How many weeks of living expenses does the average American have savings for?

I've heard that an average American has only enough savings to cover 3 weeks worth of living expenses. (I think it was on some radio show.)

Is it true? If so, does anyone have the source?

I'm not sure about that exact number, but that wouldn't surprise me. As a whole, Americans don't save nearly as much as they should. The usual recommendation is to save at least six months worth of expenses, and on average, Americans fall well below that benchmark. Bankrate.com in 2012 writes that:

The number of people with no money saved for emergencies has risen to 28 percent [in 2012]. ... About 1 in 5 people are slightly better off, with enough savings in an emergency fund to cover less than three months of expenses, while 42 percent of those polled say they have at least three months' worth of cash saved.

A more recent Bankrate article reports that not much has changed in the past year:

Fewer than one in four Americans have enough money in their savings account to cover at least six months of expenses ... Meanwhile, 50% of those surveyed have less than a three-month cushion and 27% had no savings at all.

These numbers vary once you break them down by income levels, but the story is basically that as income decreases, so do emergency savings. Lower-income households have less income to save, so this makes sense, but they're also more vulnerable to financial shocks in general for various reasons.1

Another article cites a Pitney-Bowes report that states:

Like I said, this probably varies significantly by state, household structure, and income level, but on average, it seems quite low. Personally, I would be more interested in seeing the median, but I imagine the story would be similar.

One interesting point comes from statisticsbrain, which says that the "average American family savings account balance" is $3,800. This is considerably lower than the figure from the Pitney-Bowes report, but the PB report just refers to "the average," which may include all savings accounts, including those of individuals.

I'll look for the underlying data on this, but taking it at face value, it would seem to imply that once you include individuals in the sample, the average balance of savings increases significantly, and therefore that individuals save more than families, on average.

Without seeing the data, however, I can't vouch for their figures, and as JoeTaxpayer mentioned in the comments, their estimate of the "average household income" seems to be confusing median with mean, so take their figures with a grain of salt. The figure they cite looks close to the median income, but they label it as the mean ("average"). The average income in the United States is closer to $70K (see p39 of this Census data table for the comparison between mean and median income).

CreditDonkey.com also ran a survey in 2012 that found that 41% of Americans have less than $500 saved in liquid assets that could be used in an emergency. I can certainly see $500 being less than three works worth of expenses for most households. As Jeremy pointed out, however, this is a survey of visitors to their site, so it isn't necessarily a random sample of the American population.

The Survey of Consumer Finances is another useful source of data. In one section, the survey asked families to estimate the amount of savings they would need for emergencies; the median estimate was $5,000 (see p16). This isn't 100% comparable to the averages listed above because it applies to a different year, it's a median and not a mean, and it's only an estimate of what families think they need, but it's something to think about as well.

It might just be me, but $5,000 seems low. Since the cost of living varies quite a bit across the country, it's hard to make a comparison, but personally, $5,000 isn't six months worth of expenses for me. I'm single, frugal, and fortunate enough to have great benefits through my employer, but even with medical expenses, I spend about $1,200 a month. If $5K wouldn't cover six months of my expenses, I can't imagine that it would cover such expenses for a family.

Another related source of information is the personal savings rate, provided by FRED. It represents personal savings as a percentage of personal disposable income, and as you can see from the chart, it's extremely low in the US. 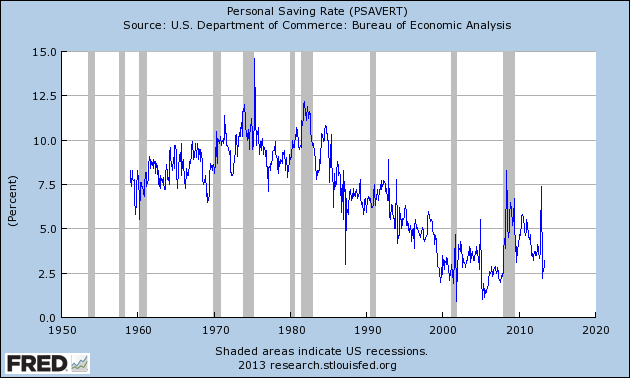 Not the answer you're looking for? Browse other questions tagged united-states savings emergency-fund statistics or ask your own question.

13
When do dual citizens (Canadian & American citizenship) need to file U.S. income taxes?
6
Less than a year at my first job out of college, what do I save for first?
11
Can a US expat have and use an HSA for the tax benefits while living abroad?
5
How and Should I Invest (As a college 18 year old with minimal living expenses)?
0
How can I budget to build up a down payment for a house over the course of a year?
2
How to strike balance between home loan, savings, investment, tax savings, marriage, retirement plan, startup & living life?
2
How to invest monthly savings for the long term?
9
How much does it cost to raise a child for the average American family?