How do I calculate two standard deviations away from the stock price?

How would I figure out how many basis points "two standard deviations" is based on the current spot price?

To compound the issue, my understanding is that standard deviation is based on a time series, i.e. historical data, but how far back should the data go? What time period should I use?

stocks trading indices standard-and-poors-500
share|improve this question
edited May 20 '13 at 18:45

The formula for standard deviation is fairly simple in both the discrete and continuous cases. It's mostly safe to use the discrete case when working with adjusted closing prices. Once you've calculated the standard deviation for a given time period, the next task (in the simplest case) is to calculate the mean of that same period. This allows you to roughly approximate the distribution, which can give you all sorts of testable hypotheses. Two standard deviations (σ) away from the mean (μ) is given by:

It doesn't make any sense to talk about "two standard deviations away from the price" unless that price is the mean or some other statistic for a given time period. Normally you would look at how far the price is from the mean, e.g. does the price fall two or three standard deviations away from the mean or some other technical indicator like the Average True Range (an exponential moving average of the True Range), some support level, another security, etc.

For most of this answer, I'll assume we're using the mean for the chosen time period as a base. However, the answer is still more complicated than many people realize. As I said before, to calculate the standard deviation, you need to decide on a time period. For example, you could use S&P 500 data from Yahoo Finance and calculate the standard deviation for all adjusted closing prices since January 3, 1950. Downloading the data into Stata and applying the summarize command gives me:

As you can probably see, however, these numbers don't make much sense. Looking at the data, we can see that the S&P 500 hasn't traded close to 424.4896 since November 1992. Clearly, we can't assume that this mean and standard deviation as representative of current market conditions. Furthermore, these numbers would imply that the S&P 500 is currently trading at almost three standard deviations away from its mean, which for many distribution is a highly improbable event. The Great Recession, quantitative easing, etc. may have changed the market significantly, but not to such a great extent.

The problem arises from the fact that security prices are usually non-stationary.. This means that the underlying distribution from which security prices are "drawn" shifts through time and space. For example, prices could be normally distributed in the 50's, then gamma distributed in the 60's because of a shock, then normally distributed again in the 70's. This implies that calculating summary statistics, e.g. mean, standard deviation, etc. are essentially meaningless for time periods in which prices could follow multiple distributions.

For this and other reasons, it's standard practice to look at the standard deviation of returns or differences instead of prices. I covered in detail the reasons for this and various procedures to use in another answer. In short, you can calculate the first difference for each period, which is merely the difference between the closing price of that period and the closing price of the previous period. This will usually give you a stationary process, from which you can obtain more meaningful values of the standard deviation, mean, etc.

Let's use the S&P500 as an example again. This time, however, I'm only using data from 1990 onwards, for the sake of simplicity (and to make the graphs a bit more manageable). The summary statistics look like this:

and the graph looks like this; the mean is the central horizontal red line, and the top and bottom lines indicate one standard deviation above and below the mean, respectively. 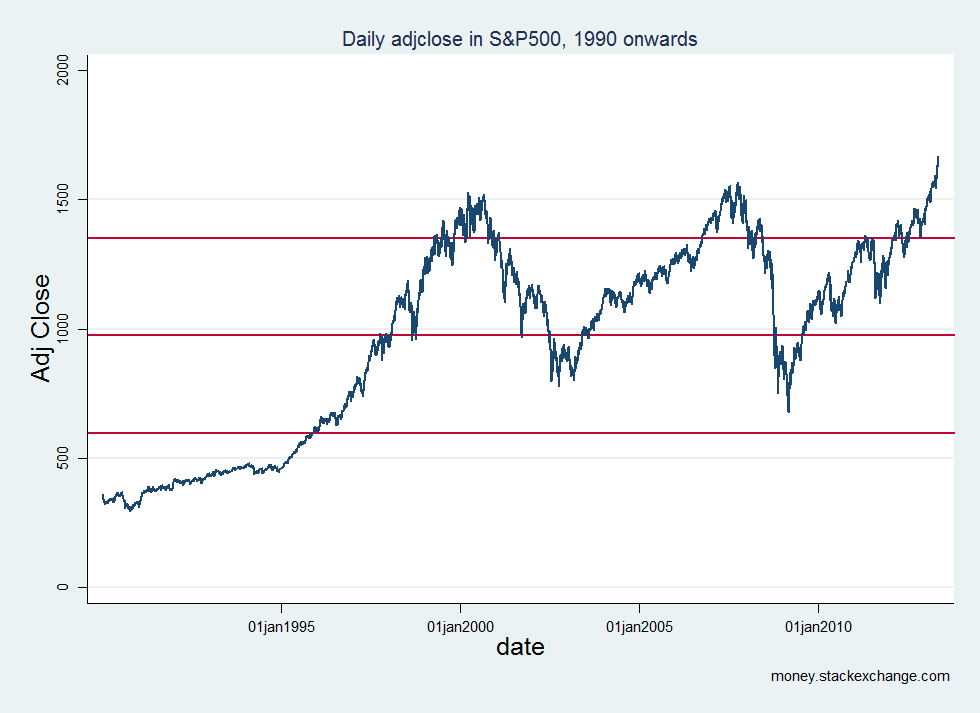 As you can see, the graph seems to indicate that there were long periods in which the index was priced well outside this range. Although this could be the case, the graph definitely exhibits a trend, along with some seemingly exogenous shocks (see my linked answer).

Taking the first difference, however, yields these summary statistics: 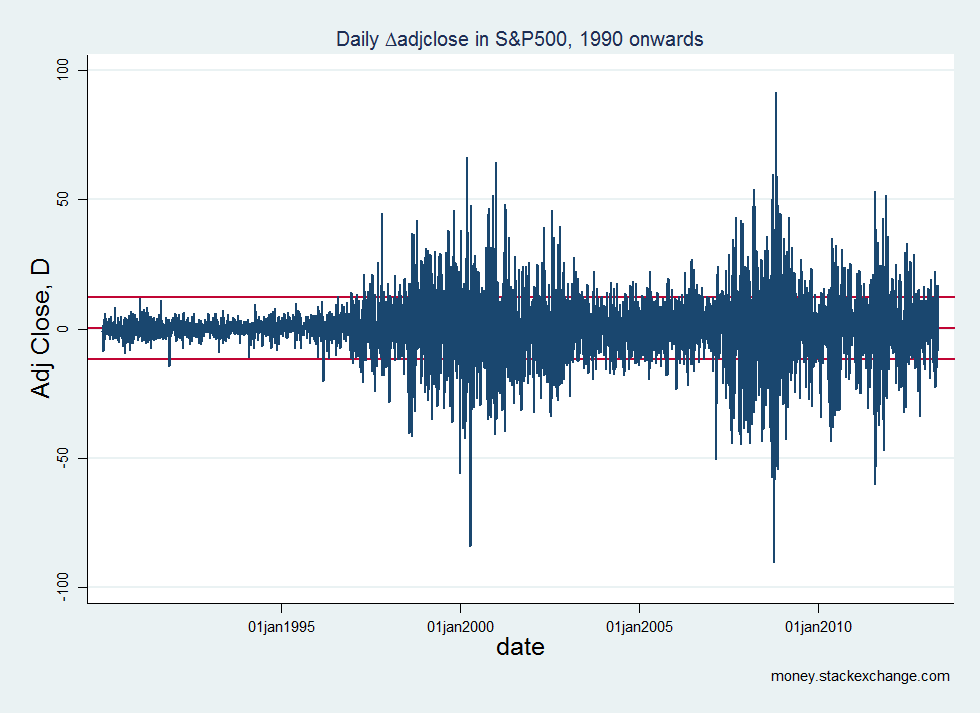 This looks a lot more reasonable. In periods of recession, the price appears much more volatile, and it breaches the +/- one standard deviation lines indicated on the graph.

This is only a simple summary, but using first differencing as part of the wider process of detrending/decomposing a time series is a good first step.

Moving averages can indirectly sidestep some of the issues of stationarity I described above because it's straightforward to estimate a time series with a process built from a moving average (specifically, an auto-regressive moving average process) but the econometrics of time series is a topic for another day.

The Stata code I used to generate the graphs and summary statistics:

Standard Deviation is a mathematical term that is useful in many areas. It can be considered a measure of how tight the data points are to the average. If there is consistency in the measurement system, then a point that is two standard from the average can be considered an outlier. It doesn't even need to be time based. We can say that a child born weighing less than X pounds is more than 2 standard deviations below the average.

Using it to look at a price or an index value doesn't make a lot of sense because many expect there to be long term growth. For example you would never say that you will buy a new jacket for your child when they are two standard deviations above their average height.

You can say you will buy or sell a financial instrument when the P/E ratio is 2 standard deviations from some average. It could be the average of the long term history, or the index, or the sector. You could do the same thing for earnings per share or many other business of financial statistics.

A standard deviation calculated from a time series assumes that the measurement will normally stay withing some bounds. And that straying from those bounds is a sign of the right time to buy or sell.

Not the answer you're looking for? Browse other questions tagged stocks trading indices standard-and-poors-500 or ask your own question.

8
How can I remove the movement of the stock market as a whole from the movement in price of an individual share?

12
When the market price for a stock is below a tender offer's price, is it free money (riskless) to buy shares & tender them?
5
Deciding between Employee Stock Option and Restricted Stock
1
Finding Annualized Mean and Standard Deviation For Portfolio
2
Backtesting daytrading strategy, how to handle the spread?
1
Can I use FOREX markets to exchange cash?
1
Logistics of Hedging INR investment with USD INR future
1
Momentum Investing Experiment and Question
2
Over what time frame should we evaluate whether an active trading strategy is successful?
0
How to calculate theoretical past trades?