Stack Overflow for Teams is moving to its own domain! When the migration is complete, you will access your Teams at stackoverflowteams.com, and they will no longer appear in the left sidebar on stackoverflow.com.

Check your email for updates.

Where can I find announcements of official GDP figures for the US and other countries?

Specifically, I'm looking at the Forex markets, and I'm waiting for today's US GDP figures. I'm keeping an eye on the financial papers, but where can I find official sources of information, maybe as they're released? I'm also interested in any other data sources that summarise this type of information, for the US and the world.

For time series of both historical and present data, the St. Louis Federal Reserve maintains a database such data, including numerous measures of GDP, called FRED. They list nearly 15,000 series related to GDP alone. FRED is extremely useful because it allows you to make graphs that indicate areas of recession, like this: 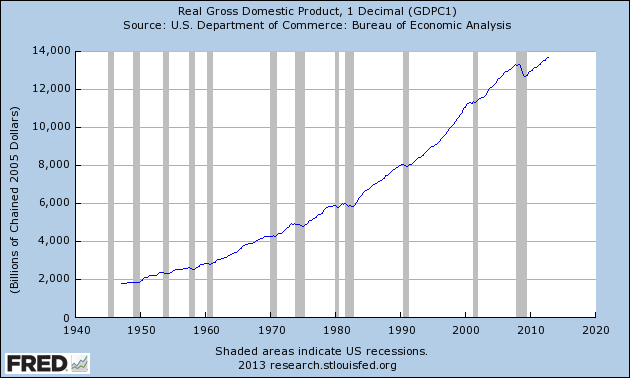 On the series' homepage, there's a bold link on the left side to download the data. If you simply need the most recent data, it's listed below the graph on that page.

If you're interested in a more in-depth analysis, you can use the Bureau of Economic Analysis as well, specifically the National Income and Product Accounts, which are most of the numbers that feed into the calculation of GDP. FRED also archives some of these data. Both FRED and the BEA compile data on numerous other economic benchmarks as well.

Other general sources for a wide range of announcements are the Yahoo, Bloomberg, and the Wall Street Journal economic calendars. These provide the dates of many economic announcements, e.g. existing home sales, durable orders, crude inventories, etc. Yahoo provides links to the raw data where available; Bloomberg and the WSJ provide links to their article where appropriate. This is a great way to learn about various announcements and how they affect the markets; for example, the somewhat disappointing durable orders announcement recently pushed markets down a few points.

For Europe, look at Eurostat. On the left side of the page, they list links to common data, including GDP. They list the latest releases on the home page that I previously linked to.

For the sake of keeping this question short, I'm lumping the rest of the world into this paragraph. Data for many other countries is maintained by their governments or central banks in a similar fashion. The World Bank's databank also has relevant data like Gross National Income (GNI), which isn't identical to GDP, but it's another (less common) macroeconomic indicator.

You can also look at the economic calendar on livecharts.co.uk or xe.com, which list events for the US, Europe, Australasia, and some Latin American countries. If you're only interested in the US, the Bloomberg or Yahoo calendars may have a higher signal-to-noise ratio, but if you're interested in following how global markets like currency markets respond to new information, a global economic calendar is a must. Dailyfx.com also has a global economic calendar that, according to them, is specifically geared towards events that affect the forex market.

As I said, governments and central banks compile a lot of this data, so to make searching easier, here are a few links to statistical agencies and central banks for major countries. I compiled this list a while ago on my personal machine, so although I think all the links are accurate, leave a comment if something isn't quite right.

For immediate availability, by far the fastest (and cheapest) way to get macroeconomic figures as they are released, is by following (verified) Twitter accounts of the respective Central bank and institutions alike. Indeed, Twitter is the new trader tape.

There are tons of data provided on the CIA - The World Factbook webpage. Among the rest, there are the GDP values as well.

9
What kinds of information do financial workers typically check on a daily basis?

7
Where can I find the dividend history for a stock?
2
Where can I find historical rates for corporate bonds?
1
How and where to get the time series of the values USDEUR?
0
How to calculate cost basis for list of incongruent batches of buy and sell transactions (forex trading)