Will there be enough money in Social Security benefits to cover baby boomer retirement? [US]

This is in a similar vein to this question. Wondering if the American old age benefits program has also taken into account the larger retiring population. Does the plan have enough money to cover retirees? Is the plan using the approach of taxing the current population to pay for the old age benefits of the boomer generation? If yes, what will it do to accommodate the current generation when it retires? If no, what measures have been taken to cover this situation?

Depending on who you trust, the Social Security fund should still be liquid for another 40 to 70 years or so, which should cover the life expectancy of most boomers.

As for what happens after that, well there doesn't seem to be a plan for that yet. A plan would require making some unpopular choices. Politicians would be forced to do something with negative political ramifications in the short term to offset a problem that isn't going to explode until long after they have left office and shuffled off this mortal coil. For most it just isn't worth the political fallout.

What is likely to happen? The same thing that is happening now. The Government is no stranger to spending money it doesn't have, the National deficit and debt prove that convincingly. Of course we are now approaching debt levels we haven't seen since WWII from the combined efforts of two concurrent wars and bailing out every industry that can afford to hire a lobbyist, and overuse of the old politician's trick of buying votes by spending people's own money on them and pretending to be magnanimous.

Of course another baby boom or drastically increasing the amount of legal immigration would also stave off the problem for a while...

How is social security funded?
The social security system works by using current payroll taxes as funding to pay benefits to retirees. Historically there was always more money coming in then what was being paid out in benefits. This changed at the beginning of March, 2010 when social security started paying out more than it was taking in (this article estimates the exact date to be around March 3 or March 4 - the chart below has the approximate date highlighted with the red circle). Due to the baby boomer generation it is estimated that social security will now be perpetually in the red unless changes are made. The recent reduction in payroll taxes will not help social security solvency. 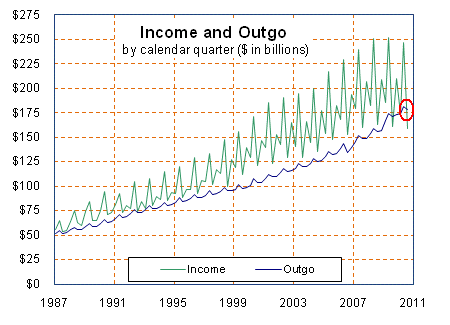 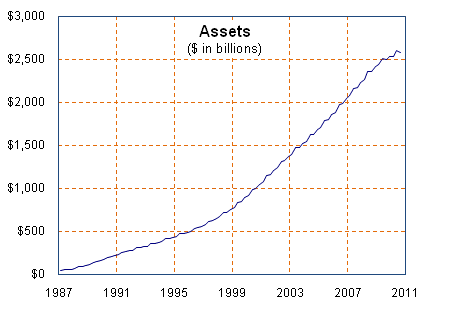 What next?
Hell if I know. The SSTF was a major purchaser of US debt over the last few decades (to the tune of $2.5 trillion). That changed in 2010. The SSTF is no longer purchasing US debt at the same time the US government is issuing record amounts of debt. The SSTF could begin redeeming its bonds to meet payment obligations. When it redeems the bonds the US treasury must cough up the funds. Where is it the US government going to get the money especially when it is currently borrowing money at record levels?

I read many articles that say that we don't have to count SSTF bond holdings as debt since we owe it to ourselves. That always makes me chuckle. The US government owes the SSTF $2.5 Trillion. I'm not the US government so don't count me in the "we" part of "we owe it to ourselves". I'm also fairly certain I will never see a dime of social security so don't count me in the "ourselves" portion either.

Charts were obtained from here.

Not the answer you're looking for? Browse other questions tagged united-states social-security pension-plan retirement or ask your own question.

5
Will there be enough money in the Canada Pension Plan (CPP) to cover baby boomer retirement?