How do small cap stocks perform vs. large cap stocks (like Dow constituents) during bear trends?

Does anyone have any good information on how small cap stocks, e.g. < $500M, perform during bear trends and/or recessions in comparison to large cap stocks like the Dow Jones Industrial Average constituents?

I'm interested in knowing if these smaller stocks tend to follow the same trading trends as larger stocks, or if they have a certain degree of isolation.

To a certain extent, small cap companies will in general follow the same trends as large cap companies. The extent of this cointegration depends on numerous factors, but a prime reason is the presence of systemic risk, i.e. the risk to the entire market. In simple terms, sthis is the risk that your portfolio will approach asymptotically as you increase its diversification, and it's why hedging is also important.

That being said, small cap businesses will, in general, likely do worse than large cap stocks, for several reasons. This was/is certainly the case in the Great Recession.

There are other reasons, some of which are industry-specific, but these are some of the basic ones.

If you want visual confirmation that small cap businesses follow a similar trend, here is a graph of the Russell 2000 and S&P 500 indexes: 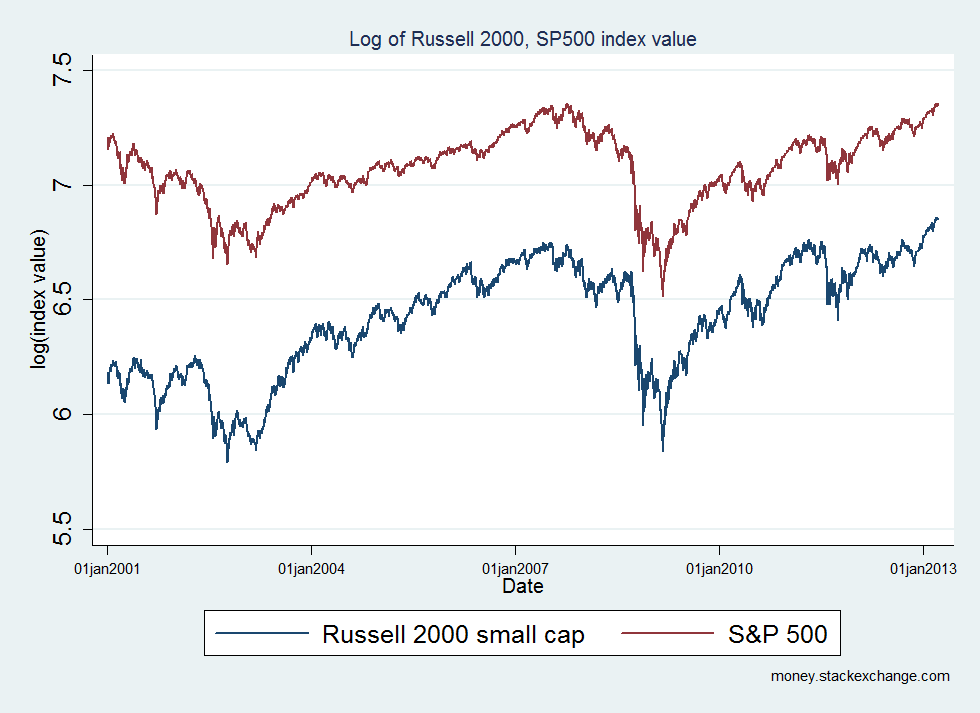 Here is a similar graph for the Russell 2000 and the Dow Jones Industrial Average. 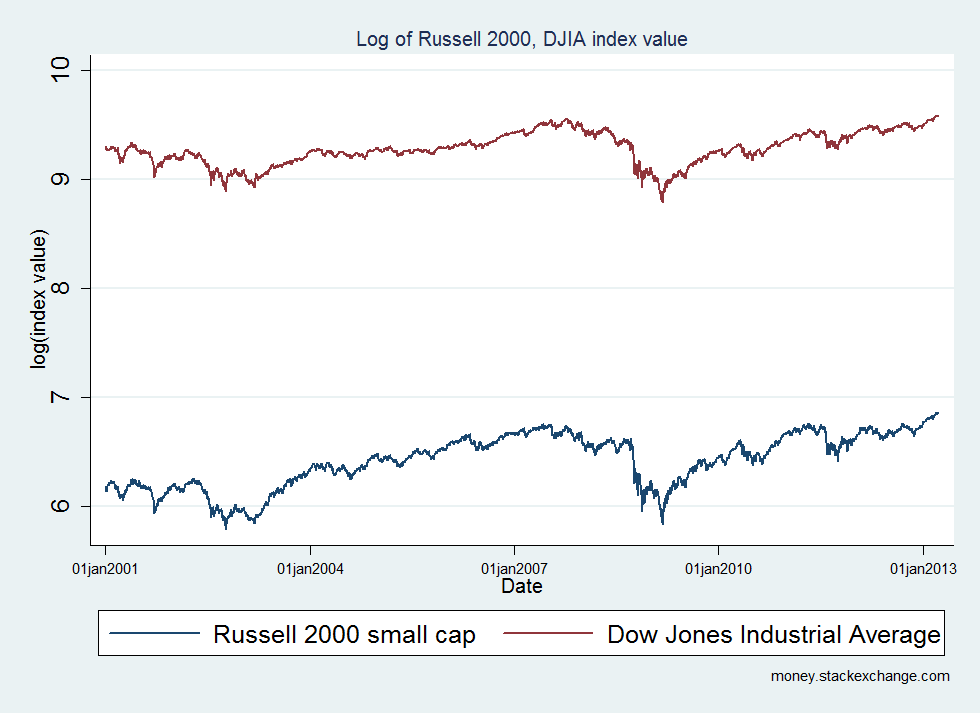 If you wanted to confirm this technically and control for the numerous complicated factors (overlap between indexes, systemic risk, seasonal adjustment, etc.), just ask and I'll try to run some numbers on it when I have a chance. Keep in mind, too, that looking at a pretty picture is no substitute for rigorous financial econometrics. A basic start would be to look at the correlation between the indexes, which I calculate as 0.9133 and 0.9526, respectively. As you can see, they're pretty close. Once again, however, the reality is more complicated technically, and a sufficiently detailed analysis is beyond my capabilities.

Just a quick side note. These graphs show the logarithm of the values of the indexes, which is a common statistical nuance that is used when comparing time series with radically different magnitudes but similar trends.

Per usual, I try to provide code whenever possible, if I used it. Here is the Stata code I used to generate the graphs above. This code assumes the presence of russell2000.csv and sp500.csv, downloaded from Yahoo! Finance, and DJIA.csv, downloaded from FRED, in the current directory.

Fidelity published an article on the subject that you might find interesting, and Seeking Alpha has several pieces related to small-cap vs. large-cap returns that might be worth a read too.

Not the answer you're looking for? Browse other questions tagged stocks investing risk diversification small-cap-stocks or ask your own question.