What happened to buyers of ABT right before the split?

Abbott Labs (ABT) split into two companies (ABT and ABBV) at the start of the new year. Shareholders of ABT on Dec. 12 received one share of ABBV for each share of ABT they owned on that date. As I understand it, that means if I bought ABT on Dec. 13, when it was trading around $65 (appx. the same as the day before), I would not receive any shares of ABBV. Yet when the stock officially split on the new year, the new ABT started trading more than 30 points down, with the remainder in ABBV.

Is that correct? If so, why would anyone buy ABT stock at that price after the 12th? Did the people who sold ABT between the 12th and the 31st receive shares of ABBV, essentially for free? If not, what did the Dec. 12th deadline actually mean?

Update: A lot of resources, notably Google Finance, only provide adjusted historical data, but Yahoo Finance does still list the actual prices for ABT at the time of the split.

As I understand it, anyone buying ABT between the 13th and the 31st did not receive a share of ABBV, yet people were still willingly paying $60+/share for a stock they knew would halve in value come the new year. Why?

The trades after that date were Ex-DIV, meaning after 5 pm Dec 12, new trades did not include the shares that were to be spun out.

The process is very orderly, no one pays $60 without getting the spinoff, and no one pays $30 but still gets it.

The real question is why there's that long delay nearly three weeks to make the spinoff shares available. I don't know.

By the way, the stock options are adjusted as well. Someone owning a $50 put isn't suddenly in the money on 12/13.

Edit - (I am not a hoarder. I started a fire last night and realized I had a few Barron's in the paper pile) This is how the ABT quote appeared in the 12/24 issue of Barron's. Both the original quote, and the WI (when issued) for the stock less the spin off company. 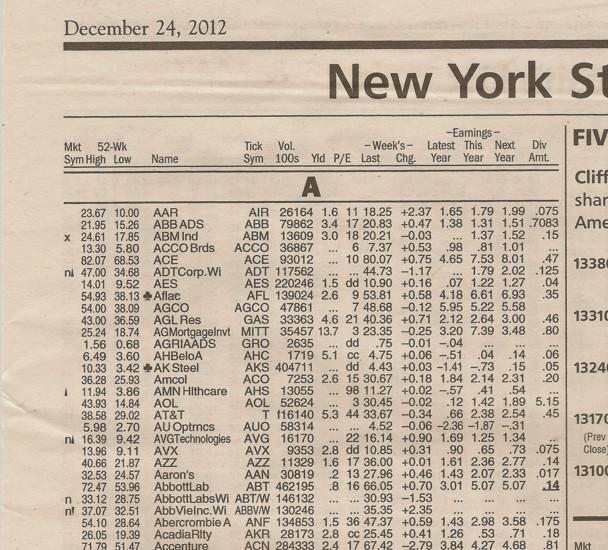 Not the answer you're looking for?Browse other questions tagged stock-valuation spin-off or ask your own question.

1
How does an enlarged share base affect share price?
10
Is there any reason to buy shares before/after a split?
2
What are the advantages of spinning off a company?
1
What happens to my restricted stock in the eBay & PayPal spin-off?
2
Salary raise: before or after the spin-off / investment?
1
Reading depth charts and mathematics of price determination
2
When Tencent spun off China Literature in Nov-17, what happened to existing shareholders?