Why did the Swiss National Bank fix the EUR/CHF exchange rate at CHF 1.20?

Due to the issues in the Eurozone, many foreign investors were buying Swiss Francs as a hedge against a Euro devaluation. They were in effect treating the Franc like gold, silver or some other commodity with perceived intrinsic value.

This causes huge problems from the Swiss, as the value of the Franc increased and their exports became more expensive for foreigners to purchase. Things were getting bad enough that the Swiss in some places were travelling to Germany to buy groceries!

To enforce this "fixing" of the Franc, the Swiss Central Bank announced that they would buy foreign currency in unlimited quantities by printing Francs. In reality, just announcing that they were going to do this was sufficient to discourage foreign investors from loading up on Francs.

As the European crisis worsened the Swiss Franc (CHF) was seen as a safe currency so Europeans attempted to exchange their Euros for Francs. This caused the Franc to appreciate in value, against the Euro, through the summer and fall of 2011. 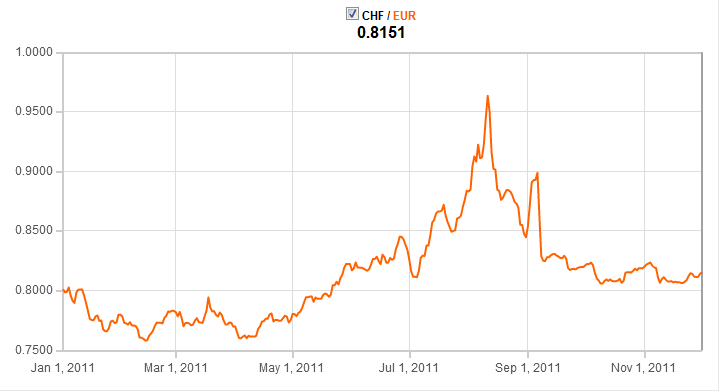 At the start of the year, when exporters urged for government and SNB action, ...

The Swiss Central bank continued to intervene in currency markets in 2011 to prevent the CHF from appreciating. This was done to prevent a decrease in export business. Finally after many failed attempts they announced the 1.20 peg in September.

Currencies are like other goods in a market in that they respond to supply and demand. Their value can change daily or even hourly based on the continually varying demands of people. This can cause the exchange rate to rise and fall against other currencies and goods. Central planners mistakenly believe that the price of certain market items (like currency) should not fluctuate. The believe there is some magical number that will cause the market to operate "better" or "more correctly".

It's not. If you look at the page you link to and change dates, it's clear the rate changes a bit. 120.15 120.1 per hundred. The Swiss can keep the 1.200 as a target and if it's higher, sell agingst the euro to bring it down, if lower, buy. If the swiss experienced a serious financial crisis and their currency fell, they may not have the power to control it, if the rest of the world said it was worth less, you can be sure it will fall.

Not the answer you're looking for? Browse other questions tagged foreign-exchange eur-euro current-events switzerland or ask your own question.

35
What are the advantages of a Swiss bank account?
1
What is forward selling in terms of exchange rates?
1
Why are prices in EUR for consumer items often the same number as original USD price, but the GBP price applies the actual exchange rate?
1
How can there be a quote for EUR/USD from 1980s?
1
beginner questions about forex trading