What does “Yield Curve” mean?

In the financial news we often read about the Yield Curve. What exactly is it? 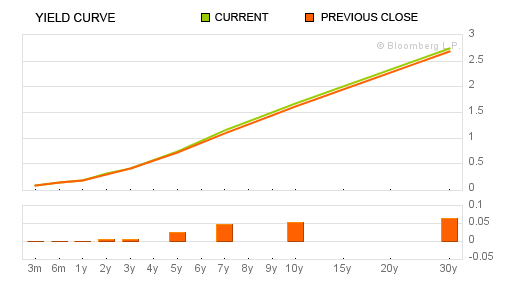 A Yield Curve is a plot of the yields for different maturities of debt. This can be for any debt, but the most common used when discussing yield curves is the debt of the Federal Government. The yield curve is observed by its slope.

A curve with a positive slope (up and to the right) or a steepening curve, i.e. one that's becoming more positively sloped or less negatively sloped, may indicate several different situations. The Kansas City Federal Reserve has a nice paper that summarizes various economic theories about the yield curve, and even though it's a bit dated, the theories are still valid. I'll summarize the major points here.

depreciation of the dollar may have increased the perceived risk of future exchange rate changes and discouraged purchases of long-term Treasury securities by Japanese and other foreign investors, forcing the yields on these securities higher.

The upward pressure on future real interest rates contributes to the yield curve's positive slope, and a steepening yield curve could indicate an increasing government deficit, declines in private savings, or reduced capital coming in from abroad (for example, because of a recession in Europe that reduces their demand for US imports).

This upward price pressure would probably increase expected inflation, and as the first bullet point describes, this can cause long-term nominal interest rates to rise. The combination of the decline in short-term rates and the rise in long-term rates steepens the yield curve.

Similarly, an inverted yield curve or a positively sloped yield curve that is becoming less steep may indicate the reverse of some or all of the above situations. For example, a rise in oil prices may increase expectations of short-term inflation, so investors demand higher interest rates on short-term debt. Because long-term inflation expectations are governed more by fundamental macroeconomic factors than short-term swings in commodity prices, long-term expectations may not rise nearly as much as short term expectations, which leads to a yield curve that is becoming less steep or even negatively sloped.

Forecasting based on the curve slope is not an exact science, just one of many indicators used.

Note - Yield Curve was not yet defined here and was key to my answer for What is the "Bernanke Twist" and "Operation Twist"? What exactly does it do? So I took the liberty of ask/answer.

Yield is the term used to describe how much income the bond will generate if the bond was purchased at a particular moment in time.

There are many factors that affect what yield creditors will accept:

Short term loans typically have less yield than longer term loans since there is less uncertainty about the near future.

Yield curves will flatten or slightly invert when creditors desire to keep their money instead of loaning it out. This can occur because of a sudden disruption in the market that causes uncertainty about the future which leads to an increase in the demand for cash on hand.

The US government yield curve should be looked at with some reservation however since there is a very large creditor to the US government that has the ability to loan the government an unlimited amount of funds.

Not the answer you're looking for? Browse other questions tagged financial-literacy interest-rate government-bonds yield or ask your own question.

12
Why did one-year notes pay more than 10-year notes during the 1980's crisis?
11
What is the “Bernanke Twist” and “Operation Twist”? What exactly does it do?
4
Why do interest rates increase or decrease?
2
US treasuries yield on economy news