Can you explain this options calls & puts quote table to me?

I was doing some research on options and I found the attached screen. I have no idea what it means. Can someone please explain the columns of the table and how to use such a table when looking up option prices? 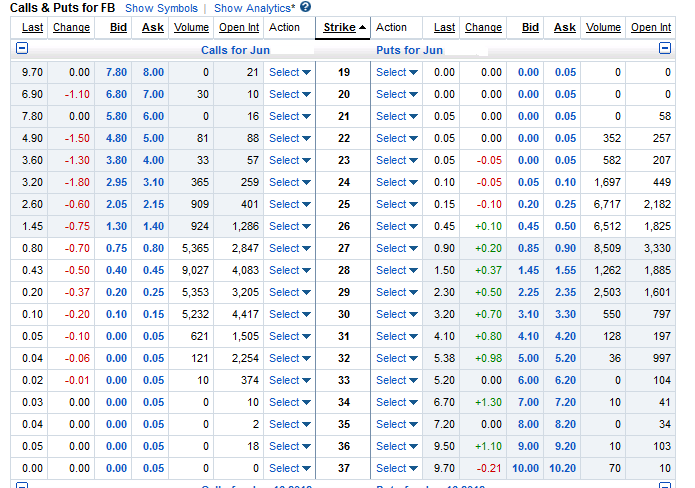 (Note: I am omitting the currency units. While I strongly suspect it's US$ I don't know from the chart. The system works the same no matter what the currency.)

A call or a put is the right to sell (put) or buy (call) shares at a certain price on a certain day.

This is why you see a whole range of prices. Not all possible stock values are represented, the number of possibilities has to be kept reasonable. In this case the choices are even units, for an expensive stock they may be spaced even farther apart than this.

The top of the chart says it's for June. It's actually the third Friday in the month, June 15th in this case. Thus these are bets on how the stock will move in the next 10 days.

While the numbers are per share you can only trade options in lots of 100.

The left side of the chart shows calls. Suppose you sell a call at 19 (the top of the chart) The last such trade would have gotten you a premium of 9.70 per share (the flip side of this is when the third friday rolls around it will most likely be exercised and they'll be paying you only 19 a share for a stock now trading at something over 26.) Note the volume, bid and ask columns though--you're not going to get 9.70 for such a call as there is no buyer. The most anybody is offering at present is 7.80 a share.

Now, lets look farther down in the chart--say, a strike price of 30. The last trade was only .10--people think it's very unlikely that FB will rise above 30 to make this option worthwhile and thus you get very little for being willing to sell at that price. If FB stays at 26 the option will expire worthless and go away. If it's up to 31 when the 15th rolls around they'll exercise the option, take your shares and pay you 30 for them. Note that you already gave permission for the trade by selling the call, you can't back out later if it becomes a bad deal.

Going over to the other side of the chart with the puts:

Here the transaction goes the other way, come the 15th they have the option of selling you the shares for the strike price. Lets look at the same values we did before. 19? There's no trading, you can't do it.

Note that you will normally not be allowed to sell a call if you don't own the shares in question. This is a safety measure as the risk in selling a call without the stock is infinite. If the stock somehow zoomed up to 10,000 when the 15th rolls around you would have to come up with the shares and the only way you could get them is buy them on the open market--you would have to come up with a million dollars. If there simply aren't enough shares available to cover the calls the result is catastrophic--whoever owns the shares simply gets to dictate terms to you. (And in the days of old this sometimes happened.)

Not the answer you're looking for? Browse other questions tagged stocks options price quotes or ask your own question.

42
Options for dummies. Can you explain how puts & calls work, simply?
7
What does this statement regarding put options mean?
2
What is vested stock and yearly dividends?
2
How to read options prices
7
How can I find stocks with very active options chains?
1
Writing OTM puts and calls with strike prices beyond reasonable
0
Question about this nasdaq table
1
2 questions about puts/calls/shorting
1
Please explain this put option