Vanguard converted many investor shares to institutional shares for their target date retirement funds: why did it create a capital gain distribution?

You need to quote from the document.

At the end of 2020, Vanguard reduced the minimum investment in its institutional Target Retirement funds to $5 million from $100 million. That set off an elephant stampede, as multimillion-dollar corporate retirement plans got out of the standard target funds and into the institutional equivalents. (Clients have to sell out of one format to buy the other.)

As big clients left, their sales caused the funds to offload some holdings, triggering capital gains—which could be distributed only to the dwindling group of investors who stuck around. Some had made the mistake of owning these funds in taxable accounts.

When items inside a fund are sold there can be taxes involved.

Spokeswoman ...said that because the Target Retirement approach seeks to reduce risk over time by automatically trimming stock positions, “these funds are best served in a tax-deferred account.”

If the money was in a 401(k) or IRA or529 or HSA this would not even been noticed by most investors. But if the investor held the funds outside a tax deferred or tax free fund they will get hit with federal and state taxes.

If you had a ton of money in these funds you were caught off guard. You received notice when you saw the bug capital gains distribution in December. Now you have to pay the taxman by April.

Based on mhoran_psprep's answer and  Caleth's comment, here's a timelime of what happened, using fictitious dates:

The blog post https://www.mymoneyblog.com/vanguard-target-retirement-funds-nav-drop-cap-gains-distribution.html contains more details on it and has a screenshot showing the capital gain distributions: 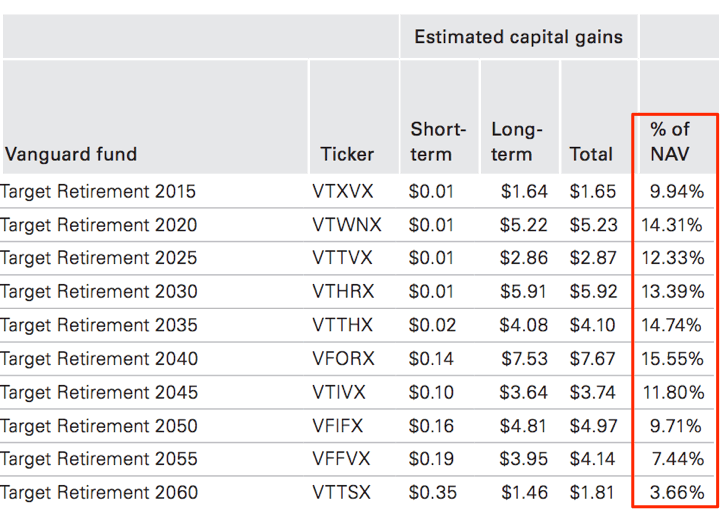 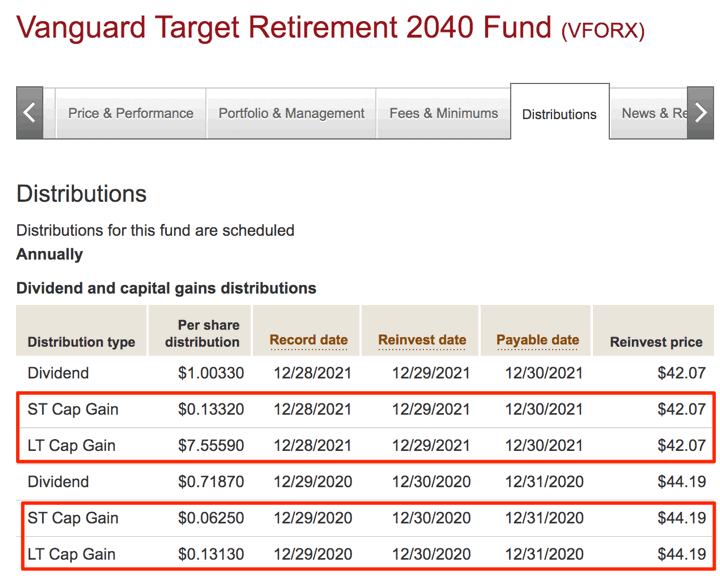 Other social network posts on it:

Not the answer you're looking for? Browse other questions tagged united-states mutual-funds capital-gain vanguard or ask your own question.

5
Why would preferred shares have less potential for capital gain compared to common stock?
8
How does Vanguard determine the optimal asset allocation for their Target Retirement Funds?
3
Why are Vanguard's 2050 and beyond target retirement date funds badly underperforming the S&P?
1
Does the creation/redemption of ETF shares by an AP when the ETF price deviated too much from its underlying securities cause cap gain distributions?