How are so many stocks tradable via Frankfurt that are not listed there?

Still it has a ticker symbol FRA:8TI and is tradable at Frankfurt.

How is this different from being listed there?

The same is true for a myriad other stocks.

"How are so many stocks tradable via Frankfurt that are not listed there?"

More than 95% of nearly 13500 stocks trading in the Frankfurt Stock Exchange (FSE) as of December 2021 are not listed there. (1) This is because FSE allows a stock, if already listed on another exchange it recognizes as a “like-exchange”, to become merely tradable easily and inexpensively. If a stock is to be merely tradable, FSE does not even require the application of the company that has issued it ("the associated company"). The multinational law firm Baker McKenzie explains this in its Cross-Border Listings Guide's section on FSE as:

The former "First Quotation Board" closed in 2012 and is no longer available for primary listings of equity securities. However, the remaining "Quotation Board" of the Open Market is available for secondary broker listings of issuers listed elsewhere and who are subject to some degree of transparency obligations at their primary listing venue. For these secondary listings, no consent by the issuer is required and the issuer is not subject to any obligations in connection with the trading of its shares on the Open Market.

Generally speaking, the FSE is one of the least expensive listing venues in the world.

One of the clauses (Section IV.§10.1) in the FSE's bylaw called "General Terms and Conditions of Deutsche Börse AG for the Regulated Unofficial Market on Frankfurter Wertpapierbörse (09.12.2019)" confirms the availability of tradability for a stock without an FSE listing in the Quotation Board market only with the application of a "specialist" (an FSE-recognized broker) as follows:

The list of like-exchanges recognized by FSE can be seen through the document titled "Liste der anerkannten börsenmäßigen Handelsplätze", available through the Quotation Board market's web page.

The Open Market (Unofficial Regulated Market) is a segment under private law; it is regulated by Deutsche Börse. This is where companies fulfill lower admission requirements and less follow-on obligations in order to include their shares in trading. Besides German shares, primarily foreign shares as well as bonds of German and foreign issuers, certificates and warrants are traded here.

One can check if a stock is trading under the Open Market status through the stock's page on the FSE which can be reached by searching for the stock's name or ticker symbol. The same page also shows the FSE market the stock trades in through the "segment" field. However, for some reason, that field comes out with specific information only if the market for the stock is not the Quotation Board market. That is, if the segment field for a stock is empty, it presumably trades in the Quotation Board market. It is possible to double-check this for any stock using the file showing the list and certain characteristics of all instruments traded in FSE.

"How is this different from being listed there?"

First, let me spell out the differences between being listed on vs merely tradable in FSE with a bit more detail. Then, I will try to explain what these differences may imply for the average retail investor.

As I have partly described before, a stock listed in another exchange can be made merely tradable, rather than listed, easily in FSE; the company that has issued the stock or an FSE-recognized broker basically only needs to prove that the stock is already listed on a like-exchange and pay the fee. Almost all such merely tradable stocks are placed in the Quotation Board market.

Having a stock as merely tradable allows the associated company or the broker to be relieved from the vast majority of the initial requirements and maintenance obligations directly towards FSE and the relevant German and EU authorities. The associated company or the broker only needs to timely communicate to FSE the important announcements the company makes. In addition, the fee to be paid as well as the time and effort required in preparing the application and its processing by FSE are reduced substantially. To give an example, an inclusion fee of only 750 euros is required for the Quotation Board market vs 32000 euros for the Basic Board market, the market with the least stringent requirements for a listing, for a stock with a market capitalization of 250 million euros.

On the other hand, for its stock to get FSE-listed, a company needs to directly prove to or file with FSE, among other things:

A company's basic obligations to maintain its stock's listing on FSE include: 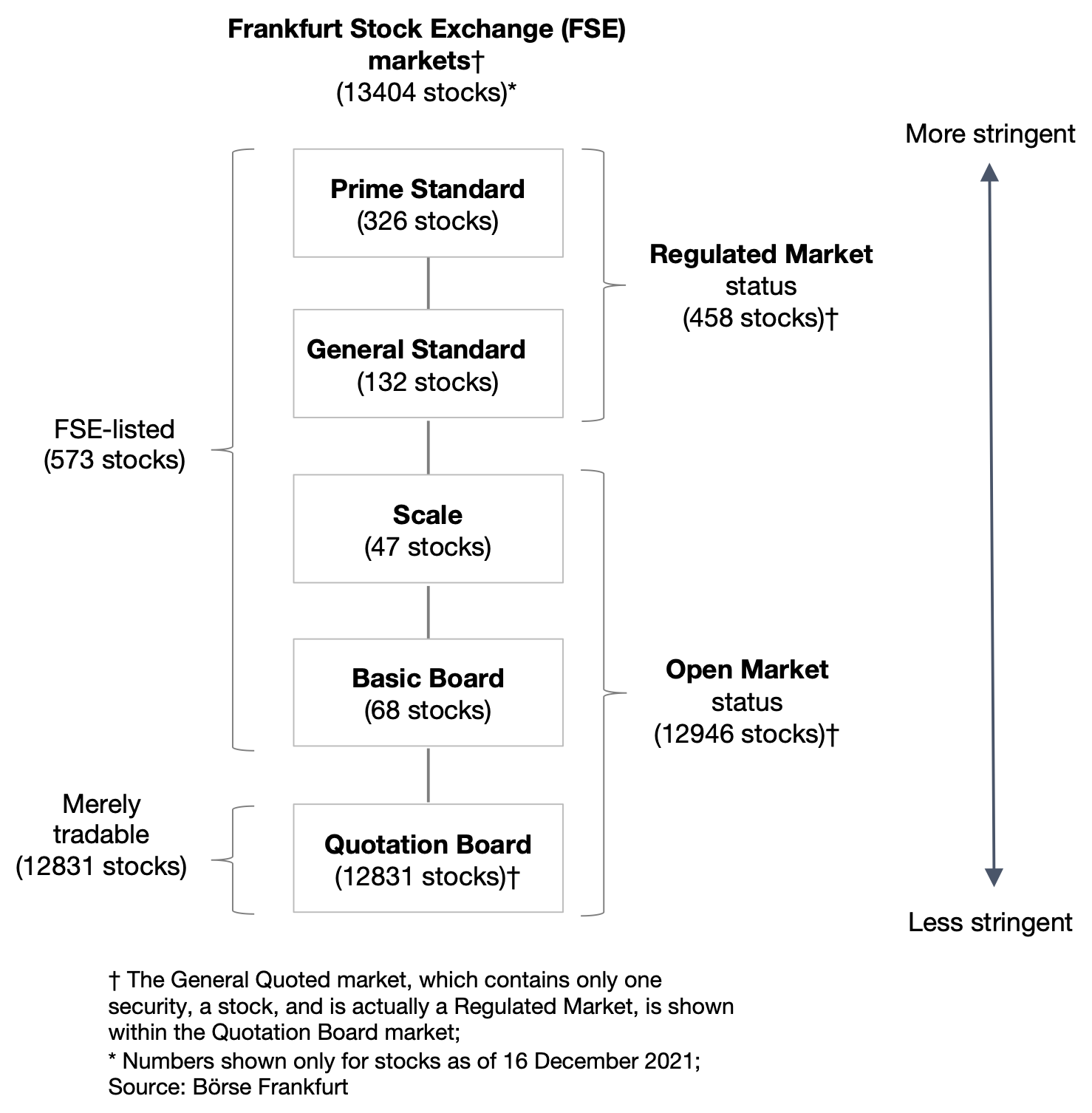 I think the implications of a stock being merely tradable in FSE for the average retail investor would depend quite a bit on how well-established its company is and which exchange the stock is listed on.

For a well-established company such as Stellantis listed on multiple major exchanges, things would matter the most to the average retail investor in terms of timely disclosure and information flow.

Stellantis maintains an investor relations site simultaneously in English, and to some extent in French, and Italian, the respective local languages of the exchanges its stock is listed on, but not in German. Any of the official documents and announcements related to the stock not being published in German by the company most probably dampens its stock's coverage by the German financial media and the local brokers. A German investor who does not speak any of the three languages would likely remain in the dark significantly more than otherwise about some of Stellantis's important financial or business developments or how the finance professionals assess such developments.

It would usually be easier and less costly to buy significant quantities of a stock through an exchange it is listed on because the stock's trading volume would usually be significantly higher and the bid-ask spreads narrower or the trading commissions higher than in an exchange it is merely tradable. Moreover, newly issued shares for or dividends paid by a merely tradable stock might be delivered to an investor, who bought the shares through FSE, with some delay as the associated broker, or a designated company, might be acting as an intermediary between the investor and the company in addition to the usual depository institutions or banks.

Before buying the merely tradable stock of a less established company through FSE, especially one not listed on a well-known exchange, I think one should be extra careful and do extra research while remaining more vigilant than usual while continuing to hold it. The listing exchange for any stock traded in FSE is shown in the file showing various characteristics of all instruments traded in FSE (check out the "Primary Market MIC Code" field).

Finally, while it appears to be the most prolific one, FSE is not the only major exchange that allows stocks it has not listed to be traded. London Stock Exchange (LSE), for example, has a total of more than 7000 stocks, including Stellantis, available for trading. I reckon only 20% to 25% should be considered as listed on LSE. I recommend to those who might be involved in multiple exchanges worldwide to check out HMRS's (the UK's tax collection and customs agency) web pages showing which markets of which exchange HMRS considers to have the listed stocks for that exchange. (2),(3) HMRS's assessments may not be fully in line with some other assessments or even up to date in some cases but they might be a good start or at least help in comparing notes.

How are so many stocks tradable via Frankfurt that are not listed there?

The Frankfurt Stock Exchange has a "Freiverkehr" ("Open Market") segment for trading in such securities. The Open Market is classified as a Multilateral Trading Facility (MTF) according to European Union MiFID rules. Such a facility allows trading in securities at a trading venue (e.g. Frankfurt Stock Exchange) without requiring the security to be listed at that trading venue. In effect, once a stock is listed on a stock exchange, it can then trade at any MTF.

To understand the historical developments that led to this situation, read the illuminating answer by user "kurtosis" to this question: Can US stocks list on one stock exchange but trade on other US stock exchanges?. Although the thread is US-centric, the answer by "kurtosis" briefly mentions the situation in Europe.

Not the answer you're looking for? Browse other questions tagged stocks stock-exchanges germany or ask your own question.

3
Is there a regulatory reason that only AEX has daily options
8
Confirming that stocks are listed under my name
11
Company stock listed in multiple exchanges?
3
What is the difference between a stock/share listed on London stock exchange and New York Stock Exchange
0
Is there any way to understand all the codes/names/symbols that describe an individual stock?
0
Why does IB show Equinor ASA under STL@OSE if the OSE symbol is EQNR?
1
Who/What keeps the record of the possession of stocks?
0
What is "Boeing Co. Com Stk USD5 (CDI)"?
0
What is happening when a company wants to trade on a new stock exchange