How do you read a Total Returns chart?

I know that I'm asking a stupid question, but I must admit that I'm lost. I've recently discovered a N225TR - i.e. the Nikkei 225 Total Return - graph and I just can't read it. I know that the y-axis shows the total return from the Nikkei, but what is the relationship between that and the x-axis? For example, the y-value for September 1, 2019 seems to be about 33,000, but what does that mean? 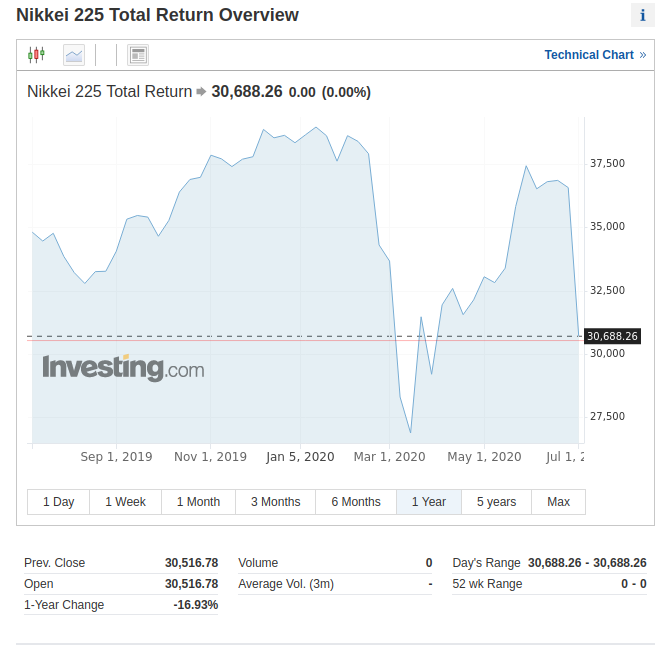 First, a few warnings (so that you know what to do if you decide to use in the future the series in the graph you have shared):

How do you read a Total Returns chart?

First of all, the chart you have shared does not show the (percentage) returns or something similar. It just shows an index ("Nikkei 225 Total Return Index") whose daily values are the (simple) arithmetic averages of the corresponding daily closing prices of the stocks in the Nikkei 225 index. These averages, however, are rebased from an initial value of 6569.47 as of December 28, 1979 and adjusted for certain events. This value, for technical reasons, is the same as the (main) Nikkei 225 index's value as of the same date. The adjustments are due to corporate actions, such as stock splits and dividends, and the stocks added to or dropped from the Nikkei 225 index since then. You can learn more about Nikkei 225 Total Return Index from its official web page if you like.

Nearly all most-quoted versions of popular stock indices, including Nikkei 225, are the versions called "price indices" and there are usually many other versions such as "net return" or "total return”. These are created to better cater to different needs of the investors. The main difference, for example, between these three is usually based on how dividends are accounted for. In a "price" index, the index values are not adjusted for most dividends whereas in a "net return" or "total return" index, the index values are adjusted by assuming any dividends distributed by the stocks in the index are reinvested (net of or with no taxes) back into all of the index stocks. Calculating the performance of a stock index using its "net return" or "total return" version rather than the "price" version is considered to be more realistic, especially over the long term.

Now then, I think it would be better to rephrase your question as "How do you read/use a Total Return Index chart?".

Well, the answer is like any other stock index! That is, one takes any two values of the index at any two different dates and calculates how much the index has changed in percentage terms from the earlier to the later. Let us exemplify this by using the second question in your post.

On another note, if you are interested in Japanese stocks, I recommend following a free-float market capitalization-weighted index similar to S&P 500, such as Topix 500 or Topix (all stocks) instead of/in addition to Nikkei 225. Nikkei 225, while quoted often in the financial media, is quite similar to the Dow Jones Industrial Average, another price-weighted index (also the reason why Nikkei 225's other name is "Nikkei Stock Average") and rather a relic of the past in my view.

Index values often don't have a meaningful interpretation. They're typically some weighted average of prices of various stocks. Many are weighted by market cap, but others are equally weighted or may have some other weighting.

What's important is the relative change in the index over time. You can see that since about July of 2019 (the start of the x-axis) the index fell slightly, then rose, then fell sharply, recovered, and fell again. IF you take the actual values over time you can calculate the relative change over time (e.g. right now it's 0.0% since it's about back to the beginning value).

No, the y-axis shows a quantity ("total return index") that is defined so that its percentage change from one date to another equals the total return of a portfolio invested in the Nikkei 225 for that period.

A total return index (for the Nikkei, the S&P 500, or any other portfolio) is an artificial construct. Its value on any given day is not determined by the prices of assets on that day. Rather, the total return index is calculated from its own value on the previous day, accounting for the daily movement in stock prices and any dividends paid by those stocks. The latter part (dividends) is where the total return index differs from the ordinary "price index" (e.g. the commonly quoted Nikkei).

The absolute normalization of the total return index is arbitrary as long as it remains consistent. That is, you could multiply it by a constant factor over its entire history and it would remain an equally valid total return index. It is likely that the Nikkei 225 Total Return was defined to equal the ordinary Nikkei 225 as of some date in the past.

Another way to understand it: If you invested $1000 in the Nikkei 225 on date X when the total return index was N225TR(X), and kept that portfolio with dividends reinvested until date Y, your resulting portfolio value would be N225TR(Y) * $1000 / N225TR(X).

The Nikkei is a price weighted index of 225 firms. So, to provide a smaller example of three firms, if they had a price of ${3,5,7}$, then the index would be $5$ as long as no stock splits or stock dividends happened. It is the simple mathematical average of the prices. If a stock split or dividend happens, then the denominator would have to be changed to make it equivalent to the prior index. Because of that, you cannot just add up the prices and solve it yourself, but it is basically an average.

A single yen is about one penny in U.S. money, so the Nikkei looks like a big number.

To calculate a return without dividends, take the future value of the Nikkei and divide it by your starting value. After that, subtract one and multiply the result by 100% to get the percentage return.

It won't quite match what you end up with what you would have if you bought all 225 members of the index, even if you didn't have to pay commissions, because of the correction factors that have built up over the decades. It also does not include dividends. Any company paying a dividend would have a higher return than its composite value in the Nikkei because the dividend component of returns is not considered.

Not the answer you're looking for? Browse other questions tagged stocks market-indexes chart japan or ask your own question.

4
How is the average return rate of the S&P 500 annual return calculated?

3
are there any special procedures for managing non-petty cash?
1
How do I create a Custom Bar chart report in GnuCash?
1
Calculating returns across multiple securities and time
5
Historic variation in FTSE100 total market capitalization as a proportion of the FTSEAllShare total market cap?
3
How can I figure out how a stock's price would change after I buy shares?
3
Are 'annualized return' and 'annualized total return' synonymous?
2
Why are these 2 Morningstar charts apparently different?
0
Can shareholders’ equity be more than total assets?
45
How safe it is in the long run to regularly invest in the stock market?
20
Why does the Nikkei 225 appear to be such a bad long-term investment?