Why does the DJIA take a dip on the 19th of every month since May?

My friend speculated that this might be related to options but I'd like to know the whole story. If the downward movement is predictable then shouldn't someone be capitalizing on it?

The Super Bowl Indicator, attributed to Leonard Koppett, states that a if it is won by an original National Football League team (pre AFL/NFL merger) then the market will be up for the year. If the AFL team wins, the market down will be down. In the first 23 years, it was correct 21 times or 91%.

As with your observation about the market dropping on the 19th of the month, this is just a function of randomness. If you look hard enough, you'll find other mundane events that are highly correlated (or highly uncorrelated) with the stock market.

And no, this has nothing to do with options.

My guess would be that this is simply a coincidence. Unless someone can point to an event which is scheduled for the 19th of every month and that could affect the stock market. Like if some government agency releases its economic projections on the 19th of each month or some such. If someone on here knows of such a regularly schedule event, please post.

Otherwise, as I say, I'd guess it's just a coincidence. If you look hard enough, you can often find patterns that don't mean a thing. For example, these days whenever I log in to my computer at work I get a six-digit code on my cell phone that I have to type in. I'm always seeing patterns in these numbers. Like, look, today there are three 9's, or the digits are all in ascending order, or there's all even, or whatever.

Sometimes people arguing for some conspiracy theory or mystical interpretation of events will point to such a pattern and then calculate the odds against that pattern. Like say that today my code number has three 9's. If the digits are all random, what's the probability that three or more of them will be 9's? Presumably 1 in a 1000. That's astounding odds! Surely there must be something going on that such a number would come up!

If you see a pattern like this, it makes sense to look for a reasonable cause. Can you find some event that regularly happens on that day that might plausibly affect the stock market? If so, you may have found a useful tool for your trading. If not, of course it's possible that something really is happenning and you just can't identify. See if the pattern continues. Keep looking for causes.

And sadly but realistically, if there WAS some simple cause, odds are that the professional traders would have noticed it long before you did.

I don't have a full answer to my question, but I attempted to analyze some historical data and compute some statistics and p-values recently. This post is a slight edit of a closed post that I wrote yesterday on the Cross Validated (statistics) stack exchange. The code below is in R.

The Super Bowl Indicator, which was said to be correct 21 times in the first 23 years, has a p-value of 3e-5:

The Super Bowl Indicator is still significant today, but less so (I disagree with Wikipedia that this is spurious):

Since posting my question I decided to run some experiments to estimate the actual significance of the pattern I observed. I chose to do this by looking at the times when a 5-month series of dips in the Dow has almost occurred in the past, as well as by generating synthetic data according to the modeling assumption that day-to-day market variations are independent from each other.

According to the first (historical) approach, we find that this has never occurred before. Here is a chart of the market behavior in the past 6-month period: 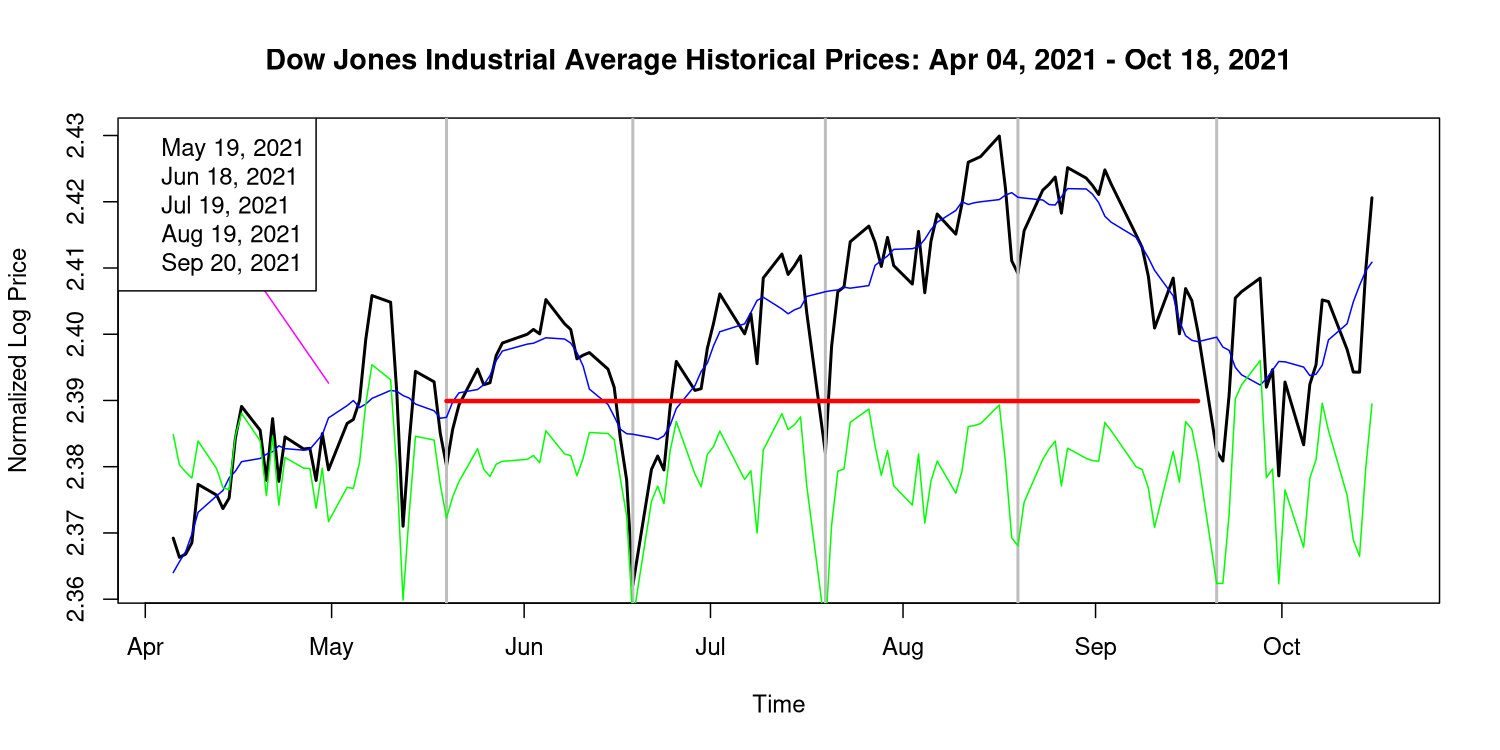 The black line shows the closing price of the Dow Jones Industrial Average and the vertical gray lines mark the 19th of the month (or closest weekday) on the months in question. You can see that the largest dips coincide with these gray lines.

Here is the same chart expanded to the full period of Dow prices that I have access to; it is from 1992, the earliest date offered to me by Yahoo Finance: 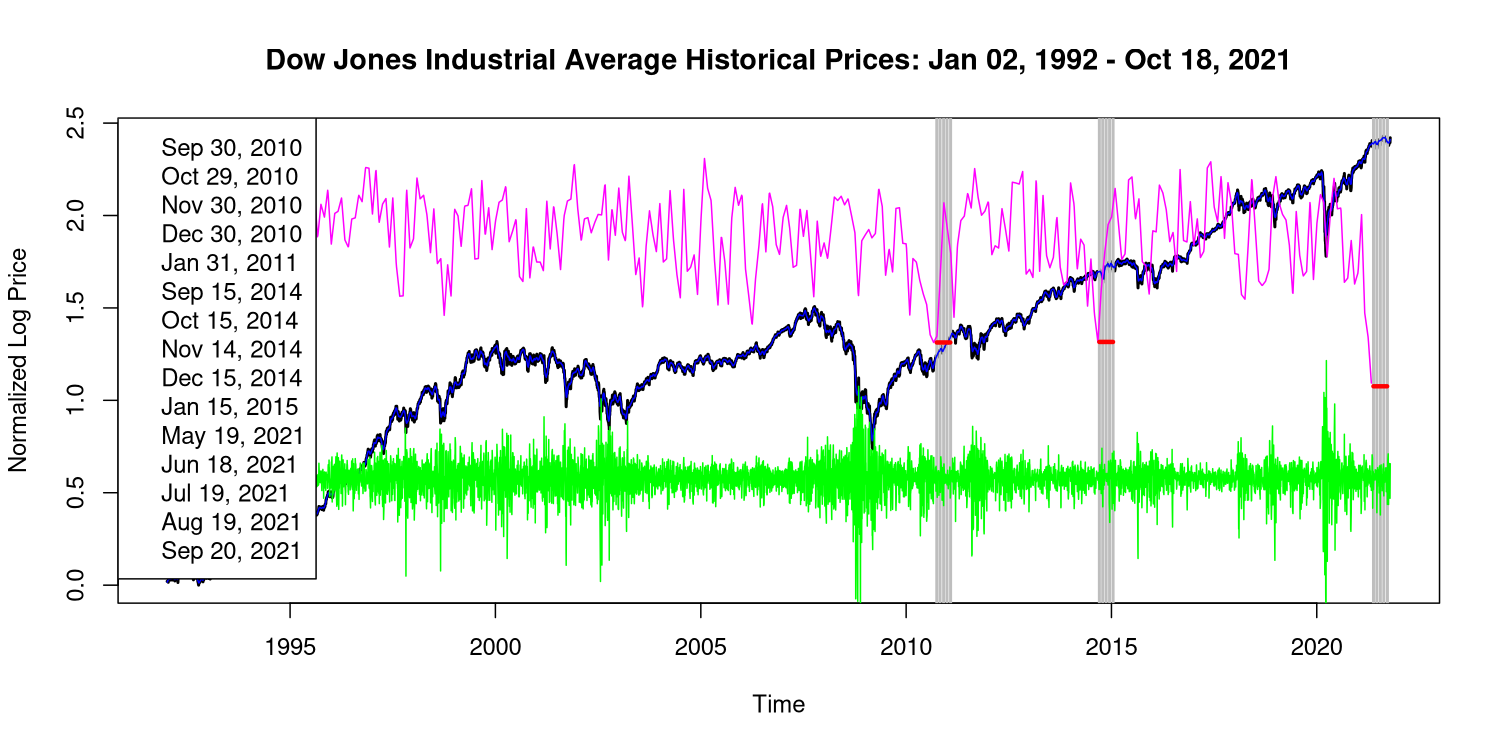 The green line shows the detrended closing price data and is obtained by subtracting a five-day average, visible in blue on the close-ups. The pink line graphs a statistic representing the extent to which one of the days of a given month is the start of a sequence of five dips occurring on the same day in the succeeding months. The thick red lines show the value of this statistic for the three most significant (lowest value) 5-month periods. These periods appear highlighted in gray.

Runners up (no pattern)

A close-up of the second and third most significant periods shows that the fit to the 5-month pattern is not as good as with the present period. There are dips missing and they are not as sharp. My statistic ranks those periods in second and third place to the present, and it is easy to see that they do not fit the pattern. This shows that what we are seeing now has never happened before. 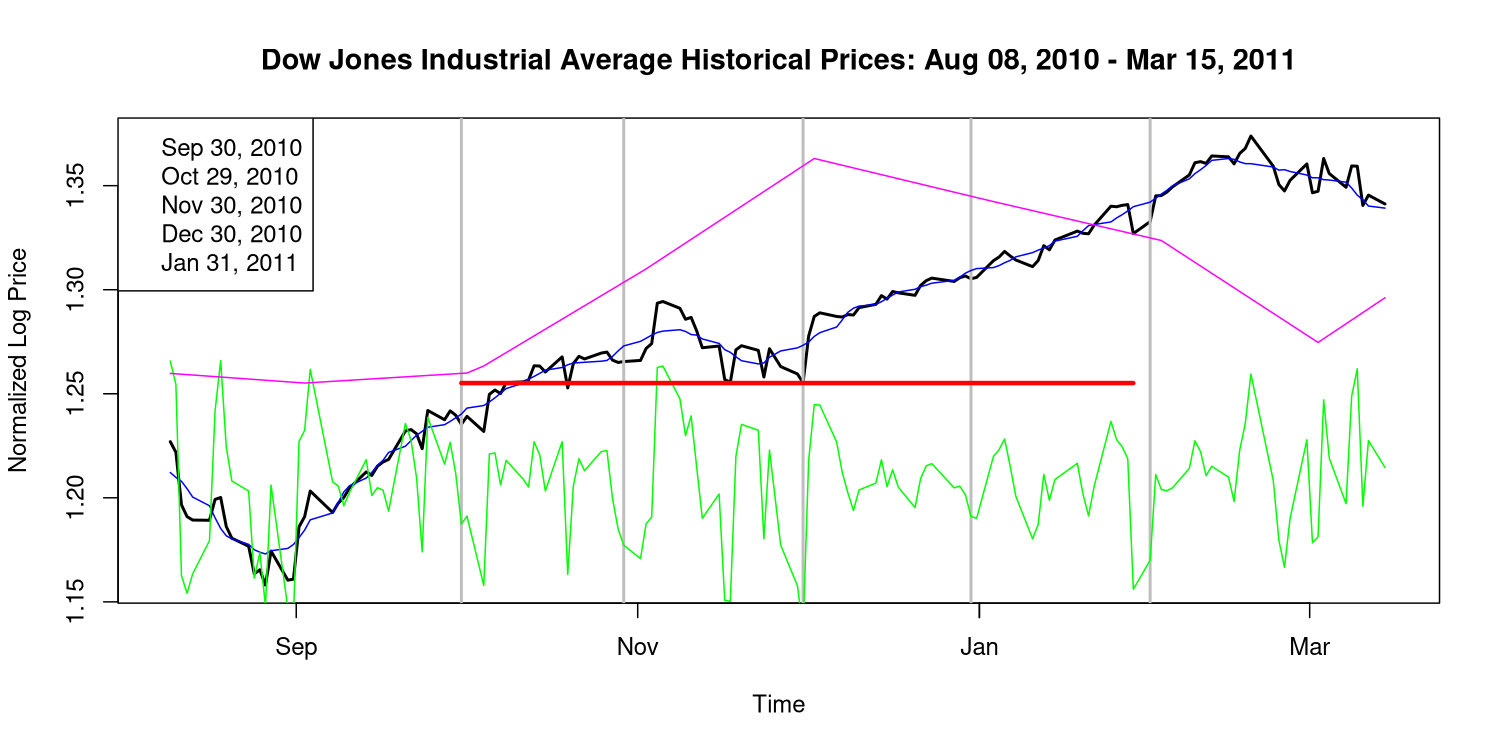 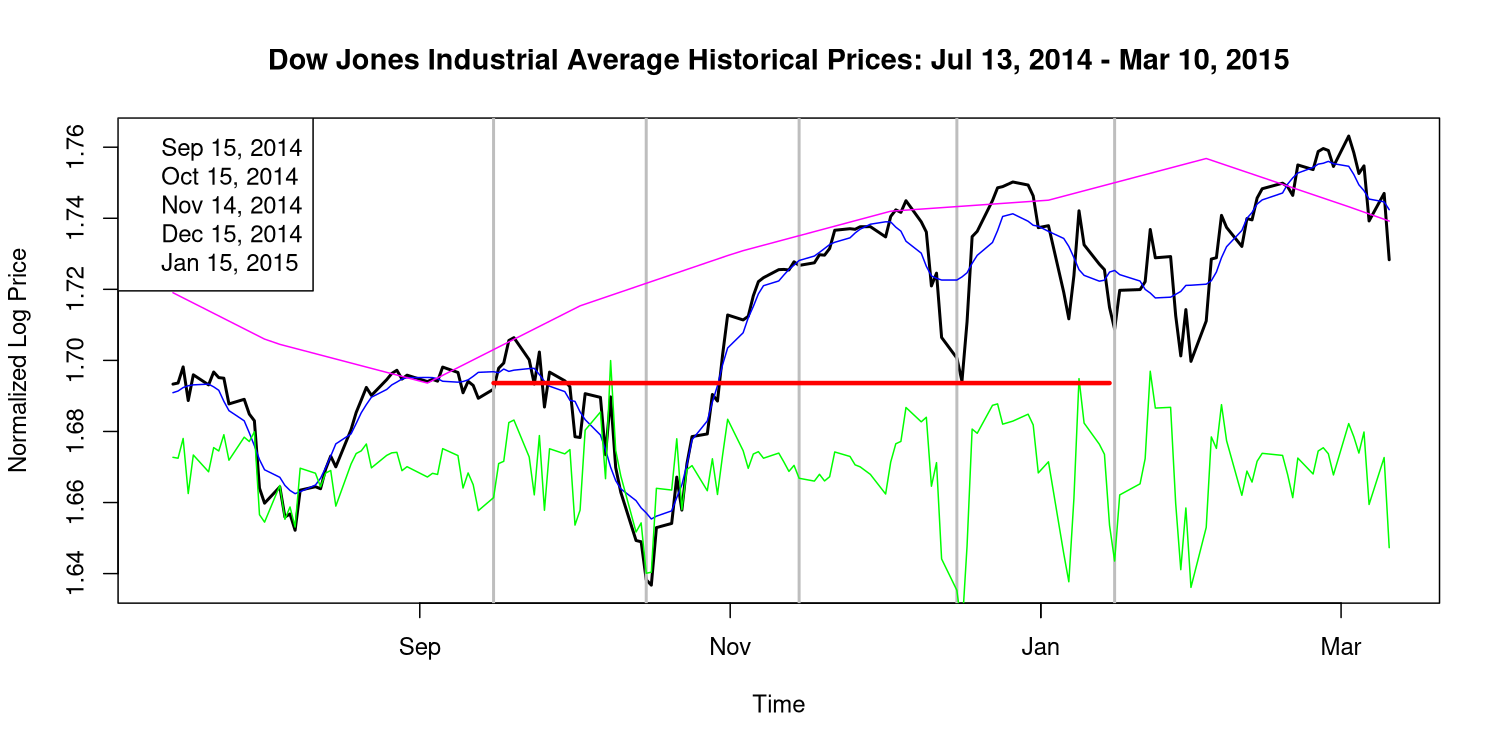 I unfortunately have no plots for the numerical experiment with synthetic prices, which I will proceed to describe. The method I used for this experiment was to select the most recent 6-month period in the data. I then generated synthetic price traces with the same starting and ending values by computing successive differences in the detrended (green line) historical prices for this period and taking the cumulative sum. The significance of the dips on the day in question is then calculated using the earlier statistic. This is done 100,000 times. None of these 100,000 synthetic price traces are found to contain a stronger pattern of dips on the 19th.

In my Cross Validated post I quoted a p-value based on a normality assumption for the distribution of the statistic on the synthetic prices. I said this was 1e-7, but I think that was in error, as I realized my code had neglected to detrend the synthetic traces. The mathematical assumptions are probably still dubious, but the new estimate is much smaller, 0.001:

Yet the normality assumption must be broken, and the actual p-value must be less than around 1 in 100,000, because the sampling experiment failed to turn up a better price trace. At least I think this is implied, my statistics is a bit weak.

And the fact that the Dow was "normal" yesterday suggests that the pattern has ended.

Not the answer you're looking for? Browse other questions tagged stocks options stock-markets put-options arbitrage or ask your own question.

13
Why does the currency carry trade work?
4
How does the Dow Jones Industrial Average (DJIA) divisor change to account for dividends?
8
Does a stock really dip in price on the ex-dividend date? And why would it do this?
2
Why does a long/purchased call option have a long position in the option itself?
4
Why does buying OTM options offer the most leverage?
0
Why does buying at market prices (ala index funds) automatically equal to the average investor?
0
Why do stocks that haved dropped since the launch still get good ratings?
1
Why does Apple issue new common stock every year (even though it has enough cash)?
2
Why doesn't every successful trade appear on the Level 2 order book?
0
Why does an option have the term "weekly"?