How can treasury bond ETF increase its value when the FED raises interest rates?

The theory about bonds say that when the interest rates raise, bonds value falls since today's bonds have a higher yield than yesterday's bonds.

However, the Vanguard's USD Treasury Bond UCITS ETF (see here) increased its value by quite a lot during the same period.

In other words, if an investor would have invested all his money 1 January 2018 in this ETF, it would have obtained a benefit selling on 1 January 2019, even though the FED raised interest rates 'a lot' during this period. Doesn't this contradict the theory?

Here's the performance of the Vanguard VGIT Intermediate-Term Treasury ETF.

Note how the value fell from (at least) July 2016 through around August 2018, which is what "the math" says should happen.

Then it jumped, even though rates were still rising, which is -- as you pointed out -- counter to what "the math" says should happen.

The only reason that would happen is that people wanted the stability of US Treasuries more than they wanted high yields.

A graph of the S&P 500 index shows that it declined sharply in the last portion of 2018. Thus, it seems that traders "fled" to Treasuries for security in that period.

The Treasuries ETF kept rising in 2019 because of falling rates.

Bottom line: the simple math equation governing bond price is NOT the only reason people buy bonds (and especially US Treasuries). 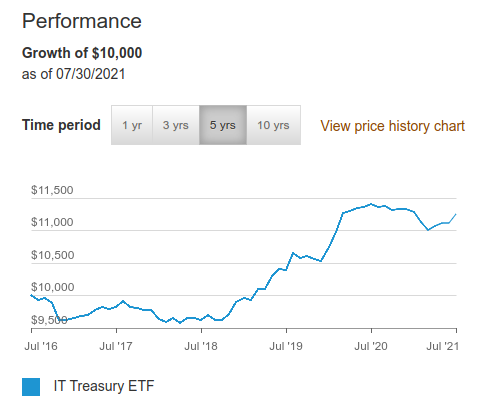 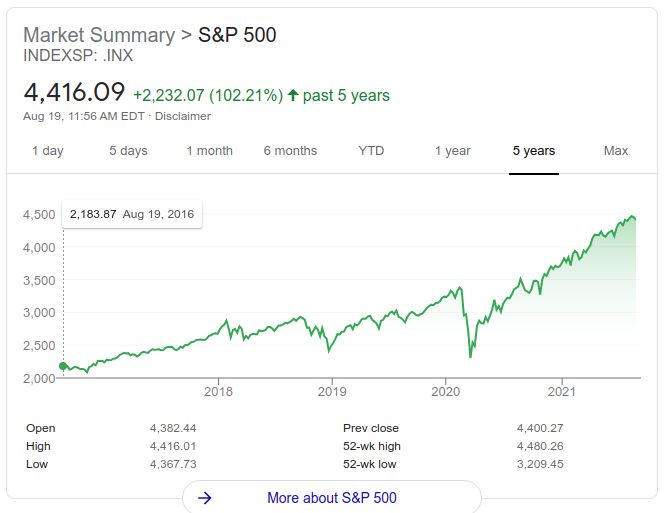 I disagree with @RonJohn analysis. The bond math completely explains price vs. yield. Effective yield (what is shown on Google Finance, etc.) is simply the annual coupon payments or dividends, divided by the market price.

As for @Martel question, the Vanguard fund mentioned has a duration of 7 years or so. The Fed changes interest rates at the short end of the yield curve. The Fed does not control medium and long term rates, which reflect inflation expectations and investor preferences.

The scenario described by @Martel, where this fund increased in price even as the Fed raised rates on the short end, seems to be a flattening Treasury yield curve. Indeed, this is what happened in 2018.

Not the answer you're looking for? Browse other questions tagged united-states etf bonds interest-rate federal-reserve or ask your own question.

6
Why can't the Fed lower interest rates below zero?
3
Deflation Risk on TIPS
4
What are the effects of interest rate changes on long-term bond ETFs?
1
Why invest in bond ETF if its trading value decreases?
3
Can you use fed interest rates to predict the share price of a bond ETF?
1
Why are bond interest rates set at the interest rate set by the Fed?
1
How is that this UK corporate bond index has gone down during the last month, if the UK interest rates are historically low?
3
Bond ETF vs stocks versus interest rates
1
How can a bond fund have a higher current yield than the bonds it contains?