What is the worst thing that can happen with my investment in mutual funds?

I have downloaded two apps namely Groww and ET Money to see the various Mutual Funds available in the market. The disclaimer reads that Mutual Funds are subject to market risks.

I am curious to know what is the worst thing that can happen to my invested amount. Say I invest a minimal Rs. 100 per month for a period of 3 years in SIP mode in any of those, in the worst case, would I lose all my amount?

Based on the last 5 years performance, a certain Mutual Fund provided say 15%. I have seen the graph sloping upwards. I understand future returns can't be precisely predicted based on past performance. And say, during the time I finished the 3 years, the graph sloped downwards, what are its results?

Edit: I am adding some screenshots to add clarity in this question. 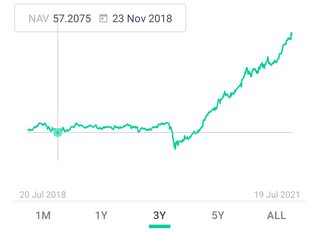 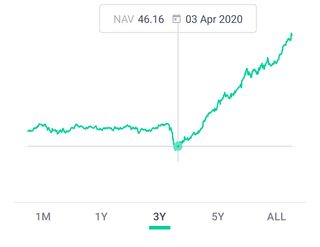 Between A and B, there are several instances where NAV is above the one at point A. Let's call these points C1, C2, C3,....and so on.

However, NAV at point B is lower than on point A. In such a case do my returns depend on all those points C1, C2, C3...where NAV were much higher? Or do returns solely depend on point B, where NAV was much lower than where I started i.e point A?

do I lose the principal amount too?

You misunderstand what investing means: when you buy stock shares (directly, or indirectly via a mutual fund) with your money, you buy those shares.

Meaning that, as far as "the market" is concerned, you have no principal left, only shares of stock.

Bottom line: brokerages are not banks.

You Can't KNOW How Risky Your Investment Is

As others have pointed out, investing in a mutual fund entails the risk of losing your money, up to and including the full amount you have invested.

But how likely is losing everything?

You can ESTIMATE Your Risk

Fundamentally, when you buy a mutual fund, you are paying someone to buy stocks for you. Stocks are simply small slices of ownership in a company.

So you can estimate how trustworthy the mutual fund company is. Does your country have laws that regulate the sales of stocks and mutual funds? How strong are they? Are they enforced? Does the company value its reputation, so it is unlikely to cheat you somehow?

Then you can look at the risk of the companies the mutual fund is investing in. If the mutual fund buys, for example, large US companies or large Indian companies, you face the risk of an economic downturn in that specific country. You personally might evaluate the risk of a major downturn in those countries one way, and I might evaluate them another. There's no way to KNOW in advance. (and anyone who tells you there is a way to know is probably trying to scam you.)

Fall to Zero is Pretty Unlikely

For a mutual fund, one business collapsing is probably not a problem. The fund manager can sell shares when it starts to drop, and hopefully growth in the other companies offsets the (hopefully small) loss you took before the manager sold.

For the whole fund to fall to zero, all of the companies in the fund would have to fail suddenly enough that the fund manager can't offload them. The risk is non-zero, but pretty low.

Generally, over the last hundred and fifty or so years, the global economy has grown. It's often wise to "ride out" a downturn by leaving your investments in place, even if they have lost value. Eventually, it is likely that the economy will recover, and you can't gain the full benefits of the recovery if you pull out your investments during the recession.

(You would have to "time the market" by knowing exactly when it's dropped as much as it is going to, and invest again when this happens - this is generally considered impossible to do consistently.)

Several good answers here with a lot of useful detail and nuance, but none actually give you the simple, no bones about it answer. You ask:

What is the worst thing that can happen with my investment in mutual funds?

You can lose 100% of your investment. That would be your worst case scenerio.

The most common way to predict future results is to look at prior results for the same fund. Nothing is guaranteed or course, but there's no other way to accurately predict what could happen.

Prior results will give you a range of expected results and the probability of those results occuring again. Obviously, the longer the history the more accurate the prediction.

So look at the best, worst, and average 3-year returns for the fund over its lifetime. You can probably expect your results to be somewhere in that range.

In short, there's very little chance of you losing all of your money in an unlevered fund (since that would mean every stock in the fund went to zero), but short of that, the actual performance of the fund is uncertain - you can only talk in vague ranges and probabilities.

Probably the worst thing that can happen is that your mutual fund turns out to be part of a Ponzi scheme, or is otherwise fraudulent. See e.g. Bernie Madoff. But even there, investors have recovered about 80% of the money they put in: https://www.ai-cio.com/news/madoff-victims-recovery-tops-80-losses/

Gains and losses are "realized" when you actual convert your investment to cash (by selling it). Whatever happened in between when you bought your investment and when you sold it doesn't count. Typically the worst case would be that you lose your investment, as described in other answers, but there are a few more detailed situations (which are generally avoidable):

The worst case financially from normal investing is that you lose all of your money in such a way that you still have to pay a large amount of taxes. I don't know the tax details for India, but there was a recent question about this in the US. It is a fairly specific situation that is largely avoidable (be mindful of when you sell), but it's still a thing that happens to people.

The other worst case is that you somehow become confused about what you're doing and accidentally invest on margin (using borrowed money), so that you lose more money than you put in. This actually happens to a lot people, or at least they claim it was an accident. Again, this is avoidable. If the potential gains are high, usually the risks are high as well, so be very careful with anything where the potential gains seem unusually high. Always read the paperwork. Understand that if you're borrowing money you will have to pay it back, regardless of if the investment turns out well or not.

The question is really about risks and profit.

For normal investments (shares, real-estate and the like), you take a risk when investing, and you gain, if the asset produced some profit. The risk is effectively that your investment loses value (independent of the reason), i.e. you night not be able to re-sell it for the same price you bought it for ("principal")

If you were 100% guaranteed to get 100% of your principal returned, that would effectively mean you have a zero-risk investment (*1). If this investment produces interest / profit, it would be highly sought after - and the price of the asset would rise - to the point that the return on investment (profit$/investment$) becomes very low. Savings accounts are an example for low-risk-but-then-low-profit assets.

As a side note.. Before, i was writing about normal investments - with which I meant investments where you buy an asset. The risk of those investments are limited to the amount invested (and very likely not the whole investment, as has been pointed out before). There are other financial instruments, in which the risk may be higher than the investment (e.g. options, or other "derivative products")

(*1)note that a zero risk investment doesn't exist - even a zero-interest bank account has a risk to it, could be e.g. bankruptcy of the bank or inflation of the currency.

The kind of thing where you lose all your capital if the "NAV is below 100" at any time/the time of redemption would be an option (specifically, binary options). These are so risky that many jurisdictions have banned them outright.

The worst thing that can possibly happen to a mutual fund investment is that you can lose all the money you invested in it, if something goes catastrophically wrong.

Note that this is not the worst thing that can happen in investing: at least your losses are limited to 100% of what you put into the mutual fund. In some cases, such as short-selling or writing naked calls, it's possible to "lose" (be liable for and required to pay up) an unlimited amount of money if things go catastrophically wrong.

This question keeps coming up. Unfortunately, the answer is not what people want to hear.

If you want to take control of your financial future, it really pays to change what you 'know' to be true.

There are -only- 2 certainties in investing (and life):

Other than that, you have to understand risk. Humans are amazingly bad at this. What's the risk of your fund's going to zero? It's definitely lower than you're chance of dying on the highway. Which one is worse? Worry about that one more. If I started investing today, my odds of losing 10% in 10 years is quite a bit lower than my odds of having a heart attack. It's irrational to worry, I'll go for a run instead.

Finally, mutual funds are not great investment vehicles. Their performance is generally lower than the broad market, and their fees are usually pretty high. I don't know the Indian market, but I'm guessing it's similar to mine (US/Canada). Our historical return is ~10-11% minus inflation. Anything lower than that is bad, anything higher than that is worse.

The best investment is for anyone young (< 50) to buy a simple index stock and forget about it. If you aren't comfortable doing that, the best investment - by far - is to invest in your financial education. If neither of those things is attractive, that's fine, but be aware you're costing your future self multiple years of earnings in exchange.

Not the answer you're looking for? Browse other questions tagged india mutual-funds or ask your own question.

10
How do I avoid paying tax on a cryptocurrency gain that I have already lost?

0
SIP when markets are good
3
What is a mutual fund "high water mark" and how does it affect performance fees?
3
Compounded Interest on Mutual Funds
1
How to calculate mutual fund return
0
How to read/understand advertised fund performance figures?
0
For a mutual fund - if jensen's alpha keeps increasing with time, then how does beta of the mutual fund get impacted with time?
1
Full year's worth of dividends and capital gains distributions even for new investors of mutual fund -- but how?