Ask Question
Asked 10 days ago
Active 8 days ago
Viewed 115 times
0
Closed. This question is off-topic. It is not currently accepting answers.

There have been articles written, Nike paid no Federal Income tax in 2020. However, looking at its Annual Report below, I see income taxes. So how are these news articles saying this?

I am seeing income taxes. 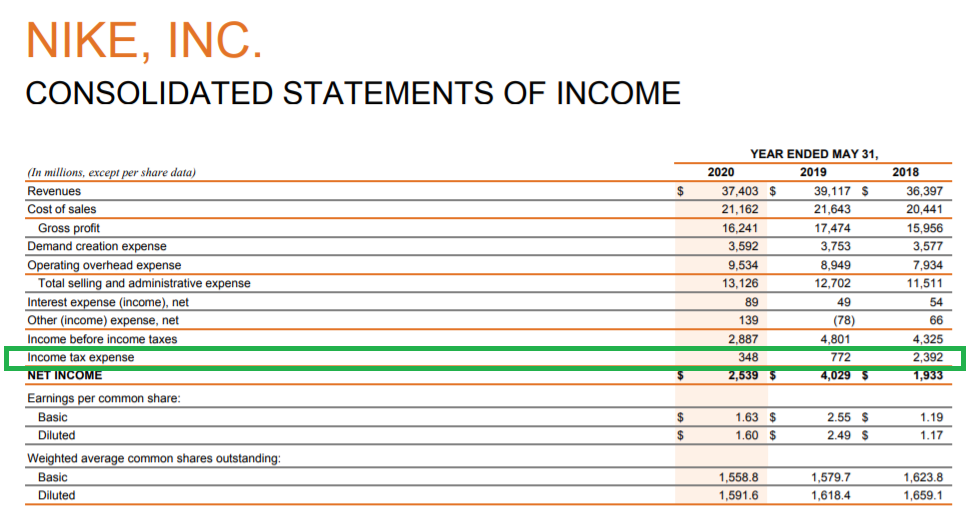 Income Tax Expense is not just Federal - it's any income tax, which for Nike includes State and Foreign taxes. If you look at Note 9 of the report you'll see a breakdown in which their federal income tax is actually negative, which may be how they ended up on the NY Times list.

Not the answer you're looking for? Browse other questions tagged united-states stocks income-tax financial-statements news or ask your own question.

4
“Back Paying” Income Taxes [U.S.]?
2
Can California state income taxes paid be itemized on federal income tax return?
3
Is there a “standard deduction” for Line 5 on Schedule A of Federal taxes?
8
Why would I ever invest in a traditional IRA over a Roth IRA
7
Moved to Canada for Grad School, Getting Heavily Taxed in U.S
0
401k Taxes (USA) — Traditional vs Roth (not IRA)
0
Why does New Mexico (apparently) require withholding more income than is required to cover state income tax?
2
Economic stimulus payment for a resident alien
1
How to designate max Fed withholding in paycheck, with 2020 W4 (allowances no longer exist)
2
My 2021 withholding has already paid 100% of my 2020 tax liability. Can I skip paying estimated taxes on self-employment income for the rest of 2021?