In the EU, 3-D Secure is more or less a must have and all credit card payments done online are secured by that what reduces fraud to nearly zero.

I know that in the past 3-D Secure (or Verified by Visa, etc.) was not common/known in USA. But how is the adoption going on at the moment? Is it common to use it to secure credit card payments online or are other fraud protection services still needed?

Same question was asked and answered on Money.SE in 2016, I am looking for the current status in 2021. Has adoption of similar protocols improved in the intervening 5 years?

My personal experience has been very low in encountering 3D secure when making online purchases. I can't say that I've seen any sort of increase over the last 10 years. I think the same concept from the linked 2016 question of "consumers don't want to be annoyed" continues to persist.

According to statistics on ravelin.com, the national average 3D Secure acceptance rate for the US is 58%. The acceptance rate is not indicative of how many vendors use the service, but how many transactions that go through the service are accepted (successful). With a rate that low, it's not surprising that vendors are resistant to higher deployment rates. Any inconvenience in an online shopping process directly relates to lower conversion rates. 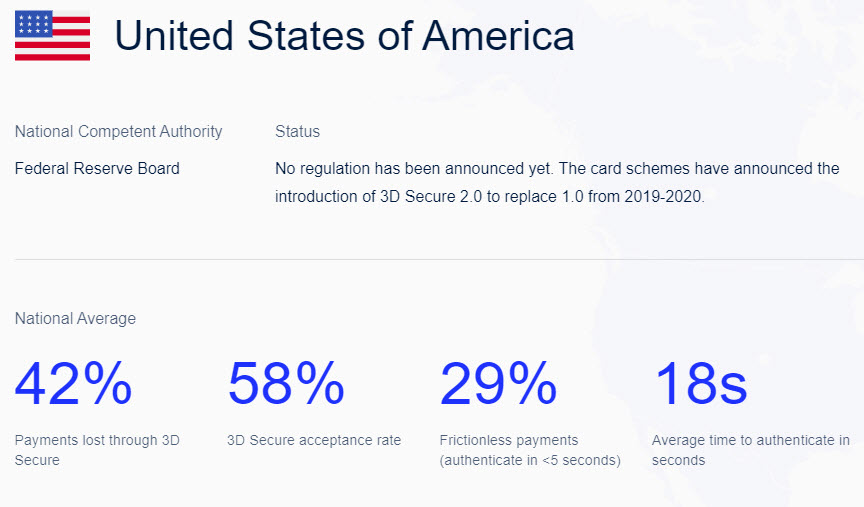 Elsewhere on their site, Ravelin gives credence to that concern based on India's experience. (They reference a TechCrunch article for this info)

when India implemented mandatory 3D Secure in 2014, some businesses reported a 25% drop in sales overnight due to the extra step in payments.

I'm not finding statistics to directly answer your question about how prevalent implementation of 3D Secure is in the US, but it seems safe to say that there has been low to no significant progress since 2016. The Revised Payment Services Directive (PSD2), which is the set of laws surrounding payment services in the EU and EEA (European Economic Area), does not apply to transactions if either (or both) the card issuer and acquirer are not located within the EEA. There is little motivation to make those improvements in the US without enforced regulations.

I will note that purchases at physical stores has had significant progress in moving towards EMV (chip instead of swipe). The US hasn't had large-scale adoption of chip and PIN for the same reason mentioned above. Consumers just aren't willing to deal with it yet.

Not the answer you're looking for? Browse other questions tagged credit-card fraud online-payment visa or ask your own question.

9
How common is 3-D Secure with US credit card users?

5
Why is my available balance and my total balance not lining up on my credit card?
17
Is it safer to send credit card number via unsecured website form or by e-mail? What safer options are there?
9
How common is 3-D Secure with US credit card users?
2
Money deducted without Verified By Visa authentication
6
Is "Verified by Visa" a setback compared to previous CC contracts?
3
How to protect from fraud when giving out CVV
12
Verified by Visa - payment site is asking for social security number