How do you best explain cryptocurrency to an 8 year old

I have a family friend with two kids. When the kids were 1 I bought them shares of stock that were transferred into a UTMA for them, figuring they had enough toys and wouldn't remember another, and 20 years of appreciation would make this a really cool gift as they grew towards adulthood. This was a bigger hit with the kids as they grew than I expected (probably owing partly to their first gift being shares of TSLA that I bought for $35ish), and turned into a bit of a tradition.

I usually swing back and forth between high risk 'fun' stuff and lower risk 'investment' stocks. This is not just to give them big swings to be excited about, and possibly big gains to enjoy, but also to help them internalize the concept of risk and understand its role in investing (and why you can't just load up on high-risk stuff). This year is a high risk year, and I decided to buy them GBTC; a bitcoin trust.

Tesla was easy. They knew what a car was and could easily understand a car that doesn't need gas. Then it led into a fun conversation about tradeoffs (cost, can't fill up at a station, etc), environment, green energy, etc. This was helped by the fact that I followed Tesla from the start and understood their product and technology very well.

They're inquisitive kids. They will ask what this stock is, I'm sure.

Bitcoin is something I have a tentative grasp of, but I'm not going to pretend I understand it well, and it's always hard to explain something that your understanding is limited in. I also need to put this in terms that an 8 year old and an 10 year old will understand.

My first thought was to talk about the history of 'money'. Talk about how long ago people would often barter, and the problems with valuation and exchanges within groups. Then talk about how gold/food became a standardized medium of exchange in ancient civilizations owing their use-value to scarcity. Then talk about our modern fiat money and how it's backed not so much by an object of value anymore but by a promise from a governing body. Then lead into digital currencies.

This feels too verbose; we can certainly dive into things after they have a basic understanding but I think they need something more succinct to dig their teeth into at first. Also, I'm also not sure what the important differences are with cryptocurrency and what really gives it value. I understand some technical details, but I don't think they will be of much value in this sort of conversation.

I want to explain in as interesting and fun a way what Bitcoin is, while also communicating what important attributes make it different than traditional currencies, in a way easily digestible to a curious and intelligent 8/10 year old.

I think the best way to explain it would be step by step, building from concepts that can be explained in more practical terms that she might understand. You may feel the below is overly harsh, but at bear minimum, think of it like this: If you can't articulate why I am wrong about the below [and while the below is quite opinionated, these are indeed opinions that I hold], you may not be ready to explain it to a child, and further to the point, you may be in over your head yourself.

And at the end of all that, I would explain to her "don't ever invest your money in something where you don't understand the value proposition in a way that you could explain it to another 9 year-old".

It's funny, but it also explains one of the most crucial parts of any popular cryptocurrency: It takes vast amounts of energy to keep the thing running, and this is by design. Any distributed cryptocurrency has to be expensive to run in order to ensure the integrity of the blockchain. Many 8 year olds are conscious of the debates over energy and climate change and this could be a very interesting topic to discuss.

It also gets at the other truth of cryptocurrencies: what they produce is very disconnected from things that an 8 year old would value. To an extent this is true of all currencies, but you're not asking how to explain money. Just like we like gold because it's shiny, there are some people who like the mathematical beauty of the blockchain and all those 'Sudokus' it has solved. But there's no defined value to those Sudokus - there's a maximum value (based on the cost of electricity and computers), but there's no lower value. Unlike other stocks, it doesn't represent things people like to buy: land, products, companies, the hours of labour workers put in. For these reasons it's very different from investing in general stocks like Apple. You're not buying a slice of a company's assets and revenue, you're buying a Sudoku with the hope someone else will want to buy it off you for more later on. Like those who 'invested' in Beanie Babies in the past, you should explain to your 8 year old that you should only buy cryptocurrencies if you really like the technology and will be content if you can never sell them back even for what you bought them originally. You could explain that some cryptocurrencies have features like smart contracts, or the ability to run programs; those things have arguably more inherent value than cold metal, but the current cost of those cryptocurrencies is still mostly driven by speculation, not the value of those services.

(BTW, if you like cryptoart and NFTs, you can buy that tweet! But don't. Because you'd just be contributing to the problem.)

This example might be good for a 10 year old.

There are 10 people in the household and they want to exchange money owed to each other for paying for external services and goods such as food/petrol/water/taxes etc. For that they devise their own IOU based currency with one IOU equal to one unit of local currency.

Two people Peter and Paul are payment processor and are entrusted to carry out transactions between different parties, each of them is responsible for four other inhabitants and themselves.

So if Alice wants to pay Bob and they are both serviced by the same payment processor Paul, any IOU will have to pass through Paul.

Paul stores all the transactions for people he manages and every so often he exchanges them with the other payment processor, Peter. So if Alice wants to pay Bart who is not serviced by Paul, she needs to rely on Paul to relay that information to Peter.

Problem with that approach is that Paul or Peter could manipulate intentionally or unintentionally transactions passing through them.

All the parties in the household meet together and witness IOUs being exchanged out in the open.

IOU transfer by Alice to Bob is direct.

IOU transfer by Alice to Bart is direct.

With distributed backend this trust can expand to many other areas, making blockchain services more transparent and in some case more democratised.

You could talk about a much older instance of a public ledger, rai stones which might be a slightly more intuitive and certainly less technical. 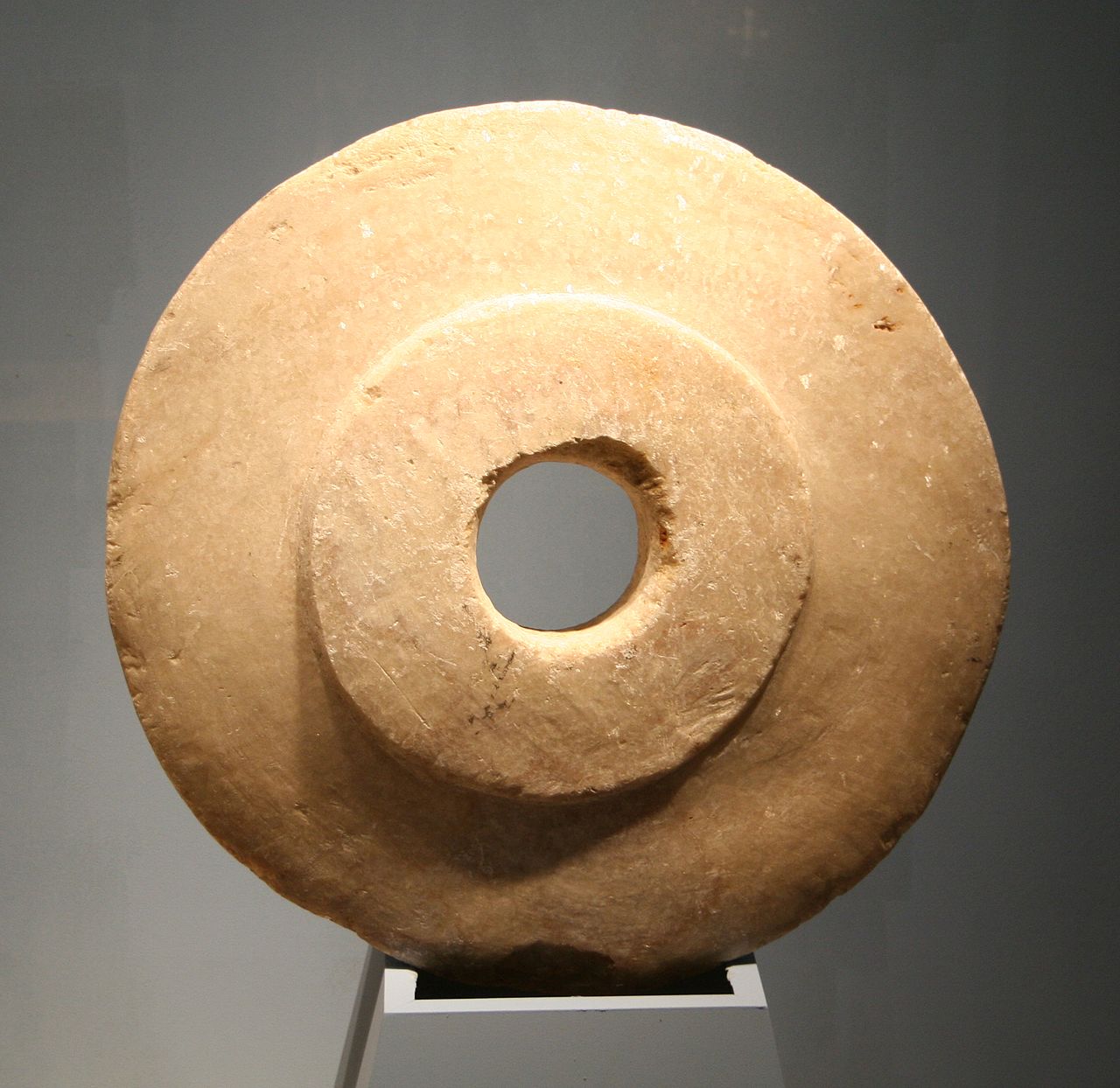 Potential problems brought up by Grade 'Eh' Bacon are absolutely valid and are being fixed out bit by bit. I'll address few here breiefly.

I think most importantly Bitcoins is really a proof of concept rather than a full fledged blockchain solution.

It becomes easy to understand by asking:

What problem(s) does cryptocurrency solve?

Or even more deeply:

What do people currently use to solve their problems, and how does cryptocurrency compare to those solutions?

Cheap, near-instant transfer of money around the world

Consider a quad-bike company based in Melbourne, Australia who needs to buy 50,000 AUD worth of parts from Japan. This would cost them $3000-$6500 just in fees to banks

"The biggest problem with electronic payment systems is fees – they can add as much as 6 to 11 per cent to a transaction, Brim says. Bitcoin charges just 1 per cent."

Whereas bitcoin could do it for 1% ($500) - so if a financial service provider could undercut its nearest competitors by 83-91%, surely that's a pretty serious advantage, right?

Banks take less of your money in fees

Something we may take for granted (until a financial crisis) is the ability to store wealth and know that it will be there (possibly some years/decades) later when it's required.

During the financial crisis of 2008, many realised their 'safe' cash and property investments were written down to a small fraction of their initial worth. This was partly because of "a breakdown in responsibilities"1, and partly because of inflation caused by quantitative easing, which involved the purchasing of $40 billion of long term securities every month in the US alone.

In any case, 'low risk' investments like bonds, and even treasury notes were shown to be not as low risk as they appeared. Investors could look into other investments, like precious metals, and even asteroid fragments. But each investment has its pros and cons, for example, holding gold comes with risk of theft or a cost of you storing it at your local bank/mint. So cryptocurrencies offer another option for storing wealth. Is it a 'better' option? Not necessarily, but it's a matter for individuals to decide

Your savings are safer from some risks

This doesn't necessarily make cryptocurrency better, but it simply makes it different, which will appeal to some, but not everyone:

When buying online via a service like paypal, the seller probably won't see that money for 90 days, and they have a risk that you could call your credit card company after 89 days and say you never received the goods. This is a big problem for online sellers. But not with cryptocurrency. So this is useful if the seller doesn't want that risk.

Prior to around 2015, major online payment providers (e.g. PayPal) were not amiable towards payments under $5. So online sellers of small, cheap, and easily delivered products (e.g. stickers, stamps) had much smaller profit margins due to extremely high fees relative to more expensive products. This meant that many online retailers and paid applications simply didn't exist, since it would not be profitable due to payment fees exceeding their revenue.

Tiny payments can be feasible (for things like stickers!)

Not the answer you're looking for? Browse other questions tagged cryptocurrency or ask your own question.

11
When and how should I pay taxes on ForEx trades?
11
Where to categorize crypto-currencies
11
How To Report Cryptocurrency Earnings?
9
Assuming 1031 Doesn't Apply To Cryptocurrency Trading
1
How is the value of (crypto)currencies determined?
79
Why has bitcoin gained so much in the past year?
1
How to report cryptocurrency fork income involving exchanges?