What should I expect from a mortgage institution?

My thought is: steady monthly payments where my interest drops by some amount each payment.

Things were fine, it appears, as one payment in their system until we started to pay more towards the principal. We had one successful principal payment and then they doubled our payments, splitting them randomly it seems.

But it also appears as mis-banking before that! HELP! Shouldn't the interest and principal be a steady downgrade??? Instead it's all over the place. 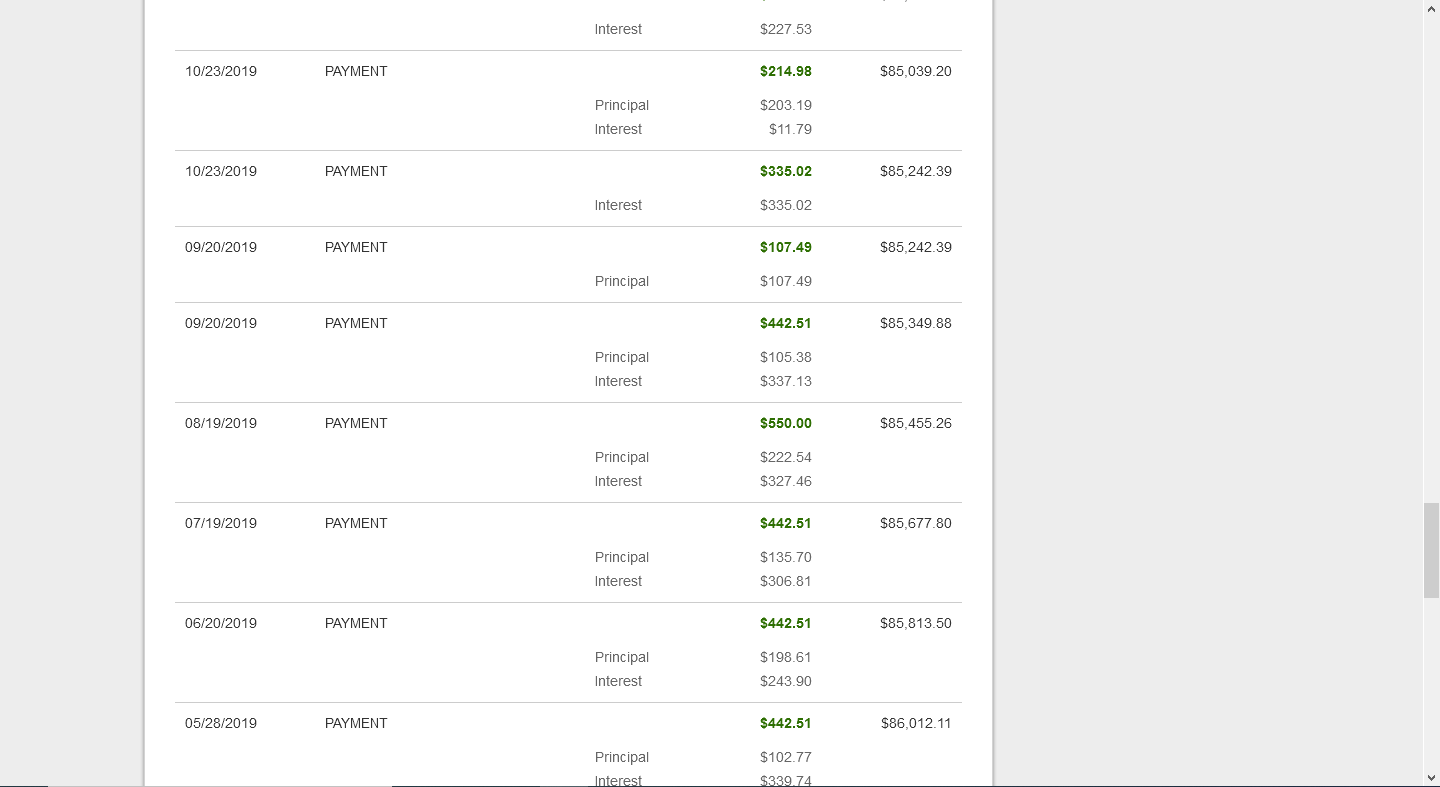 TL;DR: Doesn't look like anything sketchy is going on, just some inconsistent-looking accounting of payments.

If you are concerned, then you should really contact the lender and ask for a more detailed accounting and plai-language explanation of how the payments were handled.

If you were to make regular payments of the same amount on a regularly recurring due date (e.g. 1st of the month), then yes, the interest would decrease by a small amount each time. This is because the same interest rate is applied over (approximately) the same time period for a slightly smaller balance.

If we assume the earliest payment listed in your image (05/28/2019) was a regular, on-time payment, we see that your loan was accruing approximately $340 per month in interest. Your next payment (06/20/2019) was closer to 3 weeks later than a whole month later. The interest portion of that that payment is listed as about $244, which is a little less than approximately 3/4s of the previous interest amount. The next payment (07/19/2019) is almost (but not quite) a full month after that, and the interest is back up to about $304. If we assume that first payment breakdown is a normal amount, then this is closer to normal (it should be less than the first month, since the balance is lower, but how much less depends on the change in balance).

Your August payment with additional principal is listed as a single transaction. Presumably (my assumption, you need to confirm with your lender) the interest is higher than the July payment because it accrued over a longer period since the previous payment (19th-19th is 31 days, vs 20th-19th which was only 29 days).

Your September payment appears to have been for the same $550 as your August payment, but the lender recorded it as two entries: your standard $442.51 monthly payment, and an additional payment of $107.49. You need to confirm with the lender why that is (perhaps there was a difference in the way the payment was submitted?).

It appears (again, assumption by me, stranger on the internet; contact your lender for real answers) that this additional payment, while applied directly to principal, was credited against your next payment due. When you made your October payment of $550, the remaining $335.02 needed to bring that $107.49 up to your normal monthly payment of $442.51 is credited as one transaction; this only pays down the interest, since the interest accrued was more than that. The rest of your payment is then recorded as a separate $214.98 transaction, covering the last approximately $12 of interest that accrued that month and then paying down principal.

Assuming you paid $442.51 in May, June, and July, and then paid $550 in August, September, and October, then everything is likely in order. As to why the $550 payments are accounted for differently, you really need to ask your lender.

7
Should I pay the interest or the principal on my second mortgage?
9
Why are monthly mortgage pre-payments applied to the back-end of the mortgage?
2
Mortgage interest deduction requirements
2
Put extra payments towards almost paid off house or newer house?
3
Mortgage change of terms (lower rate) increases payment amounts
5
Am I paying too much in mortgage interest?
1
Additional mortgage payments don't automatically go toward principal?
0
Making large payment on Mortgage not lowering maturity date
15
Is it a good idea to make one additional monthly payment to a mortgage?
18
Why does the TD Bank principal portion of a mortgage payment go up and down in sawtooth? (why is interest payment on annuity in arrears non-monotonic)