Why should we expect the stock market to continue to generate returns long-term? [duplicate]

Ask Question
Asked 1 month ago
Active 1 month ago
Viewed 563 times
1
This question already has answers here:
Why should we expect stocks to go up in the long term? (10 answers)
Closed last month.

It is often said that the market is expected to go up in the long-term, even if it may be shaky in the short-term. The argument offered for this proposition is a simple visual picture of the S&P500 index. 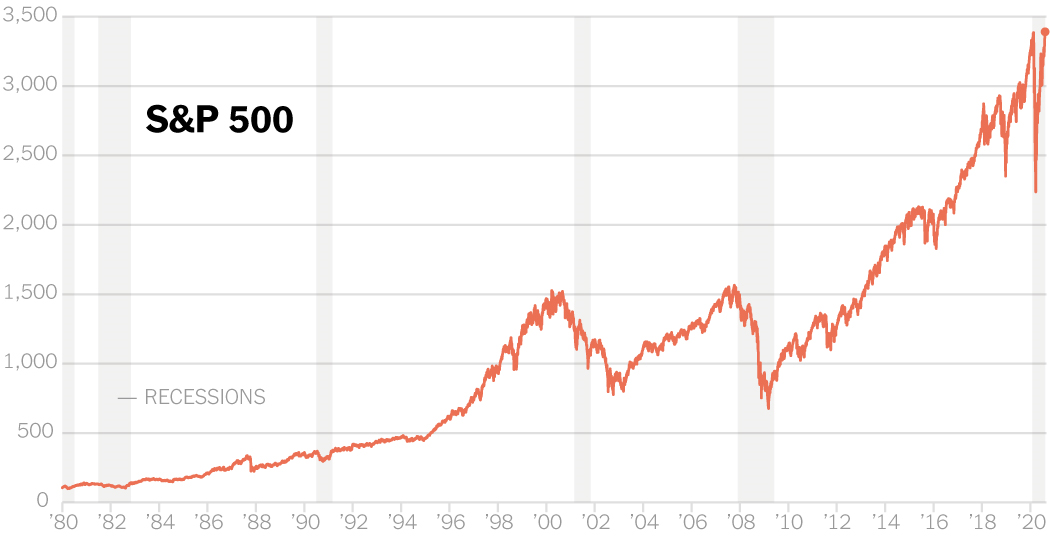 I have two counter-arguments.

My question is, what are the responses to these counter-arguments? What reason is there to expect that the stock market will continue to generate returns in the future, beyond the (unsatisfying) appeal to past performance?

Is it a myth that the stock market is guaranteed to go up long-term?

No, it is not a myth; it is a generalization. As you say, this is not intended to be taken literally, and nothing is guaranteed.

If the argument is "the market always goes up long-term", then "in this particular short-term window it didn't go up" isn't really a valid counter-argument. You're selecting a subset of data that looks like it disproves the market going up, and deliberately ignoring that it is immediately followed by short- and medium-term growth. Even if you end the graph at that 2008/2009 local minimum, that's only a local/short-term minimum. Once you consider long-term (start any time on that graph before approximately 1998), it has still gone up. Consider also that the graph you are showing only goes back about 30 years. If you look at the Dow instead of S&P (see The Market Always Goes Up for a graph, as well as one person's opinion on the market always going up), the upward trend over the long term is much clearer.

So yes, the market is not "guaranteed" to grow over time, but history has shown us that it almost always has.

Also, if you looked at a chart of the period from 1940 to 1980, you'd see similar exponential growth with a few dips that recovered after a few years.

Commodities but especially real estate are much more stable long-term investments than the market, because their worth is always tied to an actual, tangible product of value,

But equities are based on something tangible - the value of the companies that they represent. It's not some vacuous concept that has no bearing in reality. Commodities are generally more risky than equities - look at the charts of gold prices compared to the S&P and see if you'd have been better off investing in gold in 1980. Oil is back to the same price level it was at 20 years ago and is highly volatile. And yes, real estate also tends to grow, but is much less liquid and also subject to crashes (look at real estate prices in CA and FL in 2008). 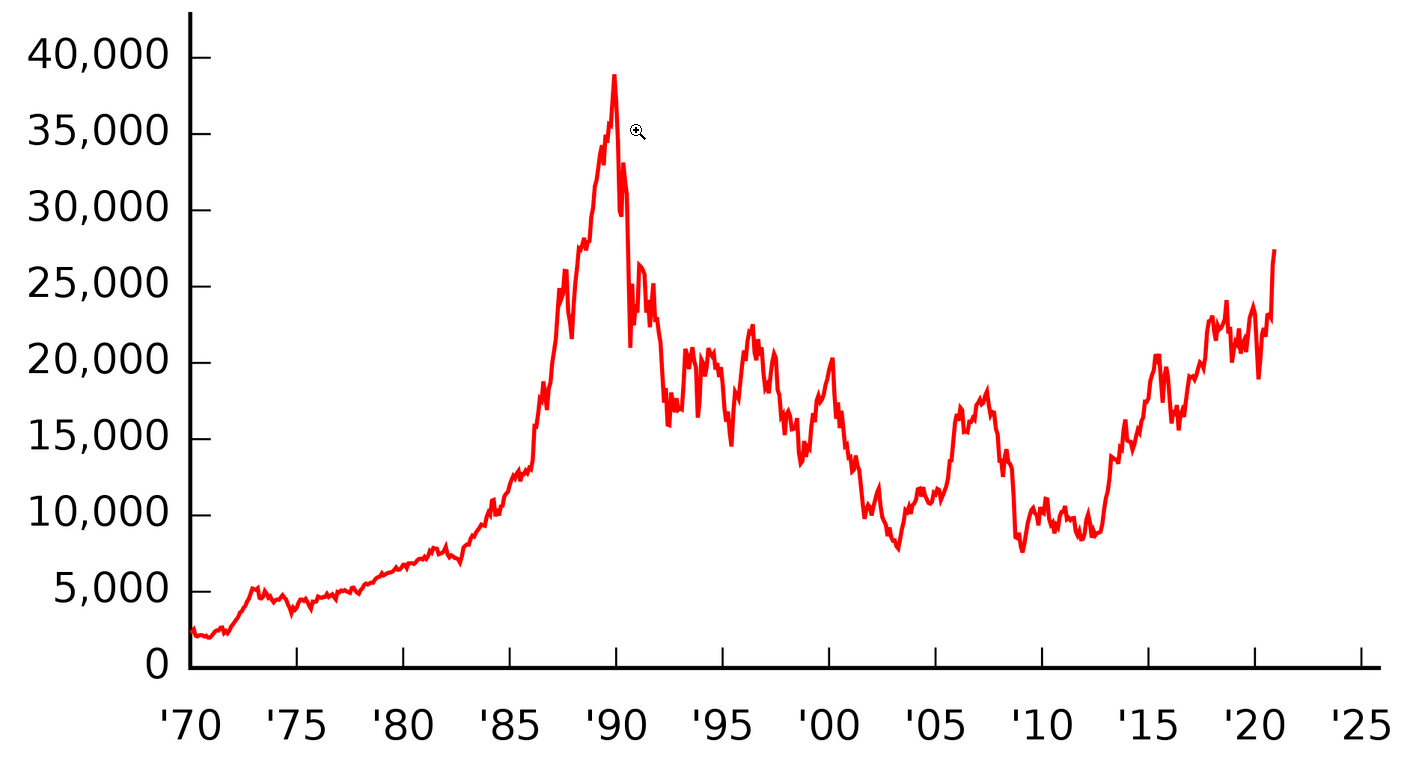 Investing in Japanese stocks is not the bumpy but sure way upwards it used to be in the US and most other markets around the world.
However, this is not an argument against investing in the stock market in general. This is more an argument for diversifying your portfolio over more than one market, even if it happens to be the largest and most important market at the moment. Japan has been the only major market with this issue since WW2.

Investing in stocks long term and strongly diversified is investing in capitalism. So far, capitalism has been a pretty big success story and economies world-wide have been adding value. In this light consider other investments. What are commodities worth if economies worldwide come to a halt? What is real estate worth if peoples wealth is decreasing? What is real estate worth if population in certain areas are decreasing? There is no sure way to invest your money and get a return that can beat inflation.

Your headline says "generate returns" which is not the same as stock price going up.

Fundamentally, stock is ownership in a business that is (hopefully) generating a profit. That profit has to go somewhere, and there are pretty much two places: Dividends and growing the business to generate even more profits down the line.

The profits from the business are the 'returns' you seek. As long as businesses are generating profits, the stock market will generate returns.

If the business pays dividends, then clearly that is a return to the investor, easy to see and measure. If the business re-invests in growth, then this may not directly show a return, since the stock may not go up in value. But assuming that the profits really do grow, then at some point the stock will have to go up or produce a dividend.

So no - stocks DO NOT have to go up over time, but if they don't it's because the market as a whole is losing productivity, and that will be a VERY BAD thing.

That the stock market is “guaranteed” to do anything is demonstrably ridiculous.

Secondly, if by “guarantee” you mean “provided human beings exist and provide value in a market” then the next question is: how long is eventually?

It’s a ridiculous statement because as soon as you start moving the goal posts to accommodate for it you realize that what you’re essentially saying is that “given an infinite amount of time, the value of the market will increase positively by any number”, which is true, but at that point chimpanzees would also have written Shakespeare.

It is often said that the market is guaranteed to go up in the long-term, even if it may be shaky in the short-term.

The argument offered for this proposition is a simple visual picture of the S&P500 index.

Although the stock market going up with certainty (sans a large-scale thermonuclear war) is a fact, the argument is flawed.

The reason for the argument is as follows:

In fact, we can estimate the returns of a stock investment today with these components.

Historically, world GDP has increased at perhaps about 2.5% but due to finite resources, in the long term growth in the future is more likely to be around 2%.

If central banks succeed in the 2% inflation target, inflation in the long term will be 2%.

Dividend yield is usually around 3% in the developed markets. There could be markets where it is lower and markets where it is higher, but for a well-diversified investment, 3% dividend yield is the approximate current level. (When calculating dividends, one needs to separate sustainable dividends from dividends that are the result of cyclically high corporate profits as those aren't sustainable.)

So, if you make a well-diversified investment, your return is going to be 2% + 2% + 3% = 7%, before costs and taxes. Someone who trades stocks a lot will see both high costs and high taxes. On the other hand, it may be possible to defer paying taxes for a long time by not making any adjustments in the existing portfolio but rather rebalancing by directing the new investments where they need to be directed.

S&P 500 is a price index. Thus, it does not include dividends. So we can estimate S&P 500 increases at about 2% + 2% = 4% per year, not 7% because there are no dividends in the index. (Of course an individual investor investing in S&P 500 index will see dividends too even if the index value doesn't take into account dividends).

Now, if you invest today 100 USD to S&P 500, will you have 107 USD one year from now? Well, you won't have for two reasons. Firstly, the US stock market (S&P 500) is one of those markets where dividend yield is somewhat lower (about 2%) so 106 USD would perhaps be a better mid-estimate. (To gain the average 3% dividend yield, you need international diversification). Secondly, stock markets fluctuate a lot in the short term, so it is more likely your investment is somewhere in the interval [20 USD, 200 USD]. But where, we don't know.

Not the answer you're looking for? Browse other questions tagged stocks investing markets or ask your own question.

113
Why should we expect stocks to go up in the long term?