Did my salesman damage my credit? What can I do?

I am in the process of purchasing a new truck. A few months ago I put a $500 security deposit down on a truck. I was told that the truck was at a neighboring dealership and that it would take 2-5 days to ship it to the dealership that I was buying from. I was told to get ready to purchase this vehicle, so I applied for an auto loan.

A few weeks later I learned that they accidentally sold the truck to someone else. So they told me that they would try to quickly find another truck. It took another 3 months for them to allocate an identical truck. By this time, my loan had expired and I needed to apply for a new loan.

Here's the problem: I reapplied for a new loan and my credit score has since dropped, presumably due to applying for another loan in a 2-3 month time period. The APR is 2% more than I was originally approved for. I am extremely responsible credit user and I have NEVER had a late payment on anything in my life. My original loan was for the lowest rate available by the bank. I feel that my salesman is somehow at fault for not securing the truck properly and caused me to damage my credit. Do I have any recourse in this situation? 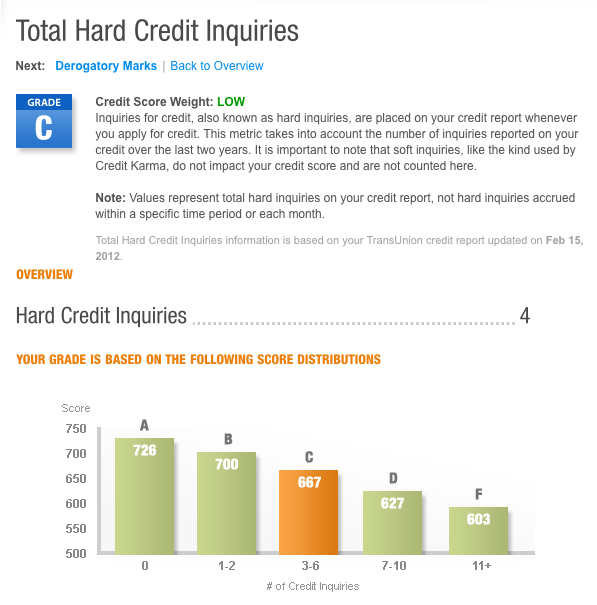 This shows the impact of the inquiries. It's from Credit Karma, and reflects my inquiries over the past two years. In my case, I refinanced 2 properties and the hit is after this fact, so my score at 766 is lower than when approved.

You can go to Credit Karma and see how your score was impacted. If in fact the first inquiry did this, you have cause for action. In court, you get more attention by having sufficient specific data to support your claim, including your exact damages.

At one point in my life I sold cars and from what I saw, three things stick out.

Long story short, you can't claim a damage you never experienced. Not having something happen that you wanted to have happen is not a damage because you can't show a real economic loss.

One other thing, When you sign the paperwork that you thought was an application, it was an authorization for them to pull your credit and the fine print at the bottom is boiler plate defense against getting sued for everything imaginable. Ours took up about half of one page and all of the back of the second page.

I know dealing with car dealerships is hard, working at them is just as hard, and I'm sorry that you had to deal with it, however the simplest and smoothest car deals are the ones where you pay full price.

Hindsight is 20/20, but I offer some suggestions for how this might have gone down.

I'm not saying I would have thought of these under the circumstances, but worth trying.

You can sue them for damages. It would be hard to convince the court that the drop in the credit score was because of that loan, but not unthinkable. Especially if you sue through the small-claims court, where the burden of proof is slightly less formal, you have a chance to win and have them pay the difference in rates that it cost you.

Not the answer you're looking for? Browse other questions tagged loans credit law auto-loan or ask your own question.

12
How often should I check my own credit score? If I do so, will my own inquiry reflect poorly on my score?

4
What can I do about recovering a vehicle that I co-signed for on a personal loan?
1
Auto loan: must make X payments before payoff
5
Family who did not make the car payments as a cosigner
60
Should I worry about having my credit pulled multiple times while car shopping?
1
Inappropriate credit report hard inquries
49
My mother co-signed for my car. Can she take it away from me if I am the one making car payments?
0
Used car loan and number of credit cards
1
I needed a co signer but my cosigner is the primary on my auto loan
5
Can Having Less Debt Lower Your Credit Score?