Parent claimed me dependent in 2019 and I did not get stimulus check. Could I get it under recovery rebate credit

I was living with my parents with no rent. They claimed as dependent on their tax forms in 2019 and before.

I never received stimulus checks in 2020, and IRS customer care told me it is due to I was claimed as a dependent.

But, I was filling my tax return on FreeTaxUSA portal, and there was the option of "Recovery Rebate Credit." Could I receive $1800 through this?

Thank you in advance! 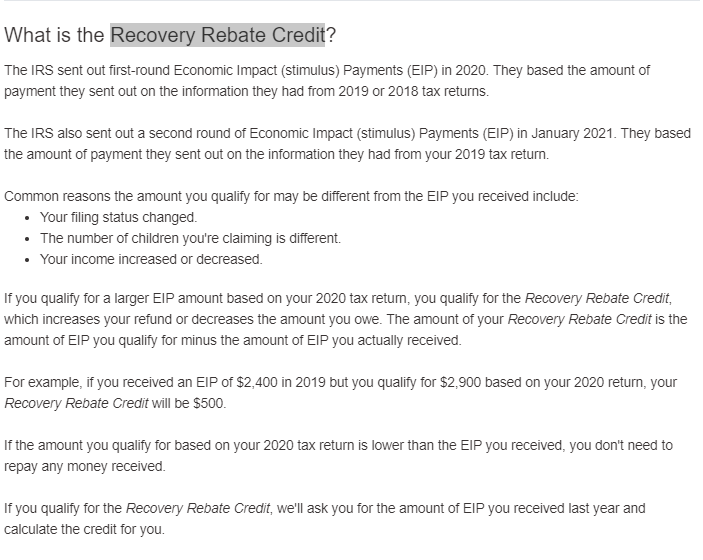 The two checks were issued based on the data on the 2018 or 2019 tax forms, but the final decision on the amount of the tax cut is based on the 2020 tax forms.

Therefore some didn't get checks and will now be made whole; some got checks but they were too small and will now be made whole; some were overpaid and are not required to pay back the government; and as what happened to me: one was too large based on 2018 numbers, the other was too small based on 2019 numbers so I don't have to pay back the overage, and they will make me whole on the 2nd check.

Many families found that their kids were too old to get the dependent check during 2020 based on the 2018 or 2019 forms because they were still a dependent in the eyes of the tax code, but wouldn't be a dependent based on the 2020 forms. These children should get a tax credit to cover the amount they qualify for based on their 2020 numbers.

The key for your situation is that they can't claim you, not that they didn't claim you. In your case, having moved out makes it easier to prove you aren't a dependent.

The recovery rebate credit is the section of the tax forms you are interested in. In a nutshell you calculate what you should have received from each check, and then compare it too what you did receive.

Some people should have received the 2nd check, and didn't because the IRS ran out of time. They stopped sending funds in mid-January. These people will also use this section of the tax forms to get any funds that fall into this category.

Yes, you could be eligible for the Recovery Rebate Credit even though you did not receive stimulus payments because you were not eligible.

The payments were sent out based on your situation during tax year 2018 or 2019. During that time, you were a dependent of your parents, so you did not receive either of the stimulus payments.

However, the 2020 Recovery Rebate tax credit is based on your 2020 situation. You said that your parents are not able to claim you as a dependent on their 2020 tax return. As long as your 2020 adjusted gross income is below $75,000 (if you are filing as Single), you should be eligible for the entire $1800. (If your income is above that, you may receive a partial credit.) This is a tax credit, so when you do your 2020 tax return this year, it will decrease the amount of tax you owe by $1800. If you are getting a tax refund, it will increase the amount of your refund by $1800.

The Instructions for Form 1040, Line 30 explain how to calculate the credit.

Not the answer you're looking for? Browse other questions tagged united-states income-tax irs stimulus or ask your own question.

1
Should I remove Adult Dependent from my 2019 tax return so they will receive a COVID Stimulus Check?
1
Stimulus eligibility check question
1
Stimulus and dependent question
1
Does claiming my parents as dependents keep them from getting a stimulus check?
8
If someone could claim me as a dependent, but they will not, am I required to check the "Someone can claim me..." box on my 1040?
3
3rd stimulus check when 2020 dependents differ from 2019
2
2019 tax return wasn't filed after my wife received an ITIN
1
How to handle a stimulus check that was never deposited?
1
Can a dependent based on 2020 taxes claim the 2021 Recovery Rebate Credit?