Paying aliments: how to consider debt from divorce itself?

It seems I may be divorced in Germany and I want to get my calculations right.

Now it comes to aliments and I use this calculator (Unterhaltsrechner). Say we both earn 2500€ and share 2 kids of age 10 equally.

Since I live in my own house, I don't pay rent. This will be considered as an advantage for me. Let's say 500€.

My question now is: since I have to pay back the 50k€ by some monthly fee (444 € as an example), can I consider that amount as outstanding debt or not? 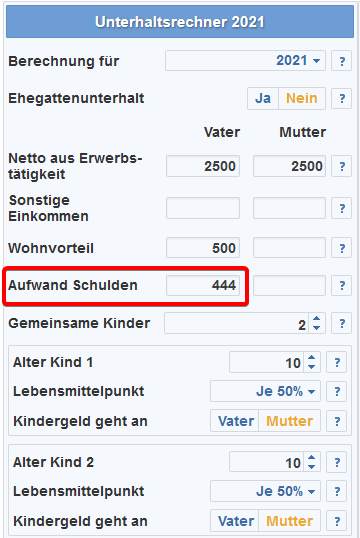 Browse other questions tagged germany divorce or ask your own question.

1
Is there a difference on how the property is divided during the divorce based on gender, in the U.S.?
6
Loan to buy a real estate in Germany
2
How do student loans get split in a divorce?
3
How Can We Refinance A Home Mortgage As Part of A Divorce?
7
How is a Roth 401(k) split during a divorce, and can a spouse's share be liquidated?
3
Withdraw IRA Funds after Divorce
3
Does "community property" apply to day-to-day finances or only during a divorce?
3
Old Barn House: Hidden Costs?
0
How to cancel a credit card you currently have debt on if the bank won't respond?
4
Are distributing ETFs always better than accumulating ones?