I have come across WisdomTree. I am quoting, as they define their line of work:

WisdomTree is an ETF sponsor and index developer that uses a rules-based methodology to select and weight companies...

They are quite active and fast growing as it appears. Some of their funds look rather quite seductive, i.e. lucrative, so that it is more like too good to be true. For example, WisdomTree Cloud Computing UCITS ETF USD Acc (Inception/ Listing Date: 3 September 2019) or WisdomTree Artificial Intelligence UCITS ETF USD Acc (I think it follows Nasdaq CTA Artificial Intelligence & Robotics, but not sure), has had a Y-t-Y return of nearly 90% and 60%, respectively. 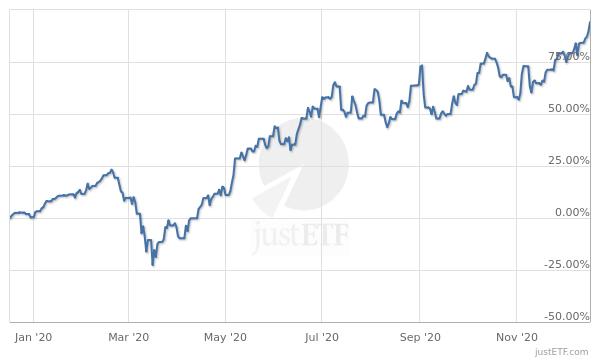 I understand it is highly volatile (could collapse in a month or so). I am also afraid they some of these funds may disappear or reach to a plateau very early, and won't be as lucrative as they seem now. But even dropping to an average yearly growth 10-20% over a 5-Year or 10-Year period would be still pretty good, right? (again sounds too good to be true)

WisdomTree itself isn't Too Good To Be True. The ETFs you mention (Cloud Computing and Artificial Intelligence) are real, and they comprise real companies, but they are "just" highly volatile.

For example, the Cloud Computing ETF tracks the BVP Nasdaq Emerging Cloud Index. Some of those companies (like Adobe and Paypal) are solid, but others are highly speculative, with zero or minimal profit and a P/E ratio in the clouds.

So invest some of your discretionary investment money in them, with the understanding that you might lose a lot.

You are being completely conned.

The way the fund industry works is one of the world's simplest large-scale scams:

An entity launches a few dozen funds. One gets good results for a year or two. They run ads - such as the OP has seen here - for that one. They then make lots of money.

There's no more to it than that.

3 - about 12 times a week on this site (I counted!) someone discovers confirmation bias. Fully explained here: https://money.stackexchange.com/a/127868/41786

(It such a common topic on here there there are now many answers which just mention other answers which mention explanations of confirmation bias! https://money.stackexchange.com/a/133794/41786 )

Not the answer you're looking for? Browse other questions tagged investing etf vanguard or ask your own question.

38
Why do people claim that it's hard to outperform the S&P 500? It has only increased in value by ~1.5x in the past 5 years
1
Investing in index fund vs. investing to large-cap companies directly

18
Can you explain why it's better to invest now rather than waiting for the market to dip?
3
Comparing ETFs following the same index
2
How can Vanguard sell ETFs for no fee?
6
Why buy mutual funds when equivalent ETFs exist?
2
How do Vanguard LifeStrategy 60 Inc units generate a yield when all the sub-funds are Acc units?
1
Liability for poor investment advice?
0
Vanguard S&P500 vs Vanguard U.S. Equity Index Fund
2
Liquidity of ETFs and Authorized Participants