Is the information in Trading View's Technicals referring to the future or the past?

See an example of the 'Technicals' division of a trading pair on Trading View: https://www.tradingview.com/symbols/DOTEUR/technicals/

Are these gauges referring to the past or to the future? 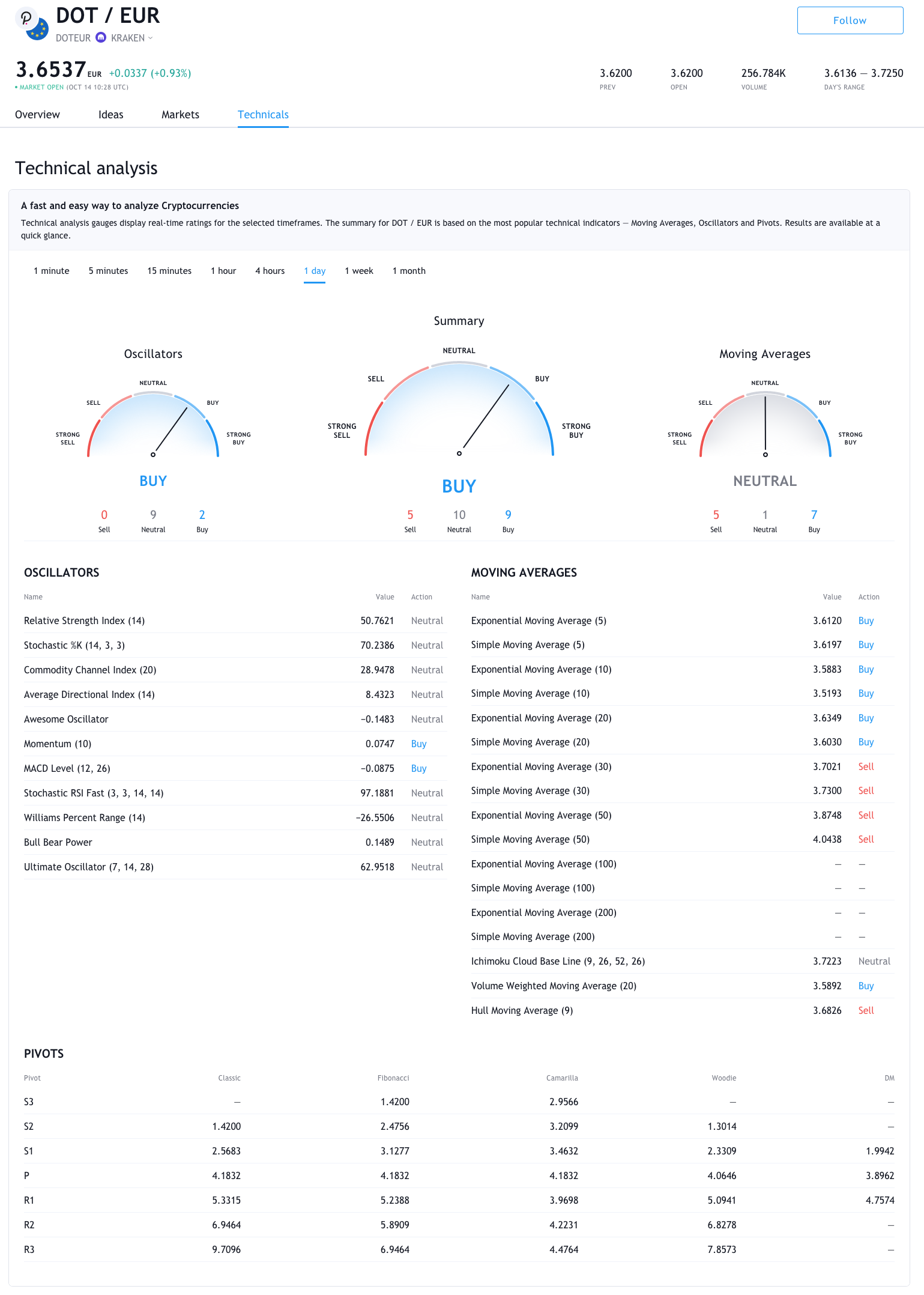 Indicator redundancy ocurrs when you use the same type of indicators, thereby confirming the same information multiple times.

In your indicator list are the Commodity Channel Index, Stochastics, Relative Strength, Williams %R, and MACD. They are all from the same class of indicators and will provide similar results.

The most egregious example in the list is George Lane's Stochastics (14, 3, 3) and (Larry) Williams % R (14). If you look closely at these two indicators, you'll realize that the formula for the Williams %R indicator is exactly the inverse of the Stochastics formula. The only reason that the values in your list are different is because the Stochastics includes a 3 period smoothing coefficient.

Another possible error in the indicator list provided is the MACD value. Just because the MACD is above or below zero does not mean that it is a legitimate signal. Again, if you look into the formulas, you'll find that a MACD below zero that is rising may or may not be a legitimate buy signal whereas as a MACD above zero that is rising must be a legitimate buy signal. In the list, the value is negative so it is listed as a Buy Signal. If only evaluating the negative sign of the value, this may be an invalid Buy Signal.

The point of my explanation is that you can't throw a bunch of indicators together, some redundant, and then conclude that because more than one are concurrent, it's a trading system. If you're going to attempt this, you need to know a lot more than this simplistic approach.

To directly answer your question,

Are these gauges referring to the past or to the future?

The gauges are literally that website's guesses about the future.

Note that the actual "data" below the gauges (example, "stochastic CM.2, 72.4") is of course obviously based on things that have happened, ie obviously in the past.

But the literal gauges are that website's guess at the future.

Just one footnote. With the crytpocurrency fad, you get a lot of folks who have never said the word "market" before for any reason, who suddenly humorously start uttering sentences, books, websites, newsletters, etc. giving "trading advice" on cryptocurrencies. Take care to discount such info.

Consider the "Oscillators" gauge. Two indicators ("Momentum" and "MACD Level") are giving a bullish signal, while the rest are giving a neutral signal. Overall, the signal is slightly bullish, so the gauge says "BUY".

Should you trust these signals? Whether or not these technical analysis indicators can tell the future is a matter for yourself to decide. You should backtest. Some people believe that technical analysis is like driving a car while looking through a rear-view mirror.

Not the answer you're looking for? Browse other questions tagged trading technical-analysis or ask your own question.

7
Is candlestick charting an effective trading tool in timing the markets?
2
How might trading volume affect future share price?
1
Resources to begin trading from home?
2
What is the 'period' defined as for trading indicators?
1
Bollinger bands - 20 days or 20 candles?
63
Is it true that, "just ten trading days represent 63 per cent of the returns of the past 50 years"?
4
DaVinci Pro forex trading bot - where is the scam?
0
How to calculate average in intraday trading of NSE/NIFTY equity shares?
0
How to calculate actual dollar values from the fibonacci extension on Trading View