When leaving job, is there a time limit to rollover a 401k into a Roth IRA?

My wife is leaving her job in the next month and going to a new one. She currently has a 401k that we would like to rollover into a Roth IRA ASAP.

However we might be moving in a few months and would like to wait until then to look for a local financial advisor and to start the Roth IRA then.

Is there any time limit to rollover or can we just wait until then to roll it over?

The only exception would be if you have less than $5000 vested in the 401k they can force you to take a distribution from the plan. From experience, not all plans enforce this provision, but they are not forced to keep your 401k open unless you have at least $5000.

Update: I found out some additional information recently that I wasn't aware of. Apparently you once the money is in a Rollover IRA, it can be converted into a Roth IRA at any later point without incurring a distribution penalty (of course, you still have to pay that taxes at the point of conversion). There is no time limit for the conversion either.

I would do a direct transfer to an IRA first. Then look carefully at where you will end the year, i.e. your 'taxable income' line. The worst thing on can do is to not quite understand the difference between gross income and taxable. 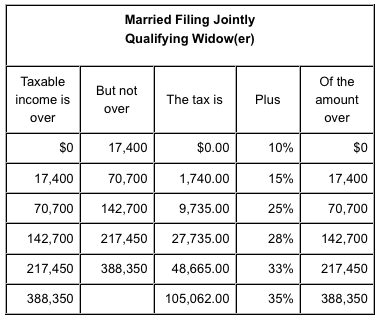 The chart above is from Fairmark, I am not affiliated with them, but recommend.

Not the answer you're looking for? Browse other questions tagged united-states 401k roth-ira rollover job-change or ask your own question.

13
Do Roth IRA contribution limits apply to Rollover IRAs?
3
Will I face complications when rolling my Roth 401K into a Roth IRA when I become a grad student?
4
What is the penalty for contributing to a Roth 401k when my AGI is over the limit?
4
Rollover 401k into Roth IRA?
4
Just left my job. Should I roll my 401k to a Roth IRA?
2
Can you roll a traditional IRA into a 401k and do a Backdoor Roth IRA same year?
0
Converting Portion of 401K Rollover Traditional IRA to Roth IRA
4
Is it possible to to rollover 401K into an IRA account multiple times with different employers?