I created an account with TDAmeritrade and started investing in VFIAX(Vanguard 500 Index Fund Admiral Shares) three years ago. At the time, I thought that I am investing in an index fund. However I was looking at Vanguard's website - https://investor.vanguard.com/mutual-funds/profile/overview/vfiax and it says that the minimum investment is 3000 and is available for a price of a share as an ETF.

Does this mean that the fund that I invested in tdameritrade is not an index fund but an ETF?

This is its description 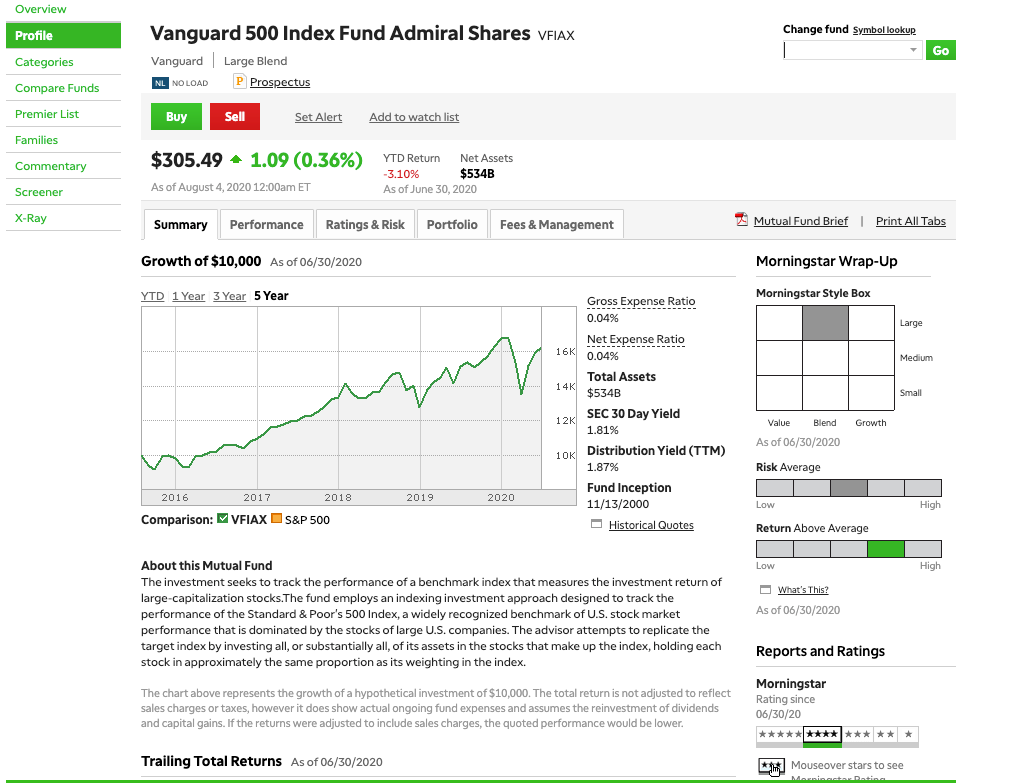 How is it different from the VFIAX fund directly available at Vanguard?

Would it be a good idea for me to buy directly from Vanguard with an investment of 3000?

Do I have to sell and buy the stocks with interest every year for it to be compounded?

My goal is grow through this fund to a million dollars in 20 years. If I keep investing 2000 per month in this fund, will I be able to reach that goal?

Does this mean that the fund that I invested in tdameritrade is not an index fund but an ETF?... I did purchase VFIAX with less than 3000 three or four years ago

You own VFIAX, which is the mutual fund. VOO is the ETF version of the same thing. Apparently TD Ameritrade does not require you to meet the $3,000 minimum initial investment.

A lot of Vanguard's offerings can be bought as either a mutual fund or Exchange Traded Fund (ETF). These work slightly differently from each other, but they track the same underlying assets. In this case, both track the S&P 500.

Ignoring fees, the returns of both of these would essentially be the same over time, so it doesn't matter which one you own. Now, the expense ratios are different (VFIAX is 0.04% vs VOO 0.03%), and TD Ameritrade might levy extra transaction fees to buy them.

If TD Ameritrade doesn't have any transaction or other fees, it doesn't really matter which one you own (other than the fund's expense ratio). The only difference is that VFIAX can be bought in any amount (after at least $3,000 invested), but VOO requires purchase in whole-number shares.

How is it different from the VFIAX fund directly available at Vanguard?

You won't have transaction fees if you buy direct from a Vanguard account. TD Ameritrade may levy extra fees. You will also have to have at least $3,000 to buy VFIAX at Vanguard. But, you could buy the ETF version VOO for the minimum price of one share (currently about $300).

Would it be a good idea for me to buy directly from Vanguard with an investment of 3000?

Only if TD Ameritrade has extra fees as opposed to Vanguard.

The return of the fund (or ETF) is the same regardless of where you buy it from. The only difference would be the fees levied by the brokerage (such as extra transaction fees)

Do I have to sell and buy the stocks with interest every year for it to be compounded?

No, that isn't necessary.

My goal is grow through this fund to a million dollars in 20 years. If I keep investing 2000 per month in this fund, will I be able to reach that goal?

@Nosjack has already answered your questions about whether investing through TDAmeritrade is better than investing through Vanguard directly, and so I won't address that issue, but instead concentrate on some matters that you seem to misunderstand about mutual funds and their performance.

Mutual funds don't pay interest; they make distributions which are typically further classified as dividends and capital gains. Index funds like VFIAX rarely make capital gains distributions, only dividends distributions as a general rule. You don't need to buy and sell shares of a mutual fund in order to receive distributions; they are paid to all the shareholders as of the ex-dividend date; if you have elected to receive the distributions as cash, you will receive the cash in your TDAmeritrade account (where you hold the VFIAX shares) usually three to four days after the ex-dividend date whereas if you had bought the VFIAX shares directly from Vanguard, the money will show up in whatever bank account you specified to Vanguard (or as a paper check about a week later). If you had opted to have the distributions re-invested in VFIAX (lots of people choose this option), the number of shares that you hold in VFIAX will increase appropriately. In either case, unless you hold VFIAX in an IRA or tax-sheltered account, the distribution is taxable income to you regardless of whether you opted for cash payout or re-investment of the distributions.

The yield of the mutual fund includes the distributions and the increase in price (if any) of the mutual fund shares. The graph that you include in the screenshot shows the growth in value of a $10K investment; it is not what you get paid out in terms of dividends and capital gains. That number is a "measly" 1.87%. Furthermore, the fine print below that graph tells you that it is assumed that dividends and capital gains are re-invested (not taken as cash) and also that the graph does not include any fees or commissions that your broker may have charged to sell you the VFIAX investment.

Not the answer you're looking for? Browse other questions tagged etf index-fund compound-interest vanguard or ask your own question.

4
What is the difference between shares and ETF?
9
Are there fees or penalties for holding less than $10K in a Vanguard Admiral Shares fund?
2
Same fund in ETF and investor share, different expense ratio?
7
What is cheaper annually -- buying shares in a Vanguard index fund or buying shares of an ETF?
7
Why does Voya use Vanguard fund names with different prices and no ticker symbols?
1
Balanced index fund that tracks S&P 500
0
Meaning of "excluding components of the S&P 500" in description of Fidelity Extended Market Index Fund