Consider the Level 2 quotes for Microsoft (NASDAQ: MSFT). Microsoft is only listed on NASDAQ, but it also trades on the NYSE and other stock exchanges: 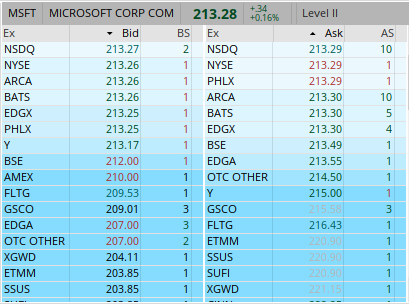 Your question is more general than you think. The short answer is that yes, you can trade stocks on almost any US venue and the stock companies need only adhere to their listing exchange's mandates.

However, your questions hint at massive changes over the past two decades that completely remade how stocks are traded. These issues can be seen in US stock markets as well as many other developed equity markets. So... I'll give more background to explain those answers and how they came to be.

First, yes: there is a difference between the listing market which mandates financial reporting and often requires a minimum stock price and certain governance standards be met. The listing market charges fees for listing a stock, however that exchange is then responsible for opening and closing trading on that stock every day. That sets the final price (which may affect financial contracts).

However, stocks can be traded on a number of venues. In the 1960s, Jefferies arose to allow trading of NYSE and AMEX stocks without having to pay fixed commissions to a specialist. As more market makers offered trading of NYSE stocks off of the NYSE floor, this became known as the Third Market.

Some institutional investors also believed they could do better by trading on a venue other than NASDAQ (which was then not an exchange but a collective of market makers). In 1973 they created Instinet to allow institutions to trade with one another. From 1984 to 1988, the regional exchanges began using unlisted trading privileges (UTP) to trade NYSE and AMEX stocks (Khan and Baker, 1993).

UTP was eventually expanded to allow the NYSE and AMEX to trade NASDAQ stocks. However, volumes for UTP trading remained small until around 2000.

The above changes created three major types of venues:

In the early 2000s, the decline of internet companies led to a lot of available programming talent. New high-performance ECNs flourished: They added up-to-date online views of their order book (something exchanges would not offer for years) and focused on quick execution of orders. Market makers also became more automated. The net result is that MMs and ECNs stole significant market share from the NYSE and NASDAQ.

A number of SEC rules were passed at this time which encouraged competition among venues. This included pushing venues to publish trades and quotes, making venues report execution quality in a standardized format, and redistributing fees according to market quality.

Over 2000-2002, NASDAQ split with NASD becoming the self-regulator FINRA and the automated quotation piece become an actual exchange (Nasdaq). Nasdaq would eventually buy Instinet and Island (another ECN) to improve their technology.

Also over this period, the regional exchanges lost almost all of their market share. Now, the regional exchanges are often used by market makers to cross orders or for listing less liquid stocks. PHLX and the AMEX moved to mostly trading options and ETFs; the Pacific Exchange became where ARCA (and ECN the NYSE bought) traded. Other ECNs arose, like BATS and Direct Edge which are now merged (yet still operate BYX, BZX, EDGA, and EDGX).

The loss of market share does hurt, however. Nasdaq has made numerous attempts to hold on to market share like reshowing orders before sending them to the competition (flash orders) or (recently) trying to roll back UTP trading for smaller Nasdaq-listed stocks.

You ask another interesting question: do companies need to adhere to listing requirements of all the exchanges where their stock is traded? The answer to that is no: the listing exchange is the only exchange they must satisfy. However, if a firm displeases their listing exchange and gets delisted, many other venues and exchanges will also no longer trade that stock.

Why do companies not list on the (cheaper) Nasdaq? For a long time, it was because of prestige and because having a specialist on the NYSE ensured somebody would quote a stock after its IPO. Furthermore, the NYSE opened and closed stocks with an auction -- which was much more reliable than just using whatever happened to be the first and last trade. However, Nasdaq has long since attracted enough liquidity and they even have an automated opening and closing auction. I suspect lingering prestige (NYSE's listing requirements are more stringent) explains why some companies stay listed on the NYSE.

The benefits of these changes was so large that many other countries encouraged competition from MMs and ECNs. Europe passed the Markets in Financial Instruments Directive (MiFID) which largely allowed many of these same changes to occur in European markets. (ECNs, however, were referred to as multilateral trading facilities, MTFs.)

MTFs like Turquoise and Chi-X Europe arose, stole market share from traditional (listing) exchanges, and also lowered trading costs. Chi-X Europe (now CBOE Europe) has even changed to be a registered market -- so European firms can now list their shares there.

Venue competition has also spread to European bond markets, US options markets, and will likely spread even further.

US stocks don't automatically list on different US exchanges.

Exchanges such as NASDAQ and NYSE are independent and have different (though in many places overlapping) listing requirements including both quantitative initial listing standards (e.g., different earnings tests) as well as corporate governance standards (e.g., whether or not an internal audit function is required). Both U.S. and non-U.S. companies may list on one or more such exchanges. Exchanges may operate in different ways, for example one may use market makers while another may follow an auction model. Each exchange charges their own fees as well.

An individual trade of a listed stock may execute on-exchange or off-exchange.

A brief explanation of UTP can be found on NASDAQ's website (ABCs of U.S. Stock Market Acronyms):

In 1994, we saw the introduction of the Unlisted Trading Privileges Act, or UTP. This allowed stocks to trade on any venue, regardless of their primary listing exchange.

Because of this, while AAPL lists on Nasdaq, it can trade anywhere in the liquidity pie. This has, over time, given rise to exchanges that exist just for trading, separating the listings business from the broader exchange platform.

Chart 2: Stocks can trade anywhere, regardless of where their primary listing is

Read Slicing the Liquidity Pie for an overview of on-exchange and off-exchange trades.

Answers to the questions:

Does this mean that companies only need to be listed on one stock exchange in order for their stock to trade on other stock exchanges?

As explained above, in the US, stocks can trade on any stock exchange, regardless of where their primary listing is. It is possible for a stock to trade on a stock exchange without listing on it, but it is not automatic; there is a process.

If so, do companies need to adhere to the "listing requirements" of all the stock exchanges where their stock is traded, even though they are not "listed" on those stock exchanges?

No, the company only needs to follow the listing requirements of its listing venue.

I'm not sure about this, but I will try to answer.

Among other things, the primary listing venue relevant for:

Not the answer you're looking for? Browse other questions tagged united-states stock-markets stock-exchanges nasdaq nyse or ask your own question.

1
What is the difference between a stock being "listed" on an exchange and trading on an exchange
1
How does a stock trade at an exchange that isn’t where it is listed?
6
What exactly is BATS Chi-X Europe?
2
How are so many stocks tradable via Frankfurt that are not listed there?
2
Options trading venues in the US
0
What do MX, NE, DA, F, etc. mean in the stock market?
0
What is UTP (Unlisted trading privileges)
1
Stock Exchange in US

2
Trading on exchanges or via brokerage companies?
6
Where can I download all stock symbols of all companies "currently listed" and "delisted" as of today?
1
Stock Exchange in US
2
NYSE vs. Nasdaq - can I tell what exchange a ticker traded on, based solely on the ticker?
1
How do the different branches of the NYSE interrelate?
2
If I am a Canadian Citizen, how can I surpass/mitigate the losses while trading US Stocks due to exchange rate?
2
can I trade stocks in IEX with Interactive brokers?