Should I invest or should I wait while having foreign currency?

I'm european living in Malaysia and receiving my salary in MYR. I already have a huge savings account worth of a full year of expenses in local currency at 1.5% APR, additionally, I have about the same amount already invested in VWRL.AS. Money invested in the stock market will only be cash out in about 5 to 10 years from now to buy a home, iff necessary.

Normally, I need to exchange my currency from MYR to EUR using Transferwise or with a fellow friend before investing.

I plan to continue investing all remaining amount from savings account to VWRL.AS until I have about 3 months worth of expenses, as I don't find the need for more.

Recently, due to COVID-19 pandemic, MYR / EUR exchange rate has taken a hit to my baseline with sample data, is as follow: 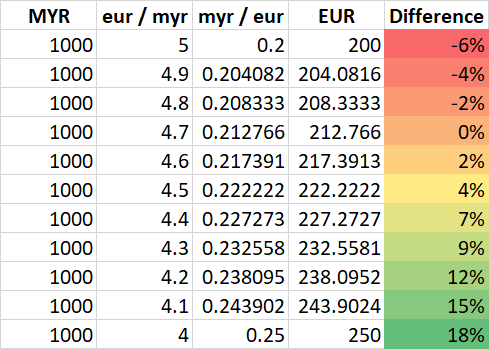 I'm planning of leaving Malaysia some months from now. So my question is simple, should I continue investing in stock market as normal or should I wait until MYR / EUR exchange rate gets better?

Fundamentally here you're asking for a sound prediction on direction of currency markets (and in a secondary respect the direction of the stock market). No one credible who even vaguely knows this will tell you, so you're not going to get an accurate answer to the specific question from anyone who isn't an idiot or a fraud.

Outside of this point, you clearly have some potential risk here you might want to hedge, and with these types of problems you always basically get to the same dilemma: pay an extra premium to hedge via stuff like currency hedged funds or futures with their slightly higher fees, or just take on the risk yourself for free. You can't have both.

As a result, most of this question comes down to just how much you care if currency continues to swing against you (and of course it can easily swing heavily back in your favour). If you care a lot and are happy to pay a premium to reduce your risk there are a variety of options open to you depending on your exact aims, if not you should just proceed as normal.

The EUR currency is a red herring. You happen to use it as a medium to buy the stock fund, but your return will be just as if you were able to buy the same fund in MYR on a local exchange. So the real question is whether the fund (stock index) priced in MYR will return more or less than the 1.5% interest rate. As a general rule, stocks return more than cash in the long term as compensation for their risk, and you have a long-term horizon, so continuing to buy the stock fund is logical.

This is yet another sunk cost/anchoring/status quo question. You have a choice between investing your money in the stock market or investing it in MYR. You seem to be letting the fact that you're currently invested in MYR to bias your thinking. If you were in Europe, had no involvement in MYR, and hadn't had this exchange rate loss, would you be looking at random foreign countries, finding ones whose currency recently lost value, and buying those currencies and then "waiting for the exchange rate to get better"? Granted, there's some transaction costs, but presumably you would be having those eventually (although if there are unexpected expenses, that could cause additional transaction costs if you have to move money back to MYR).That you lost value in the change in exchange rate is immaterial.

It sounds like you're asking an XY problem. You want to buy stock with a different currency than you have, and then think that after you get your money exchanged you'll have more money to invest? Maybe I just haven't read the question correctly, but what you are asking is that you want to exchange one form of finances for another so that you can immediately exchange it for yet another.

Where math is concerned, this makes no sense. If you can buy 10 stocks of Company A with your current currency and also 10 stocks of Company A after you convert your currency, then you are adding an unnecessary step. By buying stock in a company, you've gotten your money out of your local currency, so why bother with the currency exchange? Selling the stock goes the same way, unless you are going to permanently stay in a different country and need that currency, then currency exchanges don't make sense.

Well, there's the Radar "principle", which also works for a variety of other military quartermasters. This "principle" comes from trading something simple and turning it into something much larger, like a case of pop traded for some ammo, which is in turn traded for a truck, which is then traded up over and over again until you get the medical supplies you need and a case of pop. This is not the case of currency exchange and is the hope of everyone who gets into the stock market.

The way the trading happens with Radar is that he knows exactly who has what and who needs what, so he can use what he has to give to someone else willing to trade something they don't need, then stringing this together to eventually get what Radar needs. This is really tough to do in the best of times and why Radar, and real quartermasters, are the only people able to manage it. And they don't always manage to do it either.

Stock brokers try to convince you they can also do this, yet the needs of the market change on a second by second basis, so it's nearly impossible to do it even when they have computers do it for them. The computers can't predict the changes any better than the brokers, they can simply react faster to changes, except they also can't predict if the change was temporary or permanent.

If exchanging your currency would be a "fool proof" way to prevent yourself from losing money, literally everyone would be doing this. Your whole country would abandon your currency, including the government, and you'd be using someone else's currency instead. It's not fool proof and it doesn't work. Also, since you are just going to trade it away for stock anyway, it really doesn't make sense.

Assuming that you must eventually convert this money to EUR, follow the Law of Large Numbers. Pick a time period you can live with, and do multiple transfers over that period. Each transfer should be the of same amount, and with the same number of days between transfers.

If today's exchange rate is unlucky, and it goes up later, you won't miss out completely on the better exchange rate. OTOH, if today's exchange rate is much better than what the future holds, then at least you got some of your money out at a better rate. In other words, you're hedging against the fact that your predictions could be wrong, and you're ensuring that your percent of loss/gain are (on average) the same as anyone else doing a MYR -> EUR conversion at any time during the time period in question.

To compensate for any fixed fees involved, you'll want to use large enough chunks of money so that the fee as a percentage of the amount being transferred at once is minimized; Perhaps you'll want to maintain a EUR savings account so that you can transfer the money from EUR to stocks in different sized chunks, and at a different frequency.

How I found the answer

Let's reframe the question until it's answerable.

Let's assume that the exchange rate you desire does win out in the end, but it takes 12 months. You also have to consider the opportunity cost of having not invested in the stocks you desire during those 12 months.

So, another question you should ask is, "Will the European stocks recover faster than the exchange rate?" As long as they recover at the same rate, it doesn't matter when you invest; the outcome is the same. Again, that's assuming that the exchange rate does "recover" to your personal expectations.

Or, what if the exchange rate doesn't recover, and the stocks decline as well? Then the question becomes, "Which one will decline more slowly?"

Let's consider another scenario. Imagine a man named Bob, who gets paid in EUR but whose living expenses are paid in MYR. He keeps a savings account in EUR, and each month, Bob transfers a certain amount, smaller than his income, from his savings into MYR for his expenses.

Bob is essentially betting that the European economy will outperform the Malaysian economy in the future; or that its risk of volatility is lower. If he believed the reverse, he would transfer all of his income to MYR, and maintain a MYR savings account.

That is the scenario without stocks involved.1 You need a certain amount of currency in MYR to support your daily life; but everything else should be stored in the currency you expect to do better. According to the trend of the exchange rate to this current moment, you would have been better off to maintain the bulk of your savings in EUR, even if you didn't invest it. That doesn't tell you where the trend is headed, though. In a month or year, the exchange rate might tell the opposite story.

1 The primary difference between you and Bob is that the inconvenience of transferring currency happens at a different times. Bob is forced to make this decision with every paycheck; you are forced to make it every time you re-balance your savings and stock holdings.

The frequency of transactions also changes up the risks over time: Bob's personal outcome will more closely match the overall state of affairs than yours. You could get very lucky (or unlucky). Bob cannot get very lucky or unlucky, because he made small currency transfers at consistent times.

So, if you plan to convert to EUR anyway, perhaps you should divide the transactions across the amount of time you are okay with waiting, so that you don't get caught off guard

8
Strategies for saving and investing in multiple foreign currencies
2
If I invest in securities denominated in a foreign currency, should I hedge my currency risk?
1
cross-currency accounting
40
Is there a reason why someone shouldn't buy into a temporarily cheap currency of an otherwise solid economy?
2
Is a US expat with savings in multiple currencies considered to be investing in the non-USD currency?
2
Moving to Europe, savings in the US, alien both in Europe and the US, trying to maximize exchange rates
2
Can I use FOREX markets to exchange cash?