I wonder if someone/anyone can help me out with an issue that's been increasing in recent months.

I've been using CouponCabin for almost 2 years (it's another Ebates/Rakuten) without any payments issues, and I'm in their top 1% of users. I earn cashback, it's directly paid into my account on the correct date, easy. Then I log in today and I immediately get a warning in red about "unnatural activity" (images below).

Our security system has detected what it considers unnatural activity originating from your account and/or computer network. Per the CouponCabin Terms & Conditions, your account is temporarily eligible for check payments only

So they say they can't tell me what the specific issue is, they want me to give them my mailing address so they can send me physical checks at the same rate as my usual cashbacks (which is more frequent; I sometimes might get 2 payments in a week, rather than once every 3 months, depending on purchasing volume), and they tell me that my account is in good standing, but they can't say if/when my temporary cheque status will end. I mean sending physical checks via a slow postal service during a pandemic? Why? My question is what level of risk could I be facing, and do I provide them with an address to accept checks? Is it shady that a company can just decide to do this, but not provide any meaningful information as to why?

TL:DR I've been reading a variety of reports from places like the Better Business Bureau (BBB and this has happened to other users. Apparently there are people whom have provided CC with their drivers license and utility bill (sometimes with personal info like purchases redacted), and CC has not accepted these documents and continue to point to their T&Cs. I'm based in CA, and I neither have a local license, or my name on any utility bills anyway. But you know I still pay rent at my home and file my taxes correctly lol.

Thanks in advance if anyone can provide some insight. Appreciate it! :) 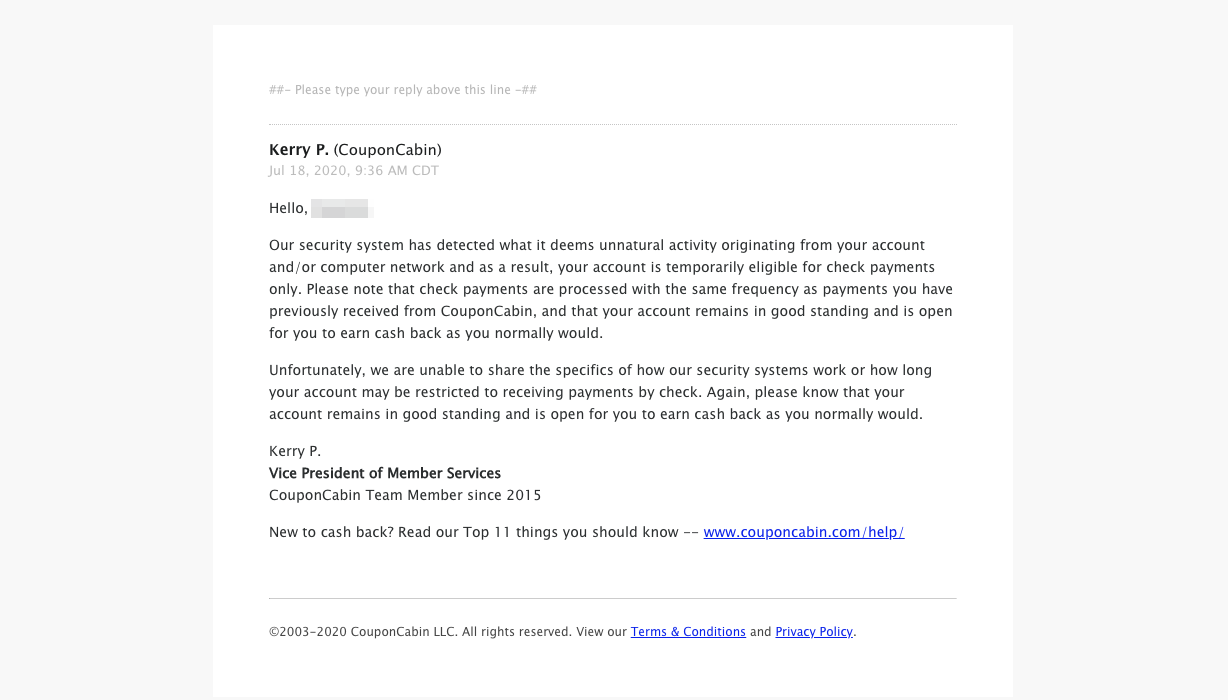 Your mailing address is public information anyway, so if that's all they want and that's all you give, I don't think you're putting yourself at any undue risk of scams. Especially considering you already have an established (and hitherto profitable) relationship with the company.

Whether you want to do it or not, especially in our current global situation where even leaving the house regularly to check for mail could be considered "risky," is a personal choice for you to make.

The fact that they're telling you that your account status has been flagged but refusing to tell you why is a little odd, but not unheard of. Perhaps discussing the issue would involve revealing information about third parties involved in the "suspicious behaviour" which they would rather not discuss, for example. I'm sure it's frustrating, though. If it's frustrating enough to be a dealbreaker, perhaps you should consider whether you even want to keep doing business with this company, before you make your decision on sending them your mailing address.

Might be worth asking, if they won't tell you what went wrong so you can fix it, perhaps ask them if there's a timeline for when your account might be reinstated for direct deposit. Based on that answer, you can better formulate how willing you are to put up with this "mailing you cheques" business.

I don't know if you are still looking for an answer to this question, but I received the very same message two years ago. The "unnatural activity" issue seems to come up a lot, and CouponCabin's refusal to explain it is par for the course. According to one website that I've visited, this "unnatural activity" could be the result of something completely harmless such as clicking around too much. Of course, they won't say that to you.

When I asked them about this issue and couldn't get an explanation, they did say that this possibility is listed in their terms and conditions, which is true. I eventually said that I would accept the paper checks, but then I also said that I'd have to look into whether there was a legal concern regarding their lack of transparency. They terminated my account for that. They said they'd pay out what I had pending in my account, but they never did. At the time, I was quite irritated and posted reviews of my experience and filed complaints with consumer protection agencies. I even sent them a formal demand letter. None of this got me my money.

If I had to do this all over again and was simply at the receiving checks portion in my saga, I would have accepted the checks immediately, stopped using them, waited patiently for my final payout, and then if it arrived, that would be it. Maybe at that point I would have written a review. Who knows. If the check didn't arrive, I would have then contacted them but have been super nice and polite and would not have said anything that would even imply a threat of legal action. If they then processed the check, great. If not, I would stop contacting them, and I would sent a formal demand letter to their legal department. I would lay out the facts and provide any relevant evidence. Again, I would not even imply a threat of legal action. If the check got sent, great. If not, I would either file complaints with consumer protection agencies - the Attorney General's offices in Illinois and Indiana and the BBB. They would likely respond. If they sent the check, great. If not, or if I skipped this step, the only other action available is suing in Small Claims Court.

Now, let me specify that I am not a lawyer, and I'm not giving any legal advice. All I can say is that if you were to sue CC in SCC, you would likely have to do so in Lake County, IN, per CC's terms and conditions (you should get yourself really familiar with those terms). You could try to sue in your local court, but CC would say that you had agreed to their terms when you used their service, and the dispute resolution sections specifically states that any SCC cases must be filed in Lake County, IN. Most likely, the judge would side with CC here. So, if you wanted to sue in SCC, you'd have to travel to Lake County, IN to do so, unless they are still doing remote hearings. The current cost to file is $97. However, if you win, that money gets added to the amount that CC would owe you. Also if you win, you are responsible for collecting this debt. That's the step I am on right now.

Based on my experiences, I think CC is a risky site to use. It almost feels like gambling because they have these special member offers, which can allow you to get deals like $100 back on a $100 purchase. But, you run the risk of having an issue that could result in them terminating your account and keeping your money, whether they are entitled to keep it or not.

This is months later, so I assume you decided to either give them your address or not, but I would not have an issue giving them my address. They never asked me for an unredacted version of my DL or any other document, but depending on the document, I would probably not send it to them. That strikes me as too big of an ask. A government agency? Sure. A bank where I'm trying to get a loan to buy a house, sure. A coupon site? No way.

Good luck, and I hope your experience has been smoother than mine.

Not the answer you're looking for? Browse other questions tagged scams check security or ask your own question.

2
Security freeze on my TransUnion credit report
6
Using credit cards online: is it safe?
13
How do cashier's checks work and why are they good for scams?
42
A guy scammed me, but he gave me a bank account number & routing number. Can I use that to take out what he owes me?
14
What type of profits or scam could do cash-back services?
85
I am an EU resident being contacted about stock I own in a defunct company by a supposedly US based lawyer, is this a scam?
25
Scam? Phone call from “Department of Social Security” asking me to call back
2
Job Posting: Is this a scam?