Why do most of the stock market's gains occur overnight? It has an overall loss during the daytime

I saw a tweet from the Chief Investment Strategist of Charles Schwab that said the following:

Buying SPY at open & selling at close every day (ie, only holding it during trading day): -13.9% return

It included the following graphic: 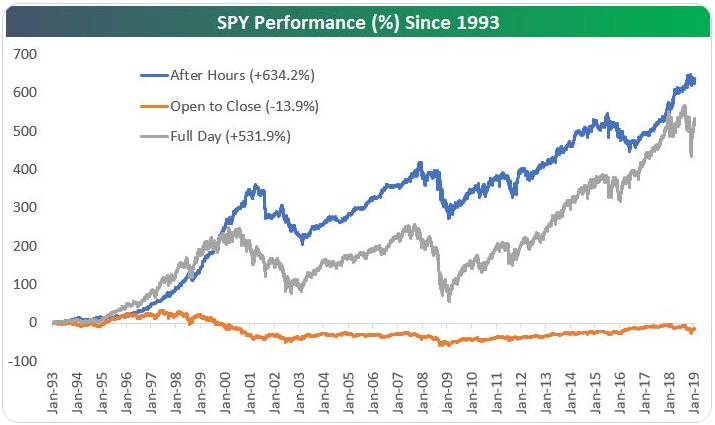 A couple of possible reasons:

I once read a suggestion that a countervailing mechanism explains the suppression of this tendency in parts of the 1990s (i.e., somewhat weaker overnight and stronger intraday returns): As Japan endured an extended bubble-deflating bear market, US morning futures and opening markets were often depressed in sympathy with the overnight Nikkei but then rebounded during the trading hours of bullish US investors.

Per the request above:

The market reacts to overnight news which includes after hours earnings announcements, economic reports, overseas trading, etc. (very, very few companies announce earnings during regular hours trading). Because of these, the market tends to gap up or down in the morning. In a long term bull market, those gaps are net positive

The following items could play a factor:

Not the answer you're looking for? Browse other questions tagged stock-markets standard-and-poors-500 or ask your own question.

17
How is limit order handled right at market opening?
8
Why are some long term investors so concerned about their entry price?

42
Why do stock prices of retailers not surge during the holidays?
18
Why is AT&T's stock price declining, during the days that they announced the acquisition of Time Warner inc.?
3
How to invest in the stock market during a recession?
2
Is it a bad idea to have a stop loss on a stock overnight?
4
If most actively managed funds don't beat the index why not choose the opposites?
4
Chinese Stock Market crash much less severe during Covid-19/SARS-CoV-2 crisis - Why?
24
Why do people invest in the stock market when it is forecast that a drop should occur?
0
Why has SoftBank increased less on the Frankfurt Stock Exchange than on the OTC market?
2
Should I buy or sell stocks during the opening and closing auctions only?