During the 2008 - 2009 stock market "crash", the bottom came in early March, not in the heavy liquidity and other banking crises in the fall. Do you remember what the history of this is, what happened in early March? I.e. note there was rise at the end of 2008, and then came the second, deeper drop, months later, but I don't remember any of the details. 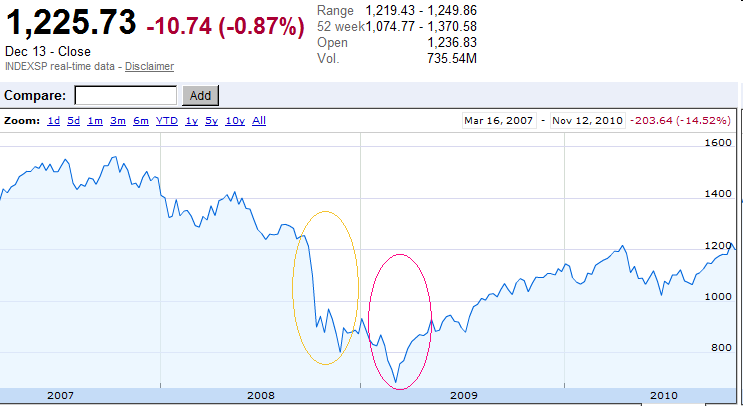 The second drop was part of the same event. The short-term resurgence is often called a "dead cat bounce".

Mongus Pong's answer is a great answer, I'm going to approach from a more anecdotal POV.

Think about the fear that was in the air in Fall 2008. From my recollection, that short-term stabilization came from the Fed, President, Congress, etc standing up and saying that the government would do everything in its power to maintain liquidity in the marketplace. So the fear of a broader collapse of investment banks (beyond Lehman Brothers, Merrill Lynch, etc) due to the Fed behaving as it did in 1929 was abated.

By the time you got to Q1 of 2009, it became clear that business vaporized -- nothing was happening. No cars were selling, Christmas was dismal, vacations were cancelled. (example: I went on vacation to a fancy resort in December 2008 and paid $60/night for a $450/night room! The place was half empty.)

The news channels will often try to attribute a specific reason to the price move, but that is largely just guess work to fill up the news pages so people have something to read.

You may find it interesting to read up on the Elliot wave principle. The crash of 2008 was a perfect Elliot Wave fit. Elliot Wave theory states that social moods (which ultimately drive the stock market) generally occur in a relatively predictable pattern.

Only when the last person has given up hope can the markets start to go up again..

First, I would like to use a better chart. In my opinion, a close of day line chart obscures a lot of important information. Here is a daily OHLC log chart:

The Mar 10 uptrend started with various news articles (such as this one) which I recall at the time suggested things like reinstating the parts of the Glass–Steagall Act of 1933 which had been repealed by the Gramm–Leach–Bliley Act. Although these attempts appear to have been unsuccessful, the widespread telegraphing of such attempts in the media seemed to have reversed a common notion which I saw widespread on forums and other places that, "we are going to be in this mess forever, the market has nowhere to go but down, and therefore shorting the market is a good idea now." I don't find the article itself, but one prominent theme was the "up-tick" rule on short selling:

The SEC eliminated the rule on July 6, 2007, but in March of 2009, following a conversation with SEC Chair Mary Schapiro, Rep. Barney Frank of the House Financial Services Committee said that the rule could be restored.

From this viewpoint, then, that the last dip was driven not so much by a recognition that the economy was really in the toilet (as this really was discounted in the first drop and at least by late November had already been figured into the price). Instead, it was sort of the opposite of a market top, where now you started seeing individual investors jump on the band-wagon and decide that now was the time for a foray into selling (short). The fact that the up-tick rule was likely to be re-instated had a noticeable effect on halting the final slide.

Stock prices can drop for many reasons. It can be caused by poor earnings reports, poor earnings projections, national political news, geopolitical news, terrorism, change in Fed policy, proposed or actual legislative news, inflation fears, rumors, ad nauseum. Even in hindsight, it's impossible to determine the specific cause unless there's a singular momentous event like the destruction of the World Trade Towers on 9/11.

Not the answer you're looking for? Browse other questions tagged stock-markets or ask your own question.