What would be the effect of closing stock market trading for two months to Coronavirus?

We all hear about the massive fluctuations of the stock market due to fears and responses to the coronavirus pandemic. The market also has also triggered "circuit breakers" that temporarily halt trading to prevent massive swings.

What could potentially happen if they just halted all trading for the next two months as a medium-term circuit breaker? Assume they did it at night without warning so that people couldn't get trades in before the closure. Would the rest of the economy continue to function otherwise (other coronavirus effects not withstanding)? During the closure, I would imagine that stock prices would just stay the same and then companies would adapt to their changing supply and demand situation as needed, right?

Once it opened again there might be a swing once we know which companies have survived the pandemic and which won't but that speculation is happening on a daily basis now, why not just close it to prevent chaos and allow companies to think longer term without worrying about momentary market valuation?

This idea of an extended "market holiday" is a completely normal idea. A lot of people have had this idea, especially today, and I'll tell you below why it's terrible. Just flat-out bad. I once had this idea during the GFC when I was also new-ish to the market, so don't feel bad.

I believe one of the CNBC hosts was touting this idea this morning. A simple way to refute one of the underlying notions here is thus: If you don't like what you see then just go ahead and close your eyes, and the bad thing will go away right? Of course not.

You might say "Maybe the market just doesn't know what stocks are worth right now and that's why the market is down." I'd answer that no one ever really knows exactly what a business/stock is worth (some exceptions aside). Generally, people who sell think it's worth less than the price and people who buy think it's worth more, so why do we need to shut the market?

You might say "Maybe not everyone feels comfortable trading or feels like they know what this specific business/stock is worth right now so that's why we should halt trading." I'd answer with why can't the people that do want to trade continue trading and if you don't know/ just aren't "comfortable" then step aside, no one is forced to trade (unless maybe they used leverage/need the money).

The punchline on extended market holidays, reiterated: Except in cases of traders or technology used to trade actually being unavailable/overtaxed for some reason, it's something we should avoid at all costs. There are lots of negatives, and I'm not aware of any positives outside of the corner cases mentioned above.

A surprise trading halt as you mentioned of an extended variety is one of the worst things that can be done to a market. Imagine...

RWP's answer outlined what would theoretically happen when the stock market suspended. Here I give an actual example of what actually happened when a stock market was suspended for a few days. 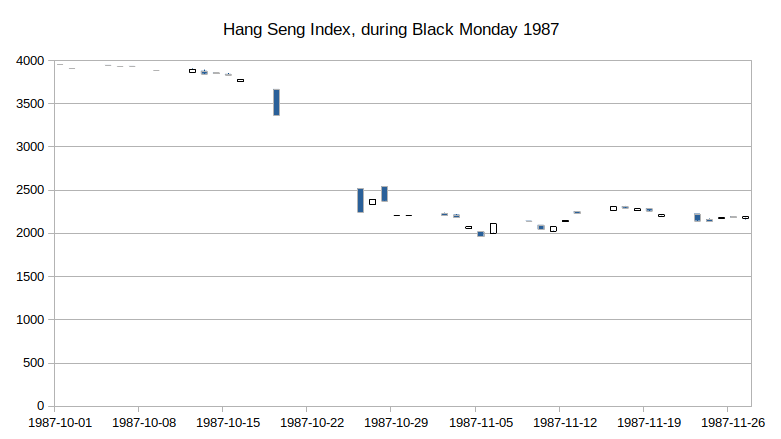 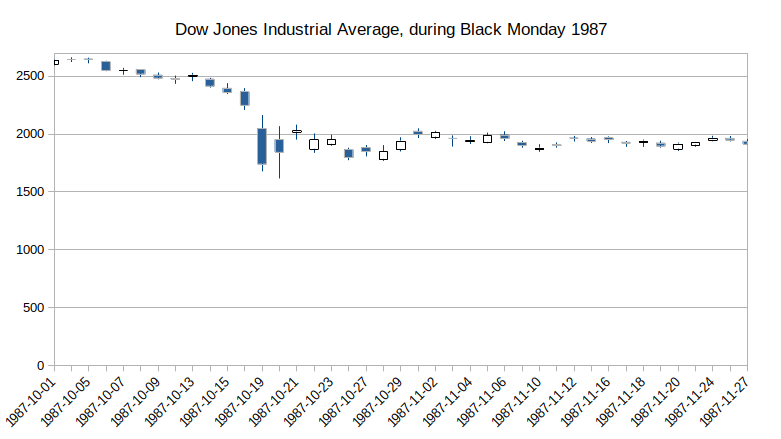 Going back to the 2-month period before and after Black Monday, combining both graphs and normalizing by 1st October index value shows how significant the difference is between HSI (which has a 4-day suspension during the crash), and DJI (which has no suspension). To reduce the effect of geographical/political issues, I also added Nikkei and KOSPI to the graph. 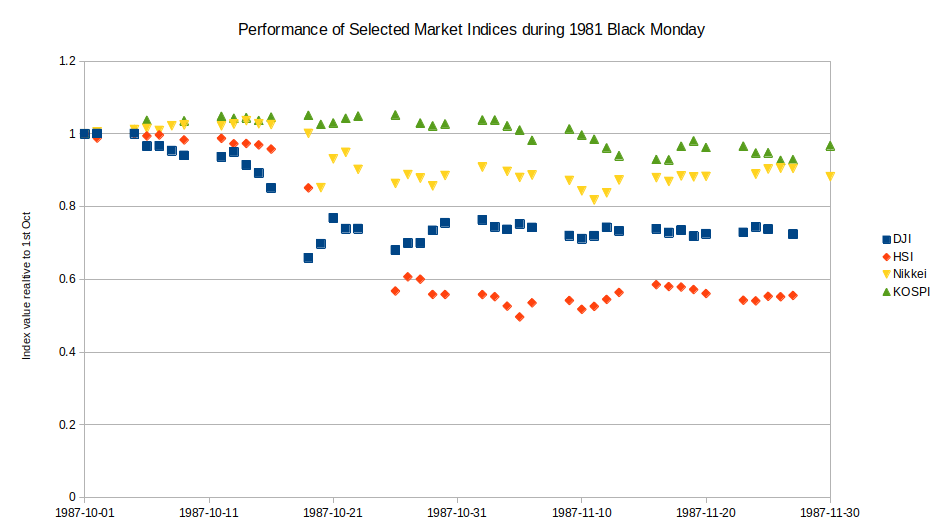 So here, I showed that suspending trading on a regional exchange for just a few days have a significant negative effect on both short and long terms, compared to those markets which stays open. Now imagine the effect of closing an exchange thousand times larger and for multiple times longer. This is an artificial financial risk that few people dare introduce to the already tumbled market.

Not the answer you're looking for? Browse other questions tagged stock-markets stock-exchanges or ask your own question.

3
why would closing price of a stock be different from different sources, and which would you take as the real price?
0
Are spot market ,regular market and ready market same in stock trading if not then what is the difference?
1
Identifying the market of a stock
13
Why do stock markets end all trading for the day after a 20% fall?
37
Why would the stock market plunge on oil price crashes?
2
Why are stock prices so volatile outside trading hours (after hours or pre-market)?
0
Is there a registry of all the market abbreviations for stock exchange?