How can I pay off a charge on my credit card over several months without paying interest?

In this answer, RonJohn describes a method of paying off credit card debt in such a way that large balances can be carried over from month to month without incurring interest. I don't follow the argument in the answer, and the comment thread is now far diverged from the original question, so it seemed appropriate to ask another.

The numbers in this spreadsheet don't make sense to me. 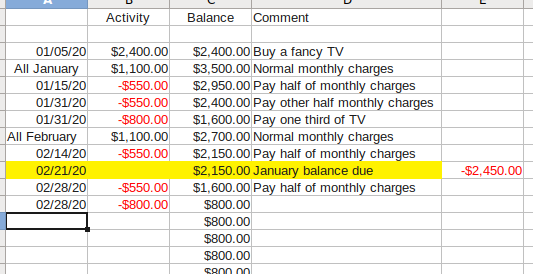 (The below uses month-day order.)

It's a bit of an illusion—a magic trick of sorts.

I'm going to refer to the hypothetical, fictional person in the answer you link to as RJ.

In the scenario described therein, RJ buys a TV on 1-5, then pays it off in a series of payments from 1-15 through 2-14. That's not "over several months" at all; the TV is paid off within 6 weeks of its purchase.

I agree that the spreadsheet does not make any sense.

The only due date mentioned is February 21 and so there must have been a payment made on January 21 also which is not shown at all. But maybe not. Let's assume that the credit card statement closing date is the end of each month. Most cards have balance due dates that are 25 days after the statement closing date but let's assume that RonJohn's card allows only the 21 days grace period codified in the CARD Act and so the fact that there was no payment made on January 21 means that the statement that closed on December 31, 2019 showed a $0 balance and so no payment was due and so none was made. This also tells us RinJohn's card account is in the blessed state where no interest is being charged on current purchases from the day of posting because the previous month's statement balance was paid in full by the due date. In short, the card account is in the pristine condition that we all expect RonJohn's accounts to always be.

So, what does the January 31 statement show as the closing balance on the statement (the amount due by February 21 to keep the account in pristine standing)? Well, it would have been $3500 except that RonJohn paid off $1900 of the current charges during January. These are charges that _have not been billed as yet and are not being charged interest anyway because the account is in pristine state! So, the statement balance shown on the January 31 statement is $1600 ($3500-$1900). As long as $1600 is paid by February 21, no interest will be charged. Indeed,

no interest would have been charged if RonJohn had simply kept his checkbook shut from January 1 through February 21 and paid $3500 in a lump sum on February 21. Nor would any interest be charged on the purchases made in February (billed in the statement with closing date February 29) because the account would have continued to be in pristine state! If one has paid the previous month's closing balance in full by th4e closing date, no interest is charged on the current purchases.

Put another way, the same effect could have been achieved by paying off each month's statement balance in full by the due date shown on the balance statement. Heck, one can essentially get interest-free "loans" by buying expensive items with a credit card at the start of the card's monthly billing cycle and paying off the credit card statement balance in full by the due date. Not a way to get rich in these days of 0.01% interest on checking accounts, but still a way to get a pork-bristle purse out of a sow's ear instead of just porcine earwax. There can, of course, be many good reasons why multiple payments are made on a credit card instead of just one lump sum by the due date. One possibility is that the card holder is paid weekly and so prefers to make make payments on a weekly basis, but the claim that a large charge has been carried forward for several months without paying any interest whatsoever is misleading. At best, one can put off the payment for 55 days (charge made on the first day of a billing cycle and paid off in full 25 days after the billing cycle closes a month later) which is less than two months.

Not the answer you're looking for? Browse other questions tagged credit-card or ask your own question.

0
Should I apply for a new credit card once the promotional rate on my current credit card expires?