History of marginal-rate taxation in the US

I recently came across an article that made me think about marginal tax rates in the US. Specifically, in the fourth paragraph there is the statement:

He once asked me to explain to her that if she would cut her salary by almost a third, she would earn exactly the same amount per picture (in a lower tax bracket) and MGM would enjoy the savings.

My first thought was that this was not possible and a result of the (fairly common) misunderstanding of the way marginal tax rates are applied. Seeing as this advice was given to Greta Garbo in her prime, though, I wondered if the marginal-rate type of taxation that I'm now familiar with has always been the case in the US and that this anecdote is just a historical anomaly.

Has the US always used a marginal-tax system for income tax, as is the current practice?

Yes. Since the income tax was first established in 1913 it has been a marginal rate system.

Is it mathematically possible that, under a marginal-tax system as is the current standard, the quoted statement could be true?

No, it's not possible under a marginal system for two different incomes to have the same (non-zero) net take-home pay. Since only a portion is taken out of each "tier" of income independently (e.x. rate 1 on income up to X, rate 2 on income between X and Y, etc.) then the amount of take-home pay as income rises is continuously increasing. The only way for that to be possible is if there was a tax bracket of 100% or more.

Tax brackets alone would not explain the proposed plan in the story. It's possible that :

Thus, given the nature of marginal rates, she could never net the same amount after a pay cut.

Again hypothetically, if some other (non-marginal) expenses had a ladder clause which increased the rate when her income increased, it might very well have netted her less to take a lower salary.

Or... Gottfried Reinhardt has imperfect memory of something that he had imperfect knowledge of even at the time it happened.

Has the US always used a marginal-tax system for income tax, as is the current practice?

Yes. It's been that way from the start. The Bradford Tax Institute offers a nice history with further links to the 1913 tax form.

Is it mathematically possible that, under a marginal-tax system as is the current standard, the quoted statement could be true?

No. But with a disclaimer. There are 2 impacts to "the next $100" earned. One is the marginal rate applied. The other is the income's effect on potential credits or other deductions. For example, there is a $2000 college tax credit that phases out for joint earners from MAGI $160K to $180K. This effectively creates a phantom additional 10% marginal rate for that income range. The key here is "phases out". There are some cases where the tax credit doesn't phase out over a range, but is just cut off. So that next $100 can cancel out the credit completely, creating a 'marginal' rate over $100%. This is not common, nor does it apply to the situation you posed.

I thought more of this and was able to walk myself through the answer to question 2.

So long as the net (after tax) income is monotonically increasing with gross income, it's not possible to earn the same amount after taxes by cutting a salary. This is because the effective tax rate in a marginal system is continuous and monotonic vs. income and income vs. income is obviously monotonic. A product of these will also have the same properties, so there will never be a constant-net-income line that intersects at multiple values of gross income:

Here is an illustration of the previous statement with a made-up tax bracket model. 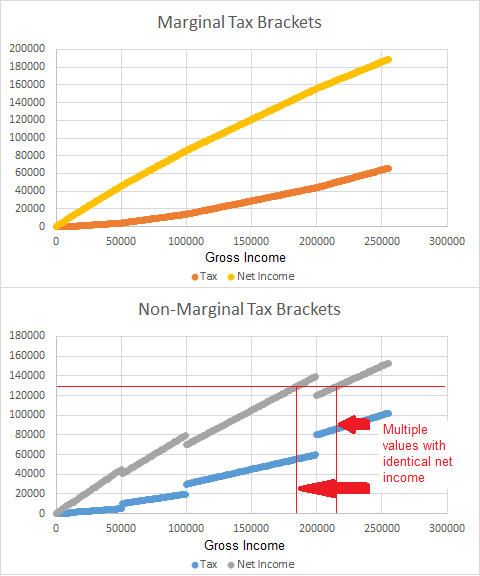 Since the modern federal income tax was introduced in 1913, the marginal rates have always increased with income; starting with 7 brackets in 1913, quickly increasing to 56 brackets by 1918 and then decreasing through the second half of the twentieth century. (historical rate tables (pdf)).

Ignoring tax features outside of the rate structure, is it not possible for an individual to have gross pay reduced by one third but maintain the same after-tax pay (although likely that the after-tax pay would be reduced by a smaller percentage than the gross).

The question remaining is what deductions or credits would apply to a high-paid actor between the wars to make the statement more-or-less true; to what degree the anecdote is a result of faulty understanding at the time or faulty memory; and to what degree it was an exaggeration by a hiring agent whose interest would be in obtaining talent at the lowest salary he could convince the actor to accept.

Not the answer you're looking for? Browse other questions tagged united-states taxes income-tax historical-data or ask your own question.

4
Specifics of filing dual-status return for family
5
Tax: can back pay be counted for previous years?
4
Retirement as arbitrage of the tax system
0
Are there disadvantages or caveats to be aware of when applying for an ITIN for a non-resident/non-citizen spouse?
11
Claiming a deduction for a dependant who has died
2
W-7 form for F-2 visa?
1
How can my sister in Europe cash her American tax refund?
6
Share 1099 payment with another sole proprietor
3
Can Traditional and Roth 401k be withdrawn in a ratio to minimize taxes in retirement?
2
Head of houshold: Domestic partner, and child, with joint checking