What news do get a stock price moving?

You wouldn't be able to tell where any of this happened from this chart: 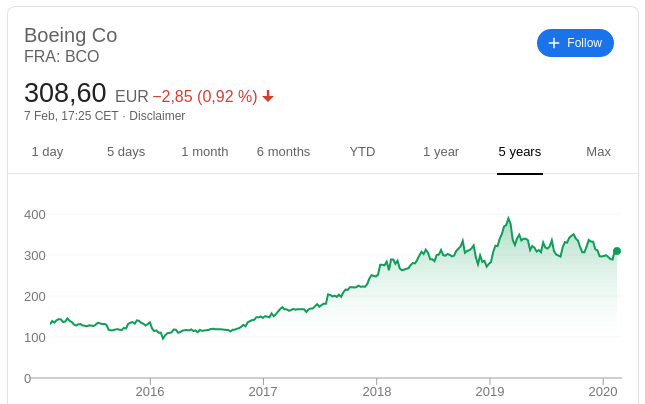 This also applies to other companies where I've noticed that nothing happened despite bad news. But I don't think they are as well-known as Boeing.

As these reports keep indicating that that company has serious quality problems, why do people stay interested in their stock? Shouldn't they be expecting that Boeing will sell fewer aircraft and spacecraft in the future because of trust problems and because of quality problems? What sort of news that aren't of the "That company's quarterly earnings are down by 22%." kind even do affect the stock price of a company?

If you look at a 5 year chart of Boeing where price ranges from $100 to $400 then news related price moves are going to be muted in appearance.

And if you check the news releases at those times, you'll see that the price drops correlate directly with the news. So your premise that news doesn't seem to affect stock prices is incorrect.

Boeing's stock price dropped 11% on the Monday after that crash, and another 9% since then.

Note also the sharp drop on 17 Oct 2019 when Boeing told the FAA that it knew about the MCAS problems. 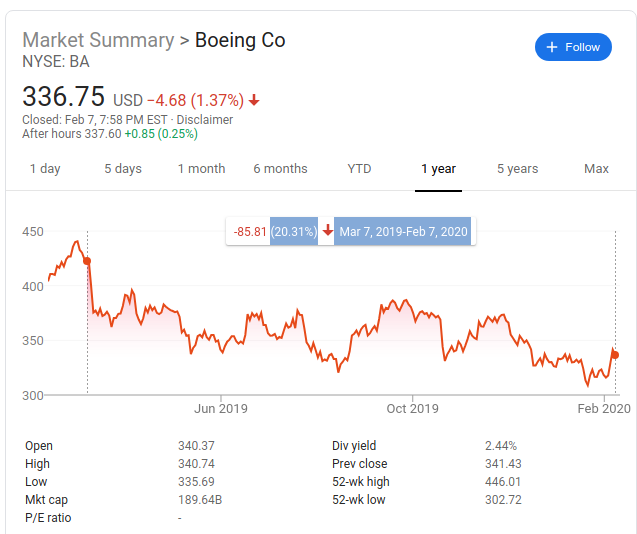 Now the jump has been higher, 100%. I suspect some of the rest is explained by share buybacks. US companies tend not to only distribute profits by dividends, they also buy back some of the shares from the open market. I do not have know accurate and full share buyback data of Boeing but the market cap of Boeing is around 200 billion and I did find a piece of news about a 20 billion USD share buyback program. This program can explain 10% further growth in the share price during the period of the program.

A partial explanation can also be the continuously low price of oil. In 2015, we could not necessarily foresee if the low oil prices continue. Today, we know the low prices did in fact continue.

We also in 2015 could not know if the attempts to curb carbon dioxide emissions are going to be a total failure. In 2020, the current information is that the global climate actions are nothing but a failure.

So, part of the continuous 4-5% growth of air travel is explained by low oil price and part by lack of action to curb climate change. In 2015, we could not necessarily know if the 4-5% growth continues. Today, it appears to be the case it continues.

Also, you are ignoring one fact about air travel. Air travel, per passenger mile, is the safest means of traveling. It is safer than elevators. It is safer than trains. The stock market investors know this. It is not a problem if some plane occasionally crashes. Air travel is still the safest means of traveling given a plane crash or two every now and then.

Also, part of the reasons is the increased valuation of stock markets. In 2015, Shiller CAPE ratio was 26.49 and today it's 31.82. This explains 20% growth in the valuation of the stock.

Not the answer you're looking for? Browse other questions tagged stocks stock-valuation or ask your own question.

41
Why does demand for stock rise when a company appears to have high future value?
2
Companies that use their cash to buy back stock, issue dividends, etc. — how does this this typically affect share price?
3
Does a rescheduled conference call generally mean “something's wrong” with a company?
1
How does an enlarged share base affect share price?
2
What can make a stock price rise without good news or results?
2
Insider News Price Move
0
What is the benefit of buying a share