What value should be used for a TrailingStop $ for a PUT Option in eTrade trading platform?

I have a PUT contract for a XYZ stock with a strike price of $160. I'm speculating that the stock price of XYZ can go down in the next few weeks. I would like to set up a TrailingStop order for a $ amount of $5. I'm assuming when the stock drops by $5, move the stop limit point. Is it possible to do that for a PUT? Should that be a negative or positive value?

I'm using eTrade platform and the screen looks like below. I tried to put 2 in the Stop Value $ field and it shows the estimated proceeds is $194.3. I originally paid $402 for a contract. 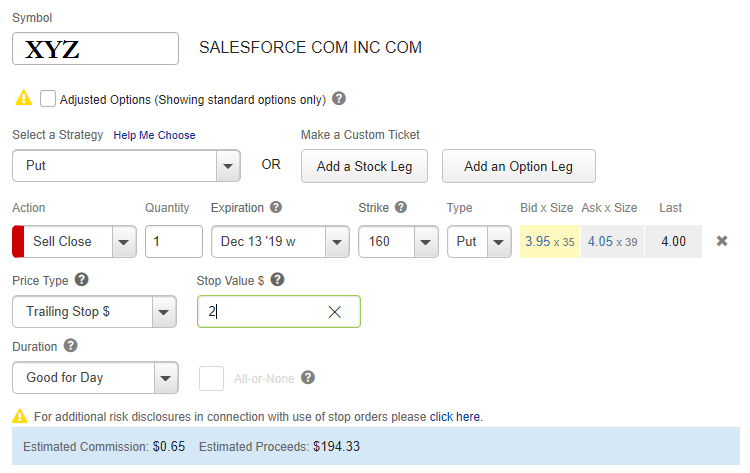 What you're asking is to sell the option when the price of the option drops $2 from it's highest sellable value, which is currently $3.95. That would mean that you sell it for $1.95 per share, or $195 less commissions, so roughly $194.33. Since it's a put, that's only going to happen if the stock price rises, which is the opposite of what you predict.

There's not a way on eTrade to trigger the sale of an option when the underlying drops by an amount. Since you want to cash in a put if the stock goes down (which would raise the price of the option), what you want is a limit order instead of a stop order.

So you could, for example, set a limit order of $5.95 which is $2 more than the current sellable price, or roughly $595 less commissions.

Or, since there's only 10 days until expiry and a drop will make the option more in-the-money and closer to its intrinsic value, just hold the option until maturity. At worst you'll sell your shares for $160, or keep them if they're worth more than that.

Not the answer you're looking for? Browse other questions tagged options put-options or ask your own question.

0
Understanding Put Options
0
Buying a PUT OPTION in the Out Of The Money
0
What do you mean by Option losing value?
1
Why did my put option lose value when the stock price moved down?
3
Option Value going lower even if the Price of the Underlying stock goes high
0
Why sell a short put at a strike price above current price of the underlying?
1
What should I do if my cash secured short put is deep in the money?