For a mutual fund - if jensen's alpha keeps increasing with time, then how does beta of the mutual fund get impacted with time?

While building the above excel model, I thought of a hypothesis (which might be far-fetched) - "if the alpha of a mutual fund keeps increasing or is at least positive for any given time period (let's assume 3 years), then the beta of the fund should also increase with time. That means with time expected returns will keep increasing as beta is increasing and it will become difficult for the mutual fund to keep increasing alpha

The reason for my hypothesis is explained below:

β implies changes in returns of the fund compared with the market. It is explained by the equation: Rp(Mutual fund return) = β(beta) * Rb(Benchmark return)

But if the fund is consistently beating expected return and has an increasing alpha, then that means either - Rp is increasing faster than β * Rb or Rp is decreasing slower than β * Rb

In this case, if Rb is decreasing at X% rate then Rp will be decreasing at X-𝛿% where 𝛿 is positive. Hence, for α to keep increasing β too will decrease.

Question 2: Is this scenario possible in the real world? I have tried this in the excel model too and again it looks reasonable as shown below 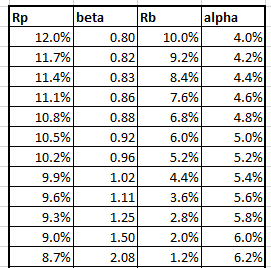 However, this brings me to the conclusion - Mathematically, all combinations of Rp, alpha, beta and Rb seem possible. But, intuitively, I feel that as alpha increases, it will have an impact on β and since, β is essentially a regression coefficient between Rp and Rb and it will always try to balance the equation - Rp = β * Rb. That means it will be difficult for the fund to keep generating positive alpha for a longer duration. Question 3: Is this conclusion right?

Not the answer you're looking for? Browse other questions tagged investing mutual-funds risk volatility beta or ask your own question.

0
Why does the Fidelity Canadian Bond Fund have such a high beta? How is it measured?
4
High expense ratio funds - are they worth it?
5
Is the risk premium with insurance higher or lower than investments?
2
Question about the Federal Funds Rate
7
Need help with the concept of yield in a fund
2
How should trust payments be arranged to preserve the principal?
2
Chart which shows performance by entry date
1
Does a mutual fund buy new shares when it issues new units for individuals?
2
Will mutual fund managers be penalised or even fired if their fund performance is too poor?