Does paying a mortgage early mean you effectively paid a much higher interest rate?

Most mortgages use an amortization schedule that have you pay more interest than principal at the beginning and then less interest and more principal as time goes one.

You can see this using this online schedule calculator: https://www.bankrate.com/calculators/mortgages/amortization-calculator.aspx 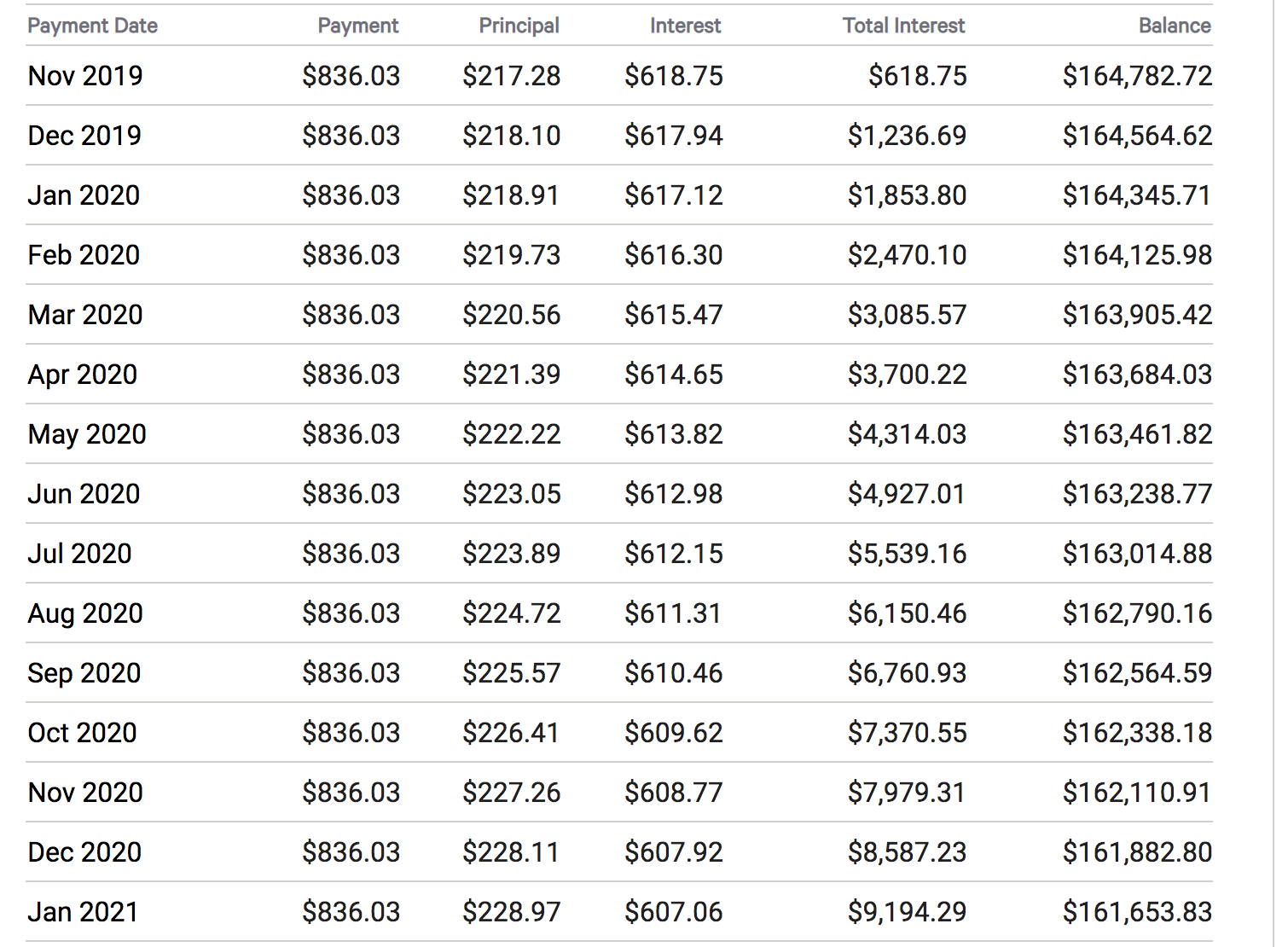 Does that mean that paying a mortgage early causes you to effectively pay a higher interest rate? Or am I miscalculating something?

Your first sentence is written in a way that highlights a common misconception about how term loans work:

Which is the exact amount in the amortization table. You can repeat for the second month:

And so on for every month. In other words, you are always paying exactly 4.5% per year or approximately 4.5%/12 every month. Note this means if you ever make an additional principal payment, then from that day on you'll have changed the amortization table- you'll pay less interest and gain more principal than what you see on the original table. This is why even small amounts of additional principal payments can reduce your total loan term by months or even years.

As others have pointed out, the reason you calculated higher interest than 4.5% in the first year is because you counted 13 months instead of 12. If you use 12 months you would get:

The reason that's lower than your stated APR is because your balance decreases each month and so you pay slightly less interest each month. If you were to use the average balance over the course of the year as the denominator instead of $165K you'd get closer to exactly 4.5%. The same is true if you take the average balance over 20 years and calculate the interest paid- it will be close to exactly 4.5%.

I see your confusion:

You're looking at the interest as if it applied to the whole loan balance. That's not what actually happens--the interest rate remains the same but as you pay down the loan the amount that you are paying interest on drops.

That's what that chart really is showing--as the amount owed drops the interest drops and the amount that goes to the principal goes up. This is why financial advice strongly stresses paying extra on your mortgage. One extra payment at the start can (depending on the interest rate) cut as much as a year off the duration of the mortgage.

It is not so much that you are miscalculating, but that what you are calculating is not meaningful in the context you're trying to use it ("the annual rate of the loan"). You are essentially trying to compare apples with oranges.

You have taken the total interest paid (over one or 20 years), expressed this as a fraction of the original loan amount, and then "un-compunded" that rate to get a "yearly percentage".

The question then is: what do these rates represent?

They are the rates of return necessary on a single, lump-sum deposit (where interest is compounded monthly) in order to earn the equivalent of the interest paid on the mortgage over the same period.

(These figures would also apply to an extreme form of a "balloon mortgage" where no repayments were made over the term of the loan, and the entire amount owing (accumulated interest + original principal) was repaid as a lump-sum at the end of the period.)

Yes, the 2.67% is a lot lower than 4.38%, but this just shows the effect of compound-interest over a longer period.

Using the same repayment calculator as you1 and a fixed-deposit calculator I found2, I prepared the following table (which also shows the figures for the full 30-year term):

(a) Interest paid is taken from the loan calculator page, using the October 20xx line in each case. Note: I originally mis-transcribed the 1-year figure as 7,360 (giving very slightly different % rates).

(b) This is the interest divided by the loan amount and expressed as a percentage.

(c) This is the figure from (b) converted to an effective annual rate, using

This is similar to the calculation you made to get 2.71%, except (i) I use the number of months when taking the nth-root, and then multiply by 12; and (ii) I used the October figures where you used the December figures.

(d) These figures are from the fixed-deposit calculator, using the rate as shown in the line above (e.g. "2.67"). If the exact, calculated EAR is used, the calculator's figures agree to the dollar with the interest paid figures from (a).

And the final word: it really does not matter what rate you calculate: the bottom line is that by paying the mortgage off early, you're only paying a little over $7k instead of over $116k in interest!

2 https://www.calculator.com.my/fd-savings. The fixed-deposit calculator happens to show amounts in Malaysian Ringgits (RM), but that does not matter for our purposes: we're only interested in the numbers.

As long as there is no prepayment penalty, and there are no tricks like counting the effect on the rate due to “points” being charged, the rate is the rate. 4.5% is the same through the day you pay it off, no matter the time. I don’t know how you are getting the other numbers.

Each month, the interest is calculated by multiplying the remaining balance by the interest rate (as a monthly number, or annual divided by 12). The math you went through was not correct. When I set up a spreadsheet to calculate my mortgage balance each month, I am correct, to the penny, as long as I respect rounding that fraction of a cent.

When you pay early, you pay less interest in absolute dollar amount. The larger absolute dollar amount of the interest for the full length loan is compensated for by a larger time period. You are treating that longer time period as being 20 years, but that is too long of a time period, and so you are overcompensating and calculating an effective interest rate that is too low. While the overall duration is indeed 20 years, each individual payment has a term less than that. So to calculate the effective interest rate, you need the standard formula that takes into account the fact that there is no fixed term that applies to all the payments.

You are not comparing apples to apples. You are correct. The APR for year 1 might be 4.84 if you pay it off in one year. But you are comparing it to a 20 year loan. Therefore you have to average that out; 4.84 the first year and 0 the remaining 19 in order to have a meaningful comparison. = .24% APR on 20 year "loan"

You are ALL missing the point. He is looking for the "equivalent"rate AFTER paying off the loan early. That is, on a 30 year loan at x% taken to term, I paid x%. That is not debatable. If I pay off the loan in 20 years, it is the "equivalent" of having taken out the loan ORIGINALLY at a much lower rate of .8x% or what have you. If I borrow 200K for a mortgage and pay it off in 1 day it doesn't matter if I borrowed the money at a rate of 90.0%. My effective rate is 0%. I incurred near zero interest charges. After one year it is probably close to 3%. paid in full after 10 years probably 10%, and so on. That's what he's truly after. This is why 15 yr loans are over-rated. The rate spread vs a 30-yr loan is minimal, but if the 30 yr loan is paid off in 15 yrs the original rate difference is almost 0, while affording the borrower the ability to flex down to a much lower payment should they incure time of need. NEVER take out a 15 year loan. If you can get a 1000 year loan you would take it and pretend and pay as if it were a 30 yr loan. Risk aversion my friends. The only case where this is a problem is for the debt-management challenged borrower with no economic discipline. Better to pay a MARGINALLY higher EQUIVALENT rate than to lose your home during unexpeted short term events when high mtg payments will be tough -think COVID.

See above. A 30yr mtg with interest rate X% paid off in 15 yrs will be equivalent to having taken out a 30 year loan on the same date at lower than X% and very close to the rate of what a 15-yr loan would have been on that same date. Difference is so marginal as to not merit consideration, but provides much risk avoidance. Do I care that I paid 3.875% for 15 years for what was originally a 30-yr fixed vs 3.75% over those same 15 years if I had takent the 15yr loan to begin with while providing abiilty to pay less during times of need? Calculate the interest diference. Negligible. We are not talking about interest only or neg-am loans here with no principal reduction or even increasing balances risk. Risk benefit ratio - slightly more interest paid vs losing my home. Not a difficult decision. Take the 30yr loan and pay like it's a 15 yr term. Again, assuming a modicum of personal fiscal discipline of the borrower.

Not the answer you're looking for? Browse other questions tagged mortgage home-loan mortgage-rate or ask your own question.

2
Put extra payments towards almost paid off house or newer house?
2
Paying off a mortgage early
5
Am I paying too much in mortgage interest?
0
Effective interest rate for mortgage loan
16
What does a mortgage percentage rate really mean?
3
What is the math used to calculate the impact that overpaying a mortgage has an an amortization table?
5
How does paying extra on my mortgage affect my amortization schedule?
6
Does a cash back mortgage at a higher rate with the cash immediately applied to the principal make financial sense?
1
Calculate interest rate of mortgage loan that has deferred (suspended) payments