How safe is the 4% rule if U.S. returns trend towards World returns?

I keep hearing about the 4% rule. I know it's based on historic returns, but aren't those returns based on U.S. stocks, at a time when the U.S. was ascending to the peak of "world superpower" status? Has there been any studies on how the 4% rule would fare if the U.S. stock market returns to the mean of the rest of the industrialized world? Would it make any difference?

Not safe at all. A 4% withdrawal rate would require the US stock market in the 21st century to produce returns similar to those of the 20th century, i.e. in the vicinity of 7% in real (inflation-adjusted) terms. Fair estimates for stock returns going forward are not this high. Rick Ferri proposed a real 5% over a 30-year horizon in 2015. I recall Bernstein in his book "Rational Expectations" (2014) proposing a real 3.6% over the very long term. These long-term estimates are based on the Gordon equation. According to this model, the long-term growth of a 100% SP500 stock investment in real terms would be the current dividend yield (~2%) plus the expected per share dividend growth rate (often given as 2%).

It is interesting to look at what happened to other countries in the past to get an idea of what could happen to the US in the future. The following graph shows the maximum sustainable withdrawal rate by percentage of allocation to stocks for various countries. The graph shows that despite the popularity of the "4% rule", very few countries could sustain a 4% withdrawal rate between 1900 and 2008 (before the crash) regardless of the stock/bond allocation. Even in those few countries, mainly the US and Canada, where it could work reliably, allocation mattered: At 100% stocks no country sustained a 4% withdrawal rate for every 30-year period in the 108 years of the data. Take a country that was not devastated by war in the 20th century like Switzerland or Australia. With a 100% stock allocation, 3% would have been too much for Switzerland but ok for Australia. With a 50/50 stock/bond allocation, 3.5% would have been too much for both countries.

It seems likely that the 21st-century US will do less well than the 20th-century US in terms of maximum sustainable withdrawal rates, given expected stock returns. Notice that except for Spain the countries that at some point failed to support a 2% withdrawal rate were all devasted by WW2. Spain had a civil war in 1936. 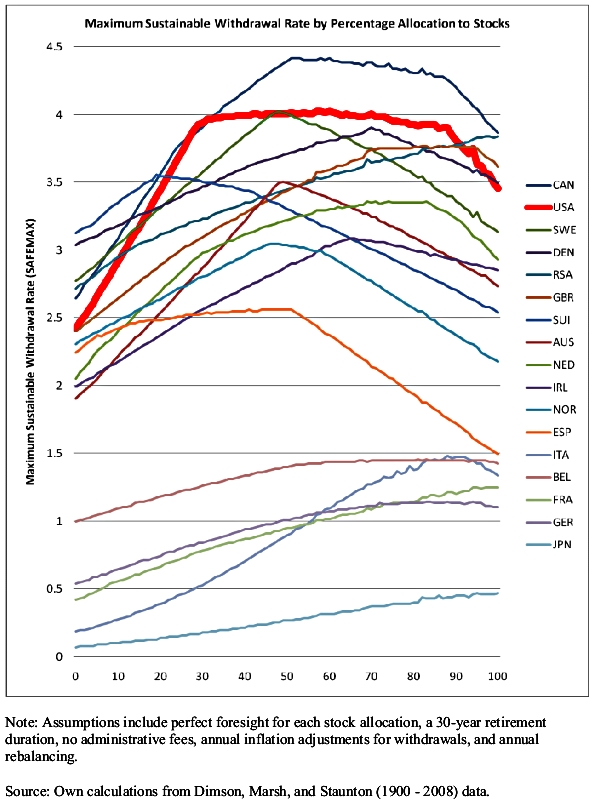 Answer: The mattress strategy, with 2% constant inflation and a 3.33% yearly withdrawal adjusted for inflation of the original amount, will bring you to the end of year 23 and a 2.5% withdrawal rate, to the end of year 29. If you take 3.33% of the original amount out every year without adjusting for inflation, you will have to spend almost half in real terms in year 30 as you did in year 1, which is unacceptable for most people.

The TIPS strategy would work as you describe, assuming that:

Point (6) is important. Note that the graph above shows you the maximum withdrawal that always worked for a 30-year period in the past for a given allocation of stocks and bonds. This means that at these maximum withdrawal rates, with 1% of the starting retirement years you would have gotten exactly 30 years of withdrawals. But with the other 99% of the starting years, you would have gotten more years than this, giving you a buffer in case you lived more than 30 years in retirement. With TIPS and 3.33% withdrawals, you have no such buffer, if you don't die before the end of year 30, you will run out of money.

The 4% rule was created by looking at hypothetical retirees throughout all of the history of the stock market. 4% was found to always ensure that a retiree never ran out of money for at least 33 years regardless of what period of history you looked at. This includes a retiree going through any of the 30 year periods that intersected the Great Depression, WWI and WWII, Black Monday, and so on. So unless something happens that's worse for the economy than the great depression the 4% rule should be safe.

I think you could answer this by looking at how the world market does on average compared to the US market. Essentially a comparison of VTSAX to VTWIX. This website will allow you to do exactly that. While VTWIX has a lower growth rate over a 10 year period (8.57% versus VTSAX's 13.09%) it's still higher than the ~7% annualized growth required to make the 4% rule work.

Some other things to consider:

Not the answer you're looking for? Browse other questions tagged savings retirement or ask your own question.

6
Lower risk short-term investment during periods of low interest rates
4
Online savings or money market account with a guaranteed rate?
5
How much should I save each month so I can retire early, in my Third World country?
2
Avoiding timing traps with long term index investing
1
In what order should I save?
0
Should I use my non-tax advantaged investment account to pay off debt?
2
I have net positive income and no debt. Is it better to keep my $30k checking liquid, or invest it?
17
How to start toward financial independence
1
What to do with spare cash, in the short term?