The way I understand the mortgage tilt effect is that the lender "prices in" the expected rate of inflation into the contract borrowing rate, so that the lender is compensated in the earlier years of the loan life for the loss of the real payments in the later years.

So is there a winner or loser in this "mortgage tilt" effect?

This looks like a forward contract on the interest rate risk where one party locks in the anticipated interest rate to hedge against any loss of real purchasing power of the fixed income stream (e.g. debt services) while the counter-party is locked in to take the opposite position? But, then the borrower really has no option to alter this contract, right?

My other question is: how does the mortgage tilt effect differ in the fixed rate mortgage v. adjustable rate mortgage, in the general set-up? 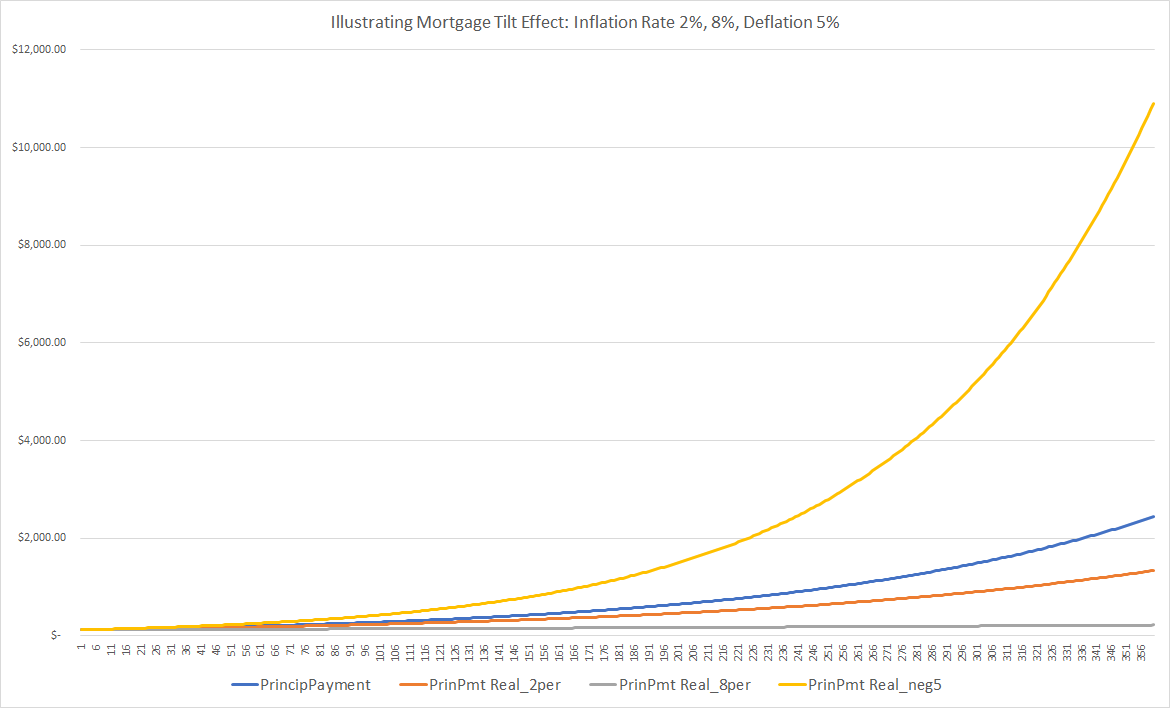 The above is an example of how the mortgage tilt effect actually hurts the borrower.

When there is an inflation, each payment is worth less in real terms, because inflation erodes its purchasing power. In my example, the loan is 30 years with monthly payment about $2500.

I'm not sure what "tilt effect" you're looking for (it's possible that there are multiple things in the world with that name). If we're going by this article or this paper, the tilt effect is a recognition that, over time, mortgage payments get effectively cheaper for most borrowers. Underwriting guidelines don't (generally) change with inflation so the same rule can lead to borrowers getting approved for much larger loans than they struggle to afford when inflation is low and being denied loans they would have no difficulty repaying when inflation is high.

For most borrowers, it's reasonable to expect that their wages will grow faster than the rate of inflation over the course of the loan both because wages generally rise faster than inflation and because people can generally expect to get a promotion or two at some point in the 30 years they are repaying a loan. Even if a borrower has an adjustable-rate mortgage where the rate rises with inflation, it's likely that borrowers are going to have a relatively easier time coming up with their monthly payment in year 20 than they did in year 1 because they've gone from a Widget Polisher to a Senior Widget Polisher to a Supervisor of Widget Polishing and because their wages have increased faster than their payments.

Mortgage underwriting, however, focuses on just a current snapshot rather than looking at likely changes to income over time. Whether you're approved for a mortgage, and how much you can be approved for, depends on your current salary and savings. If inflation is high (and thus rates are high), mortgages are relatively expensive and relatively fewer people qualify. If inflation is low, mortgages are relatively inexpensive and relatively more people qualify. Conversely, though, if you get a mortgage in a high inflation environment, it is likely to become relatively cheap relatively quickly-- you may need to scrimp and save for a few years but pretty soon the monthly payment will be relatively easy to afford. If you get a mortgage in a low inflation environment, on the other hand, you may find that it doesn't get cheaper very quickly because your wages aren't rising very quickly. If you have to scrimp and save for 30 years in a low inflation environment rather than 3 years in a high inflation environment, it's more likely that you're going to end up doing things like refinancing to extend the term of the mortgage or taking out equity in order to afford a new roof and never end up actually paying off the mortgage.

I'm not sure what the graph in your answer is trying to show... An economy probably wouldn't survive 30 years of 5% deflation so I'm not sure why you'd include that line. It's also odd to assume that you'd have the same payment in all cases. That seems to assume that you're getting a fixed rate mortgage using today's rates and then seeing what happens with various future rates of inflation. Of course, it's awesome for borrowers that get a fixed rate mortgage at 3 or 4% when inflation turns out to be 8% over the next 30 years. But the mortgage rate includes the market's predictions for inflation so you would expect rates to be much, much different if inflation was going to be 8% or 2% over the next 30 years. Unless the markets are systematically underestimating future inflation, you're not going to get a 4% mortgage in an era of 8% inflation. Broadly, if rates are correct (and correctly project future inflation) and you hold the loan to the end of the term without refinancing, you'd expect the net present value of your mortgage payments to be basically the same regardless of the inflation rate. You'd pay a higher rate (and thus have a larger monthly payment) if inflation was expected to run at 8% and a lower rate and payment if inflation was expected to run at 2%.

10
Will a 7/1 ARM be better vs a 30yr fix rate for a mortgage if I am prepaying part of the principal every year
8
PMI cancellation based on original mortgage amount
2
Interpreting mortgage rates
1
Investment property refinance following a low appraisal?
2
How to hedge an adjustable rate mortgage to lock in the current rate for the whole loan duration?
0
Buydowns when House Market is Weak