Does yield curve inversion refer to the shape of the curve, or just its sign?

I would expect inversion to mean something more like "the first and second derivatives of the yield curve are negative over period X" or something along those lines which describes the shape of the curve.

Is it really true that the difference between 2 and 10 year yields is the primary metric financial analysts use from the curve?

As one answer points out, the full shape of the curve is more complex than just two numbers, but of course also contains more information. Are there certain properties of the entire yield curve that economists do care about?

You seem to be concerned with the mathematics of the curve. But it's really important to remember that economics (and finance) is not a science like chemistry. Baking soda mixed with vinegar is not always a volcano, no matter how much of each ingredient is mixed.

The "yield curve" has virtually nothing to do with the curve. It has nothing to do with standard deviations. The issue is that the market is sending a very pessimistic message when it floods resources in to longer term debt to the point that it's priced higher than short term debt.

A central tenant of economics is growth. The population of humans expands, markets expand, new products are invented, etc. There's a general assumption that inflation will be positive, the buying power of $100 will diminish over time. All of this means that more time equals more risk which should equal more return. When the "yield curve inverts" the market is saying, "I'd rather lock in to 2% over 10-years now, even though I know my return in the near term will be less than I could get in shorter term instruments, because in 3-years I think it will be even lower and I'll be beating the market at that point." It's saying "I think the risk of time is backwards right now."

But there is no chemistry-like economics formula that says 2-parts of inverted yield curve mixed with 1-part average wage increase equals recession. There certainly isn't one that includes how wide the 2/10 year spread is. It's possible that an inverted yield curve means absolutely nothing. It might just mean that there is glut of 2-year debt available right now.

It's kind of like predicting an earthquake. There are sensors placed all over the planet, hundreds of millions of dollars of grant money employing thousands of people to study earthquakes. Very smart people can describe in painstaking detail why earthquakes happen. Super computers crunching mountains of data to find causation patters. And, zero people can tell you when an earthquake will happen.

Since I find visuals to be helpful here are yield curve charts. 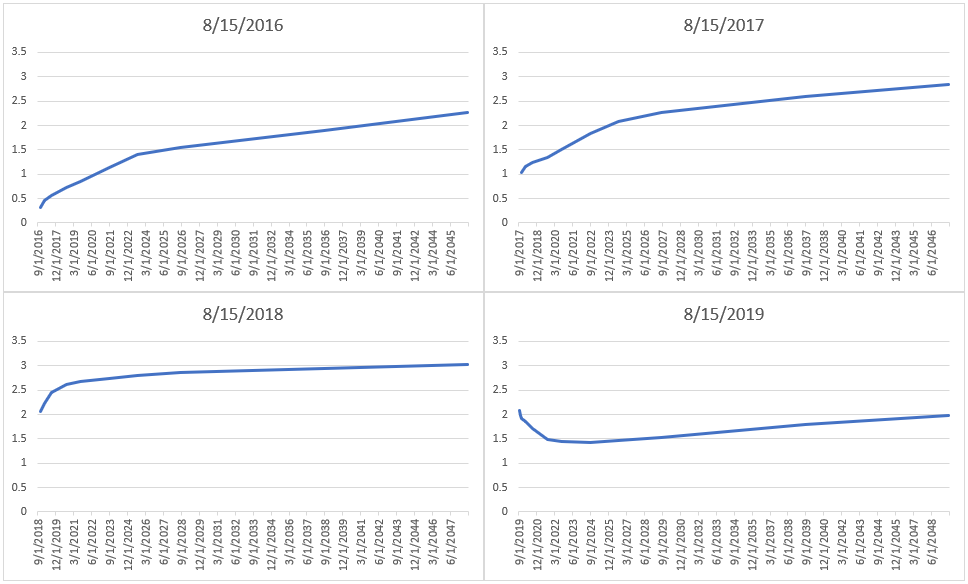 The yield curve is a graph of interest rates across time (2 month, 1 year, 2 year, 5 year, etc.) for similar debt instruments.

The most closely watched yield curve is for US Treasury securities. It looks somewhat like the upper 1/2 of a U laid on it's right side. This is called a positive or normal yield curve.

A flat yield curve is when there's is little difference between short and long term yields. This occurs when investors are unsure about future economic growth.

An inverted yield curve occurs when investors require a higher rate of return for taking the risk of lending money for a shorter period of time.

Many economists believe that an inverted yield curve means that investors expect lower interest rates in the future.

The 2- and 10-year rates are used to indicate an inverted curve. If the 10-year rate is lower than the 2-year rate, then the slope of the curve has to be negative at some point. Since the curve is usually monotonic (doesn't switch between increasing and decreasing) picking values at each end will most likely tell you if the curve in inverted or not.

Note that the second derivative only indicates the amount of curvature and not necessarily if the curve is downward-sloping or not.

Not the answer you're looking for? Browse other questions tagged bonds economics yield yield-curve or ask your own question.