Does the growth of home value benefit from compound interest?

I read Investopia's definition and my take away is that compound interest applies to an investment that yields some return on a regular basis and that yield is reinvested in that instrument. If I have a property as an investment property, then yield of the investment is the rent I could extract. I could consider this compounding if I use that yield to finance another rental property.

For the scenario of a property I live in, it's less of an investment and more of a savings instrument.

I believe that the answer to my question is no but I'm not very sure.

It's not an investment that can grow at the same rate year-on-year because higher prices put pressure on the ability to grow higher. There is a limit to how high a property can be valued at... whereas a compound interest model, there's no limit as you are accumulating more of that yield generating asset.

Edit This answer may also apply to this question.

Compound interest is only relevant when you get paid interest and you reinvest it.

In cases where you buy, hold and sell, with no income generated during the holding period, there isn’t any income from the investment to reinvest. There’s no interest, and hence no compound interest.

On the other hand, if your property is maintained in line with other properties in your area, and prices generally rise 10% one year and 5% the next, you can crunch the numbers as (1) * (1 + 10%) * (1 + 5%). In this sense, you do have compounding - but only of the notional values, and assuming the changes are calculated annually.

While I respect the others' answers, there's a similar math that applies here. The gain (or loss) each year is then part of the starting value the next year. 2 years of 10% gains don't result in 20% after year 2, but in a 21% gain.

The word 'interest' is wrong in this context, but compound growth does apply. In effect, I am ignoring the misuse of the word 'interest' and focusing on the math we use to discuss a long term change in the value of an asset.

To expand on comments I made critiquing @JoeTaxpayer 's answer:

Compound interest is a very specific method of calculating interest that produces a specific family of curves of returns, equivalent to exponential or geometric growth. It does not simply mean a really awesome rate of return.

If all you consider is your starting investment and your endpoint, you can't say whether your investment is equivalent to simple interest, compound interest, or something else. You can draw an infinite number of curves between any two points in a plane.

Consider three situations: $100,000 invested at 11% simple interest, invested at 5% compound interest compounded annually, or used to purchase an imaginary house in a volatile but upward trending housing market. The value of your investment over 30 years is shown on the graph below. Notice that all three have roughly the same starting point and end point, but don't look at all the same in the intervening years.

And of course if you'd bought a home in a depressed area, you might end up with a curve trending downward! 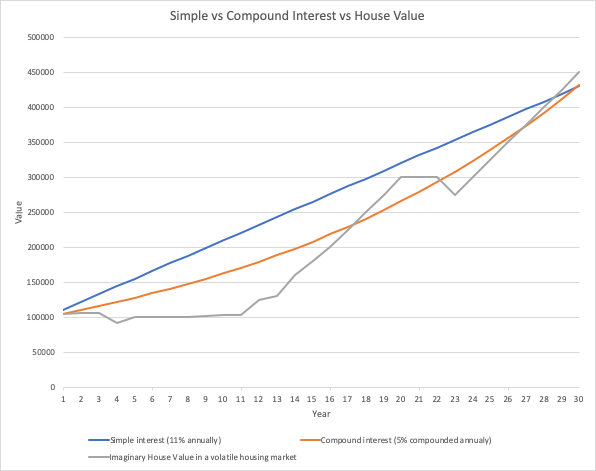 There is no compound interest on a home value. Here are a few examples:

Stock investments also aren't compound interest. Even if they guarantee a dividend each year, there is no guarantee that the price per share will grow. If you reinvest the dividends then the number of shares will grow, but the overall value of the investment could be steady or even negative.

A house is really very different. The value of a house will increase for 2 reasons:

But this is fragile. People can and do decide that housing prices have gotten too high so they'll live someplace else. Perhaps farther from the center of town, perhaps someplace else entirely. If prices get too high young people start deciding to live with their parents, or get smaller living spaces. Etc. So housing prices do not steadily increase. They go up and down erratically.

This is just a matter of perspective, isn't it?

Even more rarely do they say: up 8% compounded every year.

But mathematically it identical. It is just how you look at it.

If you open up the news paper.. It DOES say.. housing prices in a certain market (say london) was up 5% last year...

And since part of that growth can be attributed to inflation which is officially around 2.5%. In some markets, (like London, New York, Silicon Valley), the prices go up routinely at double digit rate per year... So you could make an argument for looking at real estate as an investment with compound interest.

2
Compound Interest Calculation
7
401k compound interest vs other compound interest
2
Is there a formula for the future value of a series of monthly deposits with interest compounded weekly?
3
Real Estate: Why does the maximum compound gain happen somewhere in the middle of the mortgage term?
0
Finding the price of an item years earlier from compound interest, simple interest, or APY
4
Compound interest rate
1
Is there a concept similar to "continuous compounding" but related to dollar cost averaging when buying (e.g.) shares or bitcoins?
2
Mistake in Investopedia's article on APY?
1
Proper way to annualize returns