Why is one person allowed to own a majority of voting rights in a publicly traded company?

I heard on Marketplace tonight that Mark Zuckerberg owns 58% of the voting rights in Facebook (not a majority of the shares, but he owns many Class B shares, which have 10 votes apiece compared to 1 vote for Class A shares).

I've read that situations like this are not uncommon. 20% of public companies have dual-class share structures with different amounts of voting rights, and company insiders get the ones with more rights. I'm not sure how often it amounts to a single investor like Zuckerberg, though.

Why does the government and/or SEC allow a single investor to own a controlling interest in the company? Doesn't it make the whole idea of shareholder voting a sham? From Vox.com regarding today's Facebook shareholder meeting:

Multiple proposals that would have put a check on the 35-year-old executive’s influence at Facebook were voted down at the company’s annual stockholder meeting on Thursday. They didn’t really have a chance in the first place: Facebook’s board had recommended shareholders vote against all of them, and because of the way the social media giant’s shareholder structure is set up, Zuckerberg’s vote is essentially the only one that matters.

And of course he’s not going to vote to take power away from himself.

The people submitting these proposals know that they're doomed, so these are obviously just symbolic gestures. The votes for these proposals only serve as a kind of straw poll that the management might take note of, they have no real meaning.

Why even bother having shareholder voting in this case, when the result is a foregone conclusion? If the company wants to make the CEO a dictator, they could just make all public shares non-voting, couldn't they?

regulation sec shareholder-meeting
Share
Improve this question
edited May 31 '19 at 21:21 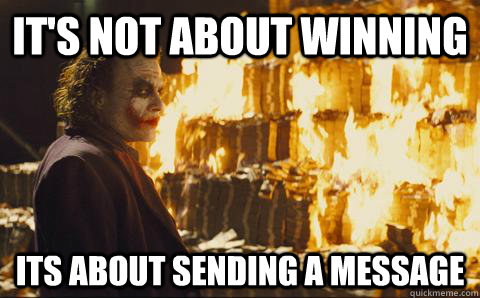 Well, technically the original quote is "it's not about the money, it's about sending a message", but still.

That's pretty much the long and the short of it - having a vote that is doomed to fail gets coverage and attention. It got you to notice, didn't it?

If you have a big pile of money/are an investment firm, you might potentially care about the fact that investing in a company buys you no meaningful voting influence. The shareholders involved are basically trying to draw attention to this vote, forcing it to come to a vote and forcing the board to demonstrate that in fact only one person's vote really matters anyway.

This is a form of what you might call investor activism - sure the vote doesn't pass, but it still puts pressure and visibility on management. It loudly says, "we are looking at you, and we don't like what we see".

It is indeed about control - who runs things? Some investors, especially activist investors, want more control about the details, and seek to do so through voting, control of boards, etc.

Other investors are perfectly keen to have their choice to be "buy or sell". You vote with your feet - if you lose confidence in the management's decision you just liquidate your positions and/or take a short position.

As to the government involvement, its pretty simple really - political will has not existed and/or been exercised in such a way to make this a law/regulation. The thinking is simply that if you don't like it, don't buy the stock, its not a secret - the filings are public and the vote structure is public record, and the system relies on rational actors maximizing their own self-interest by making informed choices. And if they don't make informed choices, that's easy - a more informed actor gets to eat them (or at least their money). A fool and their money are soon parted, and all that - and the system considers it just more grist for the mill.

This all does still have a political effect, which is that many people are increasingly uneasy about the power of multi-national massively large firms - like Facebook! - and the power that is concentrated into the hands of so few people. Well, to be fair, politicians are mostly upset that the "hands of so few" aren't referring to them for once, but many of the rest of us are just concerned that any such a small set of people (or one person) has so much power.

That is part of what this sort of activism is targeting, though. Investors can try to say, "hey, if you keep doing what we don't like, it sure would be a shame if we start throwing money into lobbying the government to do something about you, wouldn't it?" There's always a bigger fish.

The bottom line: this is part of what you need to decide when you invest your money. If voting rights are important to you or your investment strategy, companies that are organized like Facebook are a poor fit, and you should probably buy something else. If you want to use your money to try to control the direction of a company, you are of course going to need a lot of money, and you will either need to consider activism tasks like is being done here, or focus your money into companies where you votes would actually have some impact.

The flip side of this narrative is that Zuckerberg's massive undiversified exposure to Facebook equity keeps Facebook protected from activist investors seeking to potentially obstruct the mission of the company. Some shareholders like that an investor like Ackman can't buy up enough of the company to install board members and start to start unilaterally shifting the company.

No worries. There are checks and balances.

Minority stockholders have a number of options (pun not intended) in terms of litigation. I start Go-around Corp. and make 737 landing gear. I sell you a minority stake in Go-around. And after you're onboard, I use the capital to make war on Canada geese. I cover the American east with goose traps, auto-turrets, I'm wasting all the company's money on a wild goose chase.

You get to sue. You get to argue the case that my priorities are twisted, and that I'm not acting in the best interests of the company -- which bottom-lines to the bottom line. The judge goes "Yeah, you're not acting the way a company is supposed to, which is the pure unrelenting pursuit of profit (moderated only by an entirely reasonable mission statement, which is known for a long time and generally consented to by shareholders), and modulo modest deflections toward goals other than profit. But these are modest.

So for instance Target can give 5% of its profits to the community when it doesn't have to - but if it did 90%, the minority stakeholders could sue. 5% is modest, 90% isn't.

There is now a thing called a LLLC, which is a for-profit business with a mission, like a nonprofit. They get to prioritize mission (somewhat) over profit, but they have to say so up-front - so as an investor, your eyes are wide open. I could start the Goose-A-Way Landing Gear Company, and our Bylaws state we spend 90% of our profits eradicating Canada geese. But Boeing doesn't care who builds its landing gear, so the mission would be like an albatross around our neck - we would fall out of formation with competitors, since business profits weren't being reinvested or paid to investors. So LLLCs tend to exist for luxury consumer products where people are pleased to pay a premium for socially conscious products.

Here's an example of a lawsuit by minority owners at OP's example company Facebook: https://www.theregister.co.uk/2019/05/31/shareholders_win_demand_for_facebook_documents_on_cambridge_analytica/

A court in Delaware has backed investors who want to see internal emails and other documents relating to how Facebook handed data on 50 million users to Cambridge Analytica.

The ruling (PDF) said that shareholders provided enough evidence to support a claim that failures by senior management and board members at the social network may have allowed the illegal data slurp to happen.

Aside from the other answers which address why this is an important part of free markets, capitalism and a fundamental part of stock ownership, there are other more practical implications.

For one it isn't at all rare for a single investor to take a firm private, effectively buying all the stock and ceasing trading of the company, ending its publicly traded status. If one could not legally own more than half the stock this would be impossible.

Second and most importantly, the way stocks work this would be essentially impossible to enforce. Even if you made law that a single natural person could not own the majority of a company, nothing stops them splitting the shares between three trusts they own, owning 49% and giving a spouse or child 10%, or even giving someone shares and holding them to a contract that they will vote with you. Many companies are also owned by other companies. This whole structure makes such a law infeasible, as tracing the "true" ownership of shares is extremely difficult, essentially impossible in reality.

What you seem to be asking for is a rule that says that Zuckerberg can't let other people invest in his venture unless he accepts their direction over the purpose of the venture. This is certainly one way a corporation can exist -- as an entity that advances solely the interests of its stockholders. But this is not the only purpose of a venture.

Say Zuckerberg has some specific thing he wants to accomplish. If other people want to invest in that venture and share in its gains and losses, there is no reason that necessarily should mean that the venture should no longer pursue the goals Zuckerberg has for it.

Another, perfectly valid form of corporation is one where the shareholders contribute capital and participate in the gains and losses but the purpose of the corporation is specifically to pursue the stated aims of its founder.

Of course, those who invest should know precisely what they're getting themselves into. And rules do exist to prevent a founder from basically stealing from the shareholders.

Not the answer you're looking for? Browse other questions tagged regulation sec shareholder-meeting or ask your own question.