How can the drastic increase in trading volume that begins in the early eighties and extends to the present day be explained? My guess is that advancement in technology has increased the speed and efficiency of transactions and allowed more people to invest on their own thus affecting volume. Is this accurate? Are there other specific factors that have contributed to this increase? 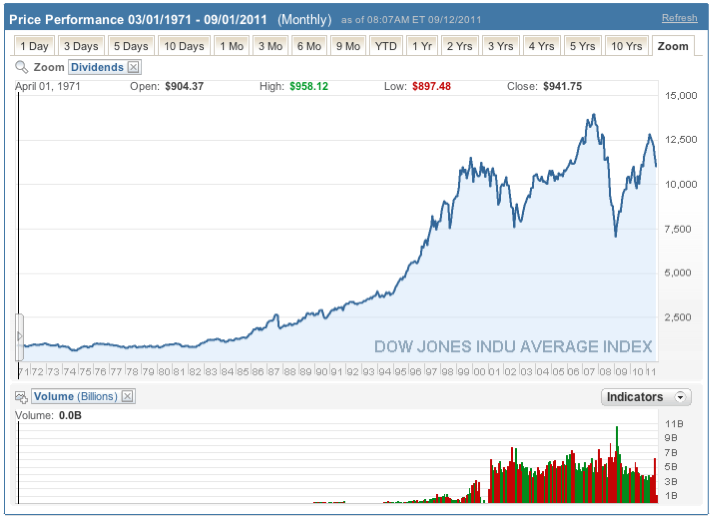 Prior to 1975, commissions for trading stock on the NYSE were fixed at 1% of the amount of the trade. In 1975, the SEC made fixed commission rates illegal, giving rise to discount brokers offering much reduced commission rates. Simultaneously, Electronic Communications Networks (ECNs) gained market share as alternative venues for executing trades. The increased competition led to further declines in commissions. Finally, as technology was widely adopted on Wall Street and human beings were largely taken out of the order execution process, commissions fell further. This had the effect of both drawing in new participants and increasing the rate of transactions of the existing participants (see Day Trading, which was largely unheard of prior to the technology revolution of the 1990s). Most recently, the exchanges themselves have shifted their business model to depend on high frequency traders, and the proportion of trades accounted for by HFT firms ballooned from under 10% in the early 2000s to over 50% today.

It's not primarily more people investing. In the 1980s stock exchanges went from open outcry trading floors where all trades involved actually exchanging pieces of paper to electronic trading. Once that happened, it wasn't long before most trades were executed by computer programs rather than human beings, turning stocks over rapidly for very short-term profits rather than long-term investment, greatly increasing the number of trades (and also increasing liquidity for the actual investors; it's by no means all bad).

Not the answer you're looking for? Browse other questions tagged united-states historical-data historical-analysis trading-volume or ask your own question.

10
Why is the volume highest at the beginning and end of a trading day?
0
what does "mean of log percentage of trading volume of index"?
0
How come stock price increase doesn't result in a volume increase as well?
0
Do inter-dealer transactions increase the trade volume when I buy shares?
0
Does options exercise increase a stock's trading volume?
1
Option trading volume inconsistencies