How to properly compare pension vs Roth IRA?

I am trying to compare the benefits of a federal pensions system FERS vs simply investing the money myself with a Roth IRA. I'm assuming that I work in a federal job for several years, but retire before I can receive benefits. In the case of either option, I contribute while I am working, but once I quit I do not contribute nor withdraw any money until retirement age. In both cases I contribute 4.4% of my salary.

I have done some calculations, but I'm not sure they are correct. I am currently 25 years old and will retire at 60. I make $60,000 now and expect 2% raises every year.

For example, if I work for 13 years and then quit my federal job (move to private sector or whatever) that means that the scheme sits for 22 years before I withdraw. I am assuming a 20% tax rate at retirement, and the FERS contributions and annuity payments are all taxable.

Before 13 years, the Roth will have a higher payout at age 60+. If I work for more than 13 years, than the annuity begins to pay more. These calculations give the following graph: 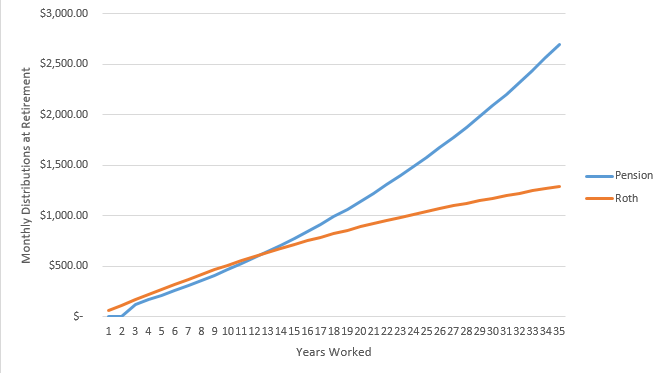 Here are my questions:

The Roth graph is defined as

where "y" is the current year from 0. In Excel this is literally

Generally, your math is correct. And generally, you're making an apples-to-apples comparison. There is some quibbling to be had about your assumptions (such as whether 2% salary growth is too low, whether 5% investment growth is too low, whether a 5% safe withdrawal rate is too high, whether a 20% marginal tax on the FERS pension payments is correct, and whether a retirement age at 60 would be realistic when two more years in the service would bump your annuity calculation from 1.0 percent to 1.1 percent for each year of service).

However, given the assumptions you have, I independently came to the same result: the "breakeven point" for the number of years of work needed for the defined-benefit pension of a FERS-FRAE participant to roughly equal withdrawals from a Roth IRA in an alternate world where you could put your FERS contributions toward a Roth IRA is at around 13 years of federal service. Higher assumed salary growth, lower safe-withdrawal-rates from the IRA, and lower assumed taxes on the pension pull that point forward, while higher assumed investment returns push it out.

There are at least three other considerations you need to think about when doing this comparison, though: COLAs, risk, and retiring at 62.

FERS annuities are subject to a COLA each year. The current COLA formula for FERS increases benefits annually by inflation as measured by Q3/Q3 growth in CPI-W. The COLA adjustment equals inflation if inflation is at or below 2%, equals 2% if inflation is between 2% and 3%, and equals inflation minus 1.0 percent point if inflation is above 3%. Thus, in a world where your safe withdrawal rate is equal to your annual investment earnings, your monthly FERS benefit might equal your Roth IRA withdrawals at age 60, but by age 70, your FERS benefit will be about 20% higher. This would push the "breakeven" point a little forward.

Your calculations do not include any kind of risk premium, either. FERS benefits are guaranteed*. If you are receiving a defined-benefit pension, you will get the amounts specified for the rest of your life. With a Roth IRA, however, you run the risk of running out of money before your time is up. In terms of my own financial security, $635 per month at age 60 guaranteed for forever is worth more than $635 per month at age 60 not guaranteed. In my view, the greater certainty under FERS also pushes the breakeven point forward.

Finally, the FERS benefit factor for annuity computations is usually 1.0%, and it would be 1.0% under the assumptions you have. However, that annuity computation factor bumps up to 1.1% for each year of service if you retire at age 62 with 20 or more years of service. Thus, the "pension" line would be quite a bit steeper for years after 20 if you took your delayed annuity at age 62, instead of at age 60. If you chose 60 to avoid this bump up, then this analysis doesn't properly take into account the FERS annuity supplement, which would increase your income for two years while you wait to receive your Social Security benefits.

For commenters, why does that Roth line look like that?

What about those assumptions?

Assumptions are always up for discussion, but you asked what you might have missed, so I figured I might add a little bit of meat to the discussion of assumptions that you picked.

So if I leave the federal service before 13 years, I should cash out?

No. Your contributions to FERS do not grow over time. Therefore, your lump sum payout at year 13 would be less than if you had been contributing 4.4% of your base pay to a Roth IRA over the past 13 years. Additionally, you would have to find a way to get lump sum contributions into a Roth IRA in one year, which may not be possible given Roth IRA contribution limits.

*Benefits are guaranteed to the extent that lawmakers do not change the program. Since the 80s, there have been three major reforms to civilian federal employee retirement programs: the 1984 reforms which created FERS (and closed CSRS), the Middle Class Tax Relief and Job Creation Act of 2012 which created FERS-RAE, and the Bipartisan Budget Act of 2013 which created FERS-FRAE. There are consistent proposals to further restrict FERS benefits, along with some to increase benefits. Whether those changed are enacted (or whether they would apply to current employees and not just newly-hired employees as have all previous reforms) could further change this analysis.

Not the answer you're looking for? Browse other questions tagged united-states roth-ira pension or ask your own question.

12
Reached the AGI for Roth IRA - now what?
4
Variable Annuity inside a Roth IRA? What is this and how can I switch it to something else?
4
How do I estimate the future level of my Roth IRA?
3
Can you re-contribute withdrawn Roth IRA contributions?
3
Cons of withdrawing money from an Roth IRA account?
1
How can I estimate future pension pot limit?
2
Is UK part of my EU state pension lost after brexit?
0
Variable Annuity Vs Roth IRA Vs 401K. Pros & Cons of Investment Plans
3
How do I figure Roth IRA withdrawals after converting multiple times?