I reproduced table charts for US Steel from controversial Jesse Livermore's book How to Trade in Stocks in a line chart form (see pages from 58 as appeared on PDF) in an attempt to understand rules better and see if I can program it into algorithm.

The commentary provided with the table in a book doesn't provide explicit calls to action (buy / sell), except the very first buy signal (June 2nd).

That's why I want to discuss the reasonable course of actions here according to the rules, which the author intended to follow. I've highlighted some points on a chart to discuss. 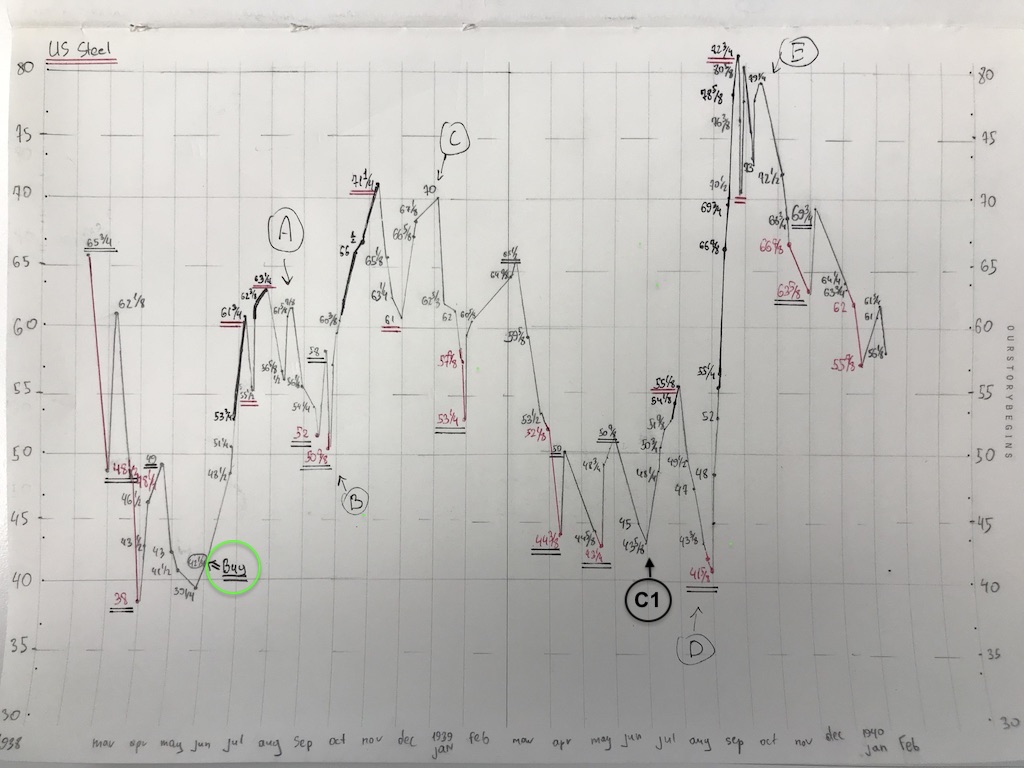 • Buy (green circle) – that's the only explicit call to action that appear in a book. It's justified by rule 10-F.

Yes. The charts show nearly two years of data but Jesse mentions only one trade. We’ll never know why he did that. According to his rules there seem to be more signals. Also, when we look closely, there appear to be other inconsistencies so I understand your uncertainty. The initial long entry, shown by the green circle on your chart, is preceded by a DownTrend with a Pivotal Point at $38. There is a rally from $38 which reaches $49, and then there is a reaction which attempts, but fails, to continue the DownTrend. Another rally begins from $39¼ and it is from here that your green circle shows the long entry at $42¼ (10-C, 10-D, 10-F).

• A – according to rule 10-E, the rally stops a short distance below previous pivotal point in the Upward Trend column. Thus, does the author suggest I should close out my position? And once the price pierces 3 points from 70 = 67 should I go short?

Jesse refers to each $1 move in the stock price as being a “point”.

He also refers to “points” on the chart (as in “Pivotal Point” etc.).

This mixed terminology can be confusing so I am going to use $ prefix for prices.

Now let’s look at Point A on your chart.

Jesse makes no mention of any exits or reversals in the example given, so it appears that he either doesn't recognise his own signals, or there is more to his decision-making than he reveals in his book, or he wants us to work things out for ourselves. Let’s assume the latter. So, leading up to Point A we can see a rally from the Green circle to the pivotal point at $61¾ (Rule 4-A). Then there is a reaction down to $55½ followed by another rally to $63¼ (Rule 6-D). This rally to $63¼ technically continues the Uptrend, but only by $1½. This is insufficient to register as a proper continuation (for that it needed to get to $64¾) . So it fails. Now the reaction from $63¼ is a warning that the Uptrend may actually have finished (Rule 10-A). This warning has an action/ exit point at $58¾ (61¾ - 3 = 58¾ [10-B]) and this is reached on Aug 4th which occurs in the “dip” immediately preceding Point A. Following the book's rules, the question arises: should the long be closed or reversed? If Jesse’s buy pattern is followed, a reversal would seem appropriate, however I believe a simple exit is preferable. The “Livermore trading rules” don’t include money-management but Jesse disclosed elsewhere that a trader should risk no more than 10% of invested capital (Smitten p.85) and should aim for at least “10 points” of profit (Smitten P.86). Combining this information with the Livermore trading rules, minimum stop loss is 3¼ points, and risk:reward is around 1:3. If a short position is taken at $58¾, a stop should be set at $62 ($3¼ is the least amount beyond $61¾ that would question the validity of the short and justify taking the stop loss). Further, a short at $58¾ should not be entered unless there is good prospect of reaching $48¾. But the chart shows a Pivot Point immediately ahead at $55½. So risk:reward is not adequate to justify the short. On the other hand, a simple exit at $58¾ gives a gross profit of $16½ on the first trade. It’s a good time to take profit.

• B – According to rules 10-C and 10-D, downward trend didn't extend by 3 points, suggesting Downward trend is over once price pierces 52+3=55. Should I go long, should I close short if was opened on a previous step?

A short is indicated at $56 1/8 on Aug. 29th which is a little after your Point A and is a break of the previous Pivotal Point. This is followed by your signal to go long at $55 but this signal is weakened by the proximity of an overhead Pivot Point at $58. A decision should be delayed until a clearer indication. Clarity comes at $59¼ on Sept 30th. At this point a defined Uptrend has begun despite still not being clear of the Pivot Point at $58. Meanwhile, the short is underwater by $3¼ which is another sign that the long side is the right side. At the risk of whiplash this is the time to reverse (loss of $3 ¼ on the short trade).

• D – In case long was entered in C1, how do I justify my actions? I guess I'd be scared there for my long. In case long was not entered, where Jesse would enter it: on a pierce of 55 1/8 by 3 points, or would he just ignore it?

The entire exercise yields $66 gross profit over a span of two years. After allowing for brokerage and slippage we could round the net down to $60.

At the beginning of the two-year period, when the the stock price is around $50, I would need $50 to get into the market and I would also need to commit reserve capital to cover risk (eg what if I had four losses in a row at the beginning of the exercise). So let’s say I allow for these additional risks and sundries by committing additional capital of $50. Now my real investment in the exercise becomes $100. And I need to be prepared to tie up my $100 for two years for $60 ROI.

That’s a ROI of approximately 30% p.a. using the “Livermore method” with prudent capital management and a similar market to the example provided.

But there is another important variable. Jesse chose the steel sector for his demonstration. Presumably this was the most attractive example at the time. Look at the pattern: a price chart that moves from low to high and back again twice in two years, with a healthy range in each year. This is a great scenario, and unlikely in modern markets.

Successful trading is a difficult business.

Not the answer you're looking for? Browse other questions tagged stocks trading technical-analysis or ask your own question.