Why does Geico ask me not to reveal the limits of my liability coverage in case of a car accident?

I read on my "Evidence of Liability Insurance card" issued by Geico in California, US:

What to do at the time of an accident: […] Do not reveal the limits of your liability coverage to anyone.

Why does Geico ask me not to reveal the limits of my liability coverage in case of a car accident, and should I follow that advice? 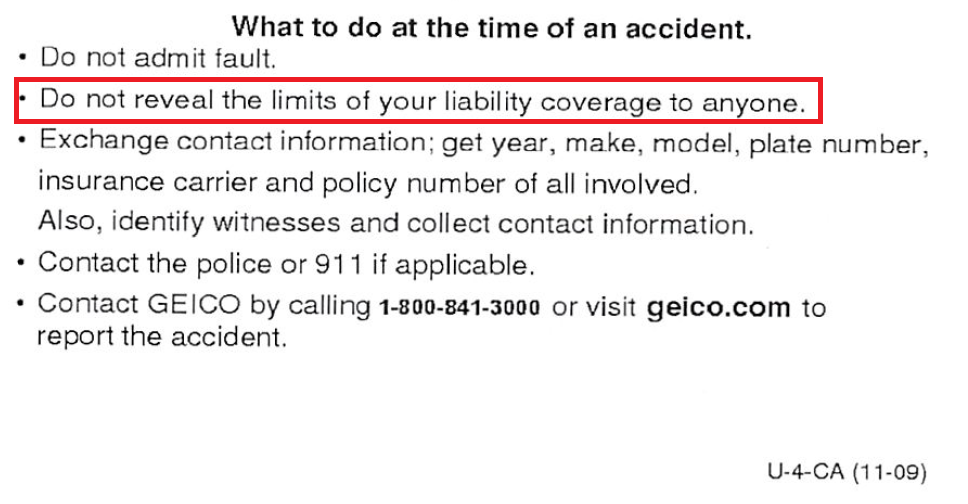 Negotiation 101, never be the first to say a number.

It isn't just GEICO that tells you this, every US car insurance company instructs their customers to not mention the amount of coverage.

Your job is not to negotiate. Your job is to collect the specified information and to hand the claim process over to the insurance company. That is also why they tell you not to admit fault.

The limits of your coverage are completely irrelevant to anything you might do in a situation where your liability coverage is in play. More directly, there is nothing at all for you to gain from providing this information. Another way to look at the question is "why would you want to reveal this information?".

There probably isn't much downside to it for you, personally. Your insurer will be on the hook for any negative consequences (like inflated settlement amounts, at the margins), but your policy isn't going to retroactively change or anything. But the insurer will still want to protect its own interests to the maximum possible extent.

Your contract almost certainly establishes that every element of the settlement, and negotiations around it, will be handled by your insurer. You blurting out information in this situation wouldn't be much better than you interrupting your own lawyer in the courtroom during arguments in a trial.

As a few examples:

In my state (Commonwealth of MA, in US), once the lawyers get involved, the parties involved are legally required to release insurance coverage info upon formal request.

Further, if it goes to trial, the jury is not allowed to know the amount of insurance.

If you know how much money is available, you could be more willing to spend it. You might accept an expensive optional test that you would have skipped if you were paying for it. There's no upside to the other party knowing how much insurance you have. It's only going to lead to higher costs.

All forms of insurance create perverse incentives to bill for as much as possible instead of competing on price. That's why auto glass repair shops often advertise that they will give you cash back if your insurance covers the repair. They bill so much more than their actual cost that they can afford to give you $100 cash and still turn a profit. This is insurance fraud, but it's so common that apparently authorities don't have the resources to deal with it.

Insurance companies want to use coverage limits as a selling point to their own customers, without exposing themselves to this kind of fraud by revealing it to claimants. As another answer notes, coverage limits may end up being revealed in court. But presumably, the claimant would have had to come up with a dollar amount before that.

Not the answer you're looking for? Browse other questions tagged united-states car insurance car-insurance liability or ask your own question.

8
Why would a person not want to purchase a Personal Liability (Umbrella) insurance policy?
3
Method for calculating the wisest amount of liability to purchase for car & home insurance?
7
How to deal with insurance when renting a car from an individual?
1
Car insurance versus personal liability insurance
8
Does liability auto insurance protect any of your assets?
12
Car was stolen and recovered, is now evidence in an investigation and I still have to pay even though I don't have access to it
1
Auto Insurance: Adding another car to the existing policy (GEICO)
0
I have 5 cars and two drivers, can I cover one car with high liability and the rest with the minimum? California