How can all these countries owe so much money? Why & where did they borrow it from?

When I look at this long list of countries with debt, I get the feeling we've all been sold a load of manure. How can so many countries owe so much money? Generally speaking, why did they borrow it, and from where?

The way this looks to me is like a great cup game, where exactly is the pea...?

What am I missing?

** Is is possible that all the players have run the printing presses just a little each time they needed a pick me up to the point where we have now manufactured a net worth that is no longer believable? **

They borrowed it from the people, and typically to finance wars and military spending. For example, Wikipedia suggests that the Bank of England "was set up to supply money to the King. £1.2m was raised in 12 days; half of this was used to rebuild the Navy." It's a game that everyone has to play once started; if Napoleon buys an army on credit, you'll have to raise an equal amount or face quite a problem.

As for why they've grown so large, it's because governments are quite skilled at owing large sums of money. Only a small portion of the debt comes due in full at a given moment, and they constantly reissue new debt via auction to keep it rolling. So as long as they can make coupon (interest) and the lump sum at maturity, it's not difficult to keep up. Imagine how much credit card debt you could rack up if you only ever had to pay interest.

This game will continue for as long as people lend. And there are plenty of lenders. There's pensions, mutual funds and endowments, which find public debt typically safer than stocks. And money market funds, which target 1 dollar NAV and only invest in the "safest" AAA-rated bonds to protect it. There's central banks, which can buy and sell public debt to manipulate inflation and exchange rates.

Absent some kind of UN resolution to ban lending, or perhaps a EU mandated balanced budget, these debts will likely continue to grow. You think they "collectively owe more money than can exist", but there's a lot of wealth in the world. Most nations owe less than a year's GDP. For example, the US's total wealth is in the neighborhood of 50 trillion.

By the phrasing of your question it seems that you are under the mistaken impression that countries are borrowing money from other countries, in which case it would make sense to question how everyone can be a borrower with no one on the other side of the equation.

The short answer is that the debt is owed mostly to individuals and institutions that buy debt instruments. For example, you know those US savings bonds that parents are buying to save for their children's education? Well a bond is just a way to loan money to the Government in exchange for the original money plus some interest back later. It is as simple as that.

I think because the debt and the deficit are usually discussed in the context of more complex macroeconomic concerns people often mistakenly assume that national debts are denominated in some shadow banking system that is hidden from the common person behind some red-tape covered bureaucracy. This is not the case here.

Why did they get themselves into this much debt? The same reason the average person does, they are spending more than they bring in and are enabled by access to easy credit. Like many people they are also paying off one credit card using another one.

Others have pointed out that the entities loaning money to the government are typically people and institutions. Recently, however, the US federal government borrowings were largely funded by money printed by the Federal Reserve. The government had to borrow $1.1 trillion from October, 2010 through June, 2011. During this period the FED printed around $0.8 trillion new dollars to purchase US debt. Thus, the US government was not borrowing money from people, it was being funded by money printing. The central bankers call this "quantitative easing". 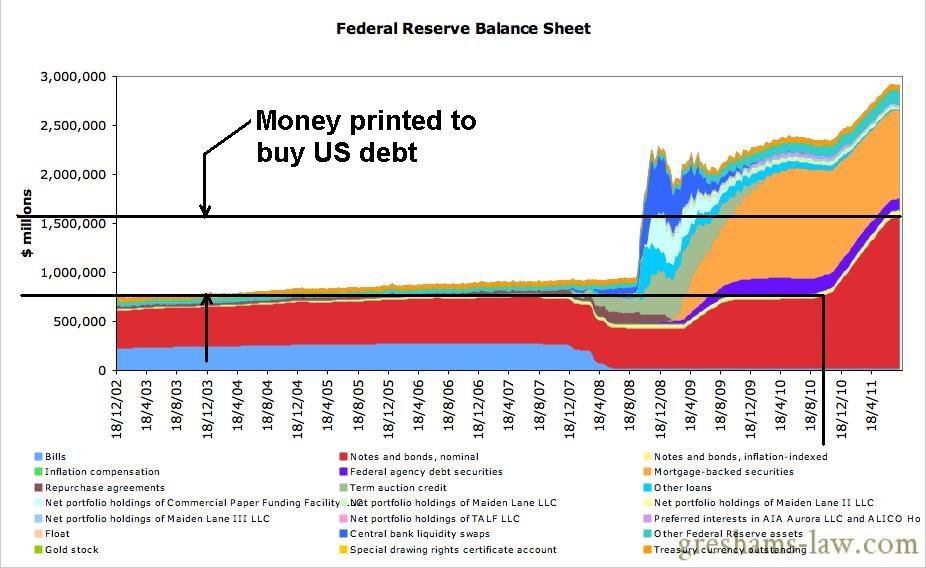 Here is an overview of who owns US Debt from Wikipedia, it indicates that approximately 1/3rd of US debt is held by foreigners (mainly the central banks of other countries), approximately 1/2 of US Debt is held by the federal reserve, and the rest is owned by various America organizations (mutual funds, pension funds, etc). The money is loaned via bonds, treasury bills, etc. When you put money in your pension fund, you very likely buying US debt.

The US Treasury department all has a comprehensive page about how public debt works in the United States here: an overview of public debt from the treasury.

I wasn't able to find a similar breakdown for other countries, but Wikipedia has a comprehensive list of how much debt is owed by other countries: a list of countries by public debt.

Not the answer you're looking for? Browse other questions tagged debt economics international monetary-policy government or ask your own question.

15
If a country can just print money, is global debt between countries real?

23
I spend too much money. How can I get on the path to a frugal lifestyle?
14
The U.S. National Debt: What is it, where did it come from, and how does it work?
1
How can I buy government bonds from foreign countries?