Why can't house prices be out of tune with salaries

I have been arguing for years with my colleagues that having house prices go up 10% pr year and salaries only 3-4% means that we have less money, not more. They in turn say that its not a problem since the equity in their house will make up for it. Now I have been trying to argue against this by saying that eventually prices will be so high that interest rates on the mortgage alone can't be keept down, but somehow I always fail at convincing them.

So I am looking for a simple, convincing argument for why house prices just can't keep rising indefinitely out of tune with peoples real income.

Your friends are overlooking a couple of problems with house prices and salaries being out of whack:

If you want arguments about "for the foreseeable future", instead of "indefinitely", then that's harder.

Those folks should be introduced to some real estate folks I know, they'd get along famously, being as how they still think it's 2007.

The amount of housing out there requires that a large market of consumers is available to purchase them. If housing prices rose infinitely ahead of salaries, the market for potential buyers would continue to shrink until supply would outstrip demand. And then we have the wonderful housing bubble like the one that we just went through (or in some places like China, have the potential to go through).

Short version: It violates the relationship between supply and demand.

Here's another way to think about. Let's assume it is 2011 and we have a married couple who are 25 and make a combined salary of $50,000/yr net. A suitable first house in their area is $300,000, six times their annual net salary. Assuming they could scrimp so that 1/2 of take-home went toward saving for their home, they could save enough to buy the house using cash in 12 years, at the age of 37. Onerous, but they could do it.

But now let's allow salaries to increase by 3% a year and homes at 10%/yr, as in your question, and let's run things out for 20 years.

Now a 25 year old couple at the same sort of jobs would be making $87,675/yr. But the houses in that town would be worth not $300k but $1,834,772. Instead of six times their salary, a house is now nearly 21 times their salary. This means that if they saved 1/2 of take-home to save up for a house, they could afford to buy the house using cash when they were 67 years old.

Mortgages can't save them, since even if they could put down ten years' worth of savings on the 2041 house (that'd be 14% down), they'd still carry a $4.1 million mortgage with a $118k annual net salary.

They can't keep rising with respect to people's income because eventually you run out of buyers. If there's roughly one house for every five people, then you'd better make sure that the price you set to sell your house is affordable to people in the upper fifth of income scales, or else you are mathematically guaranteed not to have any customers.

Now, it's true that the price of particular houses can get much higher, but they tended to be higher in the first place. Housing isn't exactly an efficient market, but for the most part you have to pay for the house that you get, or else someone else will outbid you.

An individual area might, temporarily, buck these trends because it suddenly becomes popular and there are a lot of extra buyers putting money on the table. In the long run, someone is going to build for those buyers, even if it means moving up the chain from enormous rural lots to suburban single-family homes to low-density garden apartments to residential towers.

The three basic needs are food, clothing, and shelter. Housing falls into the third category.

Because it is "basic," housing takes up a large part of one's disposable income. The rule of thumb is that you shouldn't spend more than 25% of your income on rent or mortgages. And that is income BEFORE taxes. Anything much more than that takes up too much of one's budget.

You simply CAN'T double housing's share of the budget from 25% to 50%. Whereas, it's easy to go from 1% to 2% for say, a cellphone upgrade. In the long run, housing prices are constrained by the size of people's housing budgets, which in turn are tied to incomes.

Nowadays, that includes FOREIGN buyers. So there may be a case where west coast housing prices are driven up by Asian buyers, or Florida housing by buyers from Latin America, driving Americans out of local markets.

There's a few things going on here. If we fixed rates (and terms) over time we'd expect a pretty tight chart of home prices to income, almost lockstep. Add a layer of growth above that in boom times due to the wealth effect (when stocks are way up, we have extra money to blow on bigger houses) and the opposite when markets are down. Next, the effect of rates. With long term rates dropping from 14% in 1985 to 5% in 2003, the amount that can be bought for the same monthly payment rises dramatically as rates fall. Easy to lose site of that and the fact that the average size house has increased about 1.5% per year over the last 40 years, surely that can't continue. When you normalize all these factors, houses cost fewer hours-worked almost at the peak of the market than 25 years ago. Mike's logical example of extrapolating out is very clever, I like it. In the short term, we'll see periods that are booms and busts, but actual prices will straddle the line representing the borrowing power of a week's pay.

The big problem with your argument is the 10% per year figure, because in the long term (especially if adjusted for inflation) the prices have not been going up nearly that fast.

Here is a site with some nice graphs for prices over the last 40 years, and it's pretty clear to see that pretty much just what you were talking about happened, prices outpaced the ability of people to pay, which progressively locked out more and more first time buyers, and eventually that breaks the cycle, pops the bubble, and the prices adjust.

There is always of course the choice to NOT buy a house, and just rent, or if you had the feeling that you are near the top of a bubble, SELL and go back to renting. It's interesting to note that in general, rental rates did not increase at nearly the same pace as the prices in the recent bubble. (which of course made it harder for anyone who bought 'investment' properties in the recent 8 years or so to cover their payments via rental revenue.) 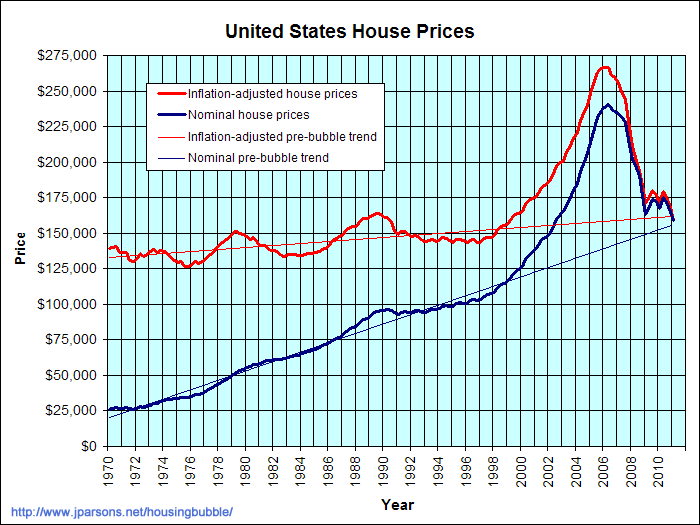 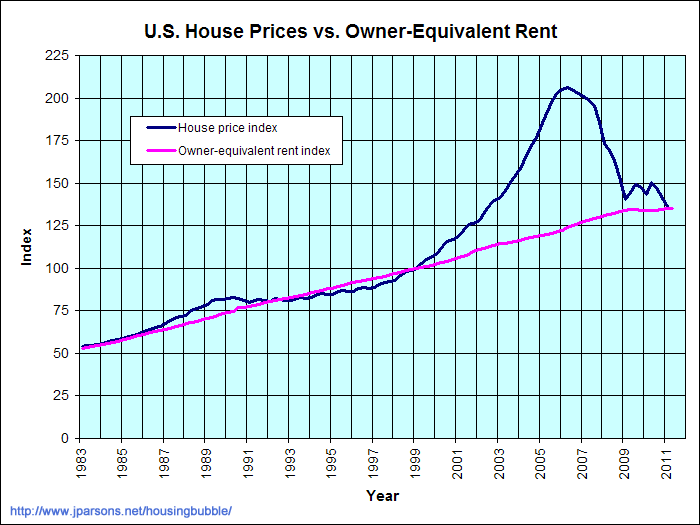 I'd suggest changing the subject when your friends talk about real estate to save your sanity and friendship.

There's a difference between "belief" and "knowledge". Arguing with a believer isn't a very productive course of action, and will ultimately poison the friendship. Reality is a harsh mistress.

Not the answer you're looking for? Browse other questions tagged mortgage real-estate home-equity or ask your own question.

3
How to account for a shared mortgage in QuickBooks Online?
10
How should we handle the house if it doesn't sell?
2
What explains high house prices in popular areas?
7
I'm under contract for a house, but I'm moving away suddenly. Still purchase as an investment?
0
How do owners of one home make money on the sell-and-buy process?
6
Products for withdrawing from a home's equity?
5
How to obtain "Negative Equity Insurance" aka "Home Equity Protection" aka "Equity Protection Policy" in the UK?
4
Implications of buying a house during/ after a stock market crash?
14
Why would you let your mortgage default if you can afford to keep paying it?